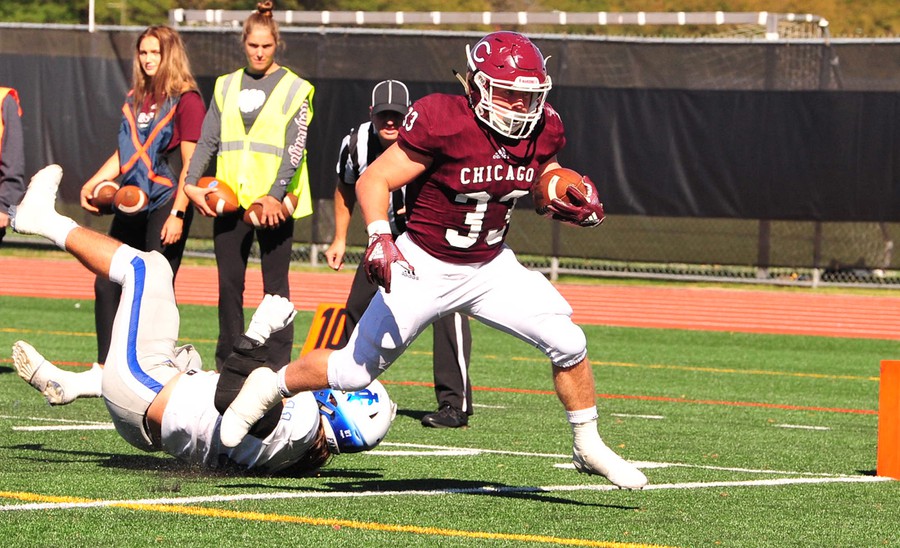 First-year Nicholas D’Ambrose avoids a tackle as he runs down field.

This weekend, the University of Chicago alumni and parents are all invited to campus for a weekend of fun and spirit, while reconnecting, reminiscing, and tailgating. This event, Homecoming, reflects the University’s strong commitment to supporting and including its students and families in the school community. While the hot dog stands and T-shirt tents are sure to attract many students and Hyde Park residents, we certainly should not forget the focal point of Homecoming. This year, the University’s football team is hot and demanding an audience. This article is a call to all those who will be on campus this weekend and wish to celebrate the time spent at the University. In the midst of your nostalgia—or overwhelming relief—Stagg Field is the only place to be this Saturday at 2 p.m.

This Saturday, the Maroons will be hosting Ripon College at 2 p.m. as one of their final regular season conference games. Overall, the Maroons have gone 4–3 this season and 2–1 in the conference. While Ripon brings a slightly higher winning record to this Saturday’s match (5–4), a look at each team’s statistics reflects some key game-time differences. From the statistics alone, it’s impossible to attribute this season’s success to any one part of our team. This season, the defensive line has shut out teams three times so far. From last Saturday’s game against Beloit College, the 102 yards allowed by the Maroons were the least they have allowed in over six years. On the offensive end, the passing yardage of this season adds up to an incredible 1,516 yards. Ripon, for comparison, stands at 598. According to the athletics department’s football preview, the Maroons’ net yards rushing in the game against Beloit proved to be the team’s most since a 2007 match against Eureka College. Major score inequalities are nothing new to these players, racking up two huge 49–0 wins earlier in the season, and most recently a record-breaking 63–0 win against Beloit.

The skill and passion of the team are what have led it to some major victories this season. Fourth-year defensive back Jeremy Vincent made it clear that there is much more to this team’s success than simple conditioning, play memorizing, and team building. Vincent said that on the individual level, a player “can’t really be successful if he or she doesn’t have a work ethic or drive in the classroom, and it’s the same way on the football field.” When asked how the team was preparing for Ripon, Vincent mentioned “small adjustments as a defense,” and also that the program has “been making sure everyone is assignment sound during the week so [the team] can just go out and play.” The knowledge that the football team believes in a correlation between academic and athletic success is truly inspiring and wholesome.

As a fan, it is sometimes difficult to understand the meaning of the game in the perspective of an athlete. Vincent emphasized the pride he has felt in his games and the significance of Homecoming. He wrote how Homecoming has been a “pretty special game because it’s a chance to play in front of family and friends. It’s one of the few times during the year where almost the entire school, families and alumni are on campus at once, so it’s a cool experience to have everyone coming together again.” When asked if the fans contributed to the outcome of the games, Vincent was absolutely convinced they do. He found it difficult to describe the “certain energy they create.” In an attempt to put words to feeling, he highlighted the importance of fans: “[Fans] may not realize it but the energy they give off with the yelling and screaming during the game really gets the team going and motivates us more.”

To those who will be on campus tomorrow, if the statistics or the good weather forecasted for Saturday have not already convinced you to attend this Saturday’s game, perhaps Vincent will. He wrote that the team “always appreciates when people sacrifice their own time to come watch us play, so we want to make sure we use that energy they give us and put on a show!” The Maroons will be playing Ripon College this Saturday at 2 p.m. on Stagg Field as a part of the University’s Homecoming weekend.