Class of 2022 Participates in Dear World During Orientation 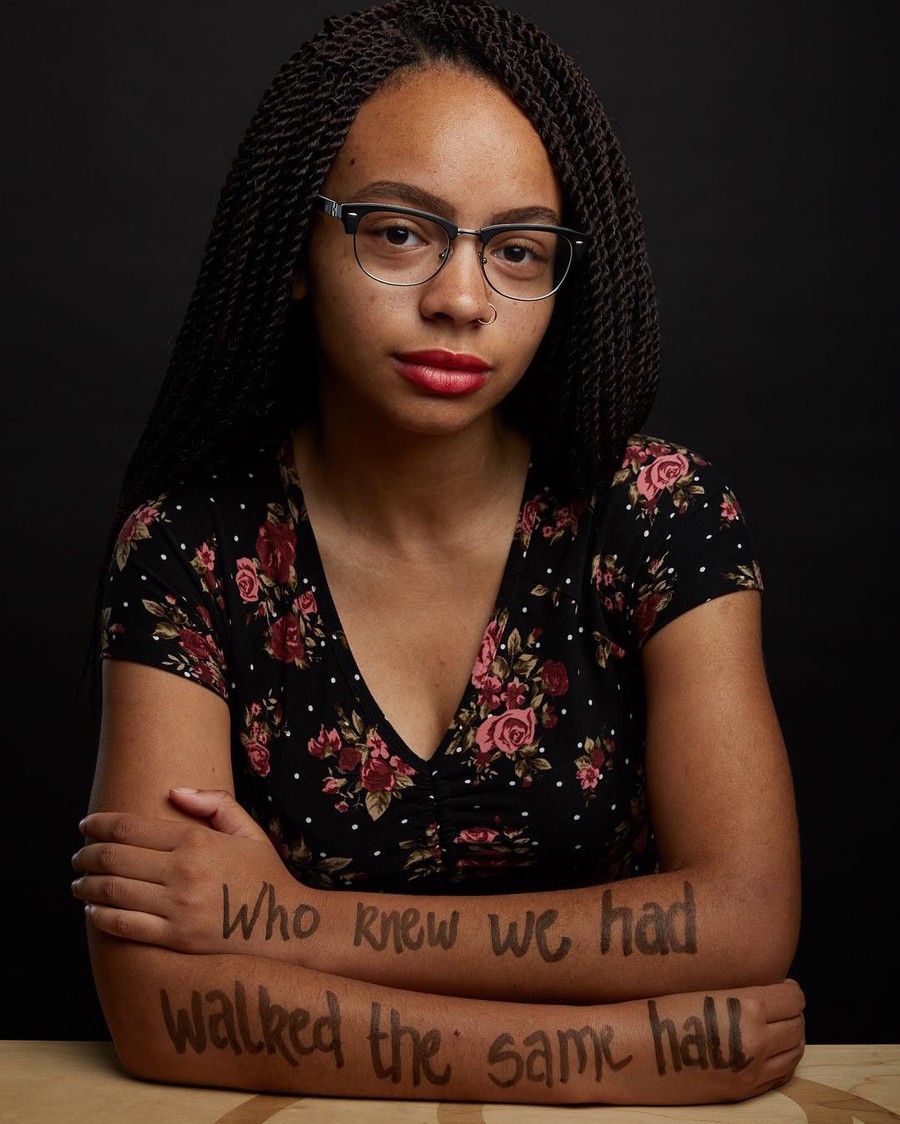 As part of O-Week, the College invited Dear World, an organization which uses interviews and photos to document people’s experience, to campus. The goal was to help the Class of 2022 introduce themselves to each other.

Staff in the Center for Leadership and Involvement learned about Dear World during a conference where staff from another university reported positive experiences with the program, according to assistant vice president for student life Michael Hayes. After later conversations with Dear World, the University decided to pilot the program during O-Week this year.

“Our goal was to offer a distinctive way for students in the Class of 2022 to build community, foster authentic connections and conversations with each other, and increase their sense of belonging on campus,” Hayes said.

During a Dear World session, participants are asked to recall and write a short summary of a poignant memory. Then, with the help of a peer listener, participants select a phrase to write on themselves with a whiteboard marker. A Dear World photographer then takes a photograph of the participant with the phrase clearly visible, whether it be written on their arm, face, hands, chest, or elsewhere. Afterward, participants are invited to call a phone number in order to tell their stories, which are then transcribed and stored on an online database.

“I was skeptical going into the workshop because I have a lot of trouble writing about myself—mostly because I don’t think I’m an interesting enough person to write about,” first-year Emma Van Lieshout said. “But, the Dear World process of coming up with a story was really helpful, and I was able to come up with something that was meaningful to me—even if it wasn’t really that ‘important’ or ‘interesting’ of an event.”

Over a period of two days, the Dear World staff held programs with the Class of 2022, helping them develop their stories from simple phrases or terms, then to vignettes, and then from vignettes to stories. The program, which consisted of single one-hour sessions, was billed as mandatory. However, only about 1,000 individuals, just over half of the incoming class, participated.

Several students told The  Maroon that they avoided the program, for reasons ranging from not wanting to share emotionally traumatizing experiences, to not wanting to write on themselves or simply just wanting to do something else at the time.

“I didn’t go because I had heard about other people’s bad experiences with feeling pressured to go into traumatic stories, and because it seemed too forced a way to talk about personal issues with people who I didn’t yet know well,” said a first-year who wishes to remain anonymous.

Several students who attended the culminating session remarked that the hall, which was filled to the brim for “Campus Life Meeting: Free Expression” only a few hours earlier, appeared abandoned by comparison.

Stories shared at the Dear World event ranged from experiences with sexism and racial discrimination to uplifting tales of finding support in unexpected places. After students developed their stories, they moved to Regenstein Library where they had their portraits taken.

Robert Fogarty founded the organization in 2009, after spending a year helping the city of New Orleans recover from Hurricane Katrina. His goal was to help New Orleans residents tell their story.

“I interviewed people about the city and asked them why they loved it,” Fogarty said. “After a while we started to center those interviews around an accompanying portrait that people came to know and love: the message on their skin. So it’s evolved for sure from a kind of a local journalism project into what I’m really proud to say is a way to connect people through their meaningful and honest stories around the world.”

Over roughly a year, Fogarty was able to photograph over 5,000 portraits of people all around New Orleans. Since then, Dear World has recorded the stories of over 100,000 people around the globe. Among others, the project has helped narrate the stories of war refugees in Sudan and survivors of the Orlando Pulse nightclub shooting. The late ESPN sportscaster Stuart Scott’s Dear World portraitgraces the cover of his posthumous memoir, Every Day I Fight.

Just before O-Week, R.A.s participated in their own Dear World session. However, many R.A.s felt needlessly trapped by the structure of the session. Additionally, they felt like the process was inordinately prone to bring up traumatic memories, rather than happy ones.

“The process definitely brought up very traumatic memories, and the brainstorming process felt incredibly rushed,” said fourth-year R.A. Leslie Schmuldt. “There were memories that I didn’t want to share, but because of the video they played first—which created a very emotionally charged atmosphere—I had a difficult time thinking of anything else. So I was desperately trying to come up with something else to say, which was incredibly stressful.”

In addition, several R.A.s found that their portraits had been posted to an external website without their permission. This drew concern from some that the program was more interested in benefiting itself than its participants.

Thanks to these concerns, several R.A.s led by third-year Brittney Dorton put together an online document which other R.A.s could share with first-years, detailing what to expect during the session and offering recommendations for engaging with it.

“Practicing vulnerability can be a valuable experience, and participants may enjoy sharing their stories with others,” the document reads. “However, we recognize that this is a space in which some students will not feel safe doing so. Our goal is not to prevent students from taking part in this experience or from stepping outside of their comfort zones, but rather to ensure that they are able to engage with the program in a manner that is intellectually critical, productive, and healthy for them.”

“I was a little reluctant at first because it requires you to be very vulnerable, but I knew that my story was important and it deserved to be told,” Rosado said of the Dear World program. “After I finished, I felt accomplished and relieved and people gave me a lot of good feedback. I felt stronger—and I felt like I made some difference.”

“Dear World was really helpful because I realized that our stories didn’t have to be special to be worth telling,” Van Lieshout said. “That’s a concept that I hadn’t really thought of before: That my experiences could be important, not necessarily because of their content, but because they were mine.”