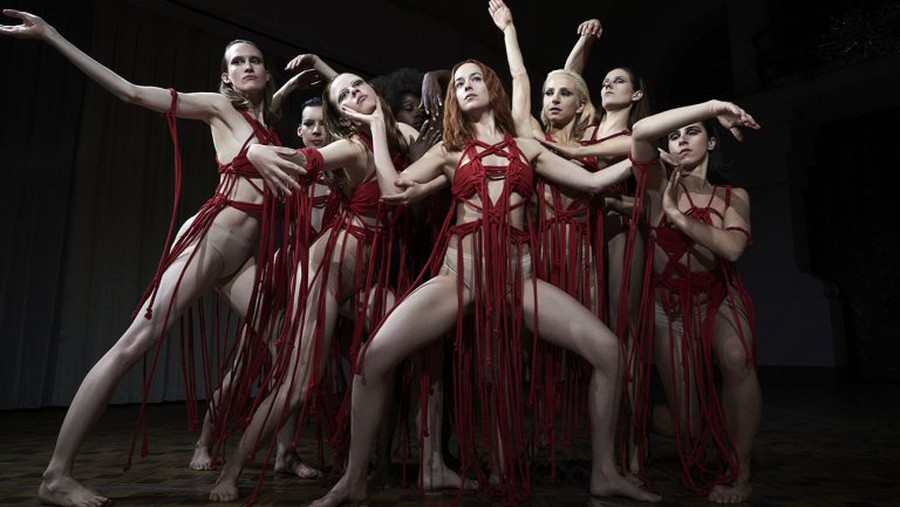 This "Suspiria" remake is filled with body horror and gore that will make your skin crawl.

Luca Guadagnino’s Suspiria is as similar to the Dario Argento original as it is to his previous work, Call Me by Your Name. The 1977 film is a sleek but straightforward horror flick, famed for its striking color palette and prog soundtrack. This 2018 remake transposes the cult classic’s threadbare story onto our 21st-century desire for ever-more depraved spectacles. While it does not change the original’s 1970s setting, Guadagnino’s “cover version” could only have been conceived exactly now—with our knowledge of the intervening 40 years and our equal uncertainty about the future.

At the film’s throbbing heart is Susie Bannion (Dakota Johnson), a Mennonite from Ohio who appears on the doorstep of the Markos Dance Academy in West Berlin on the eve of the German autumn. The company’s previous prodigy, Patrizia, disappeared under mysterious circumstances assumed to be related to recent left-wing terrorist activity. Under the tutelage and suspicious influence of Madame Blanc (Tilda Swinton), Suzy quickly takes Patrizia’s place as the academy’s principal dancer. Meanwhile, unbeknownst to her, the matrons of the academy, being a coven of witches, have planned a ghastly role for her in an impending occult ritual. Their plans are slowly revealed when Josef Klemperer (also Tilda Swinton), the missing dancer’s psychoanalyst, begins investigating his client’s ostensibly paranoid delusions about the company.

As its plot descends into degeneracy, Suspiria rigidly adheres to an austere color scheme tailored to its Cold War setting, eschewing the giallo original’s vibrancy. But while many films set in the shadow of the Berlin Wall contain little aesthetic excitement, Suspiria’s director of photography Sayombhu Mukdeeprom is able to match the original’s visual flare. Expert application of light and focus, overlaid with an (authentic) film grain, endow each frame with a fascinating texture. Complementing this visual spectacle is a sonic one, courtesy of Radiohead’s Thom Yorke, whose lyrical score is in many ways the highlight of the experience.

As Suspiria’s “six acts and an epilogue set in divided Berlin” unfold, its horror conceit sharply diverges from the mere unease that characterized the original. Instead, the adaptation puts more emphasis on dance and motion—with body horror scares that make your skin crawl. The witches use their students to weave spells, channeling the movement of their bodies to manipulate those of their victims. The torture is physical: Bodies are bent beyond their limit and uncannily disfigured, while the camera observes unflinchingly. The film’s climax is coated in gore, carefully displaying each decapitation and disembowelment during the witches’ sabbath. Here is where Suspiria casts a spell of its own: Torn between revulsion and fascination, it is hard to look away.

While horror may be Suspiria’s most primal aim, it also harbors other ambitions. Besides adding almost an hour to the original’s 92-minute runtime, the new script adds a political dimension to the story. It continuously references the historical bombings, kidnappings, and hijackings that are purportedly occurring outside the mirrored practice rooms of the academy. And of course, no picture with this setting may leave the scars of Nazism unexamined. These gestures are not subtle—there are references to the history of the German people through fascism, motherhood, and witchcraft. But their intended goal is not made explicit, and the allusions are mostly used for aesthetic rather than thematic purposes. In spite of this shallowness, Suspiria remains a haunting Cold War fairy tale, as much influenced by Goya’s Black Paintings as it is by the original.