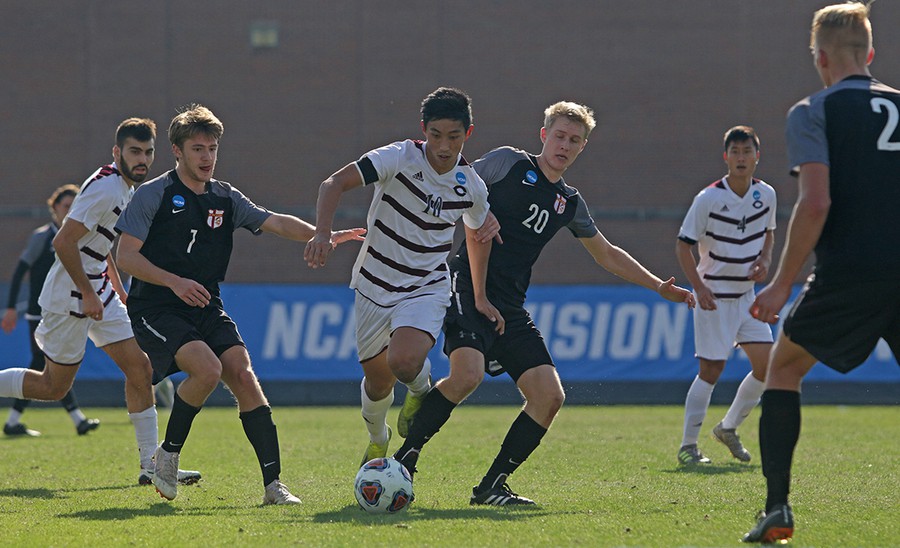 The UChicago men’s soccer team’s impressive season and postseason run came to an end on Friday, November 30, in Greensboro, North Carolina, as they were defeated 4–1 by Calvin College in the semifinal of the NCAA Championship. The two sides had met before at Calvin on September 22, when a 50th-minute goal by fourth-year Matthew Koh proved to be enough to give the Maroon men a 1–0 victory despite being outshot 19–9. This time, however, the Knights showed themselves more able to finish their chances, with 11 first-half shots turning into three goals. Calvin opened the scoring in the 28th minute, then added another less than two minutes later with a shot that went in off the post. However, the 2–0 lead lasted less than 30 seconds as Koh beat two defenders on the end line before assisting third-year Dayo Adeosun. Calvin added another in the 44th minute, and despite outshooting their opponents 6–4 in the second half, the Maroons could not break through. In the 66th minute, a Calvin counterattack put the game out of reach, and it ended 4–1.

Despite the loss, the Maroon men had a strong season, securing their third-straight UAA conference title. They closed it out with a solid performance in the NCAA Championship, pushing through to the quarterfinals by defeating Carleton 2–1 and Trinity 2–0. Against quarterfinal opponents Luther, the dominating Maroons were frustrated again and again, racking up a total of 27 shots during regulation while the score remained 0–0. Eight minutes into overtime, in a series of quick passes by the Maroon men, fourth-year Max Lopez played the ball to Adeosun. Adeosun took only one touch, passing it straight back to Lopez and giving him space to fire the winning goal past Luther’s goalkeeper.

The Maroon men lost only three games all season, going 6–1 in UAA conference play. An excellent record of 18–3–1 seems a fitting finale for the five Maroon men playing their final seasons here at UChicago. They are fourth-years Nicco Capotosto, Matthew Koh, Max Lopez, Zachary Pierce, and Josh Scofield, and they complete their time here with an overall record of 66–11–8 and three consecutive UAA titles, the winningest in program history. This is not the only record this exceptional group has set. Lopez leads the program in goals with 54 over his four years, while Koh holds the program record for assists with 34. While disappointed to fall in the semifinal, Koh showed nothing but optimism when asked about his years in the program and the team’s future without his graduating class, saying, “I couldn’t be more proud of everything this team has accomplished this season and everything my senior class has accomplished throughout our careers. It was an unfortunate ending, but there is no doubt in my mind that one day this program will bring home a national championship.”