Portugal. The Man. The Band. 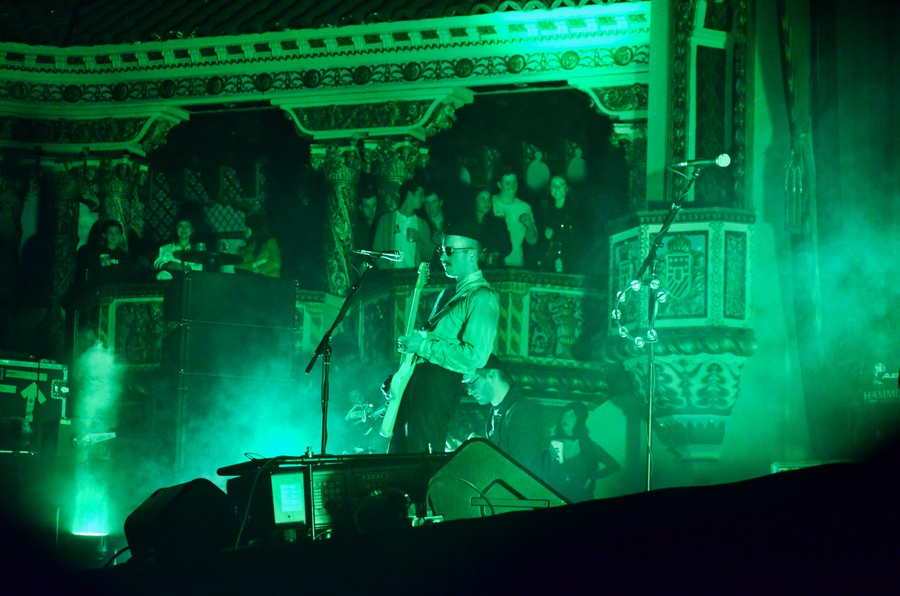 Friday night, the iconic Aragon Ballroom was overrun by an unlikely mix of Pacific Northwestern-looking rock fans with tattoos, union shirts, and flannels, college kids with Manic Panic–dyed hair, and a handful of clean-cut couples in their 60s. The evening’s draw was the Alaska-based rock band Portugal. The Man touring for their latest album, Woodstock.

No concert truly starts until someone sloshes beer onto your sneakers, and some very excited fans happily obliged when the opening band, Twin Peaks, strolled on stage for an enthusiastic, if overwhelming, set. The audience shrieked and writhed along with the band as they thrashed about on stage, looking like the boys of Stranger Things as pothead philosophy majors. Their 1960s garage-rock sound, complete with over-the-head guitar antics, filled the cavernous space and swallowed up most of the lyrics. During an extensive 45-minute set, the two intelligible lines I noted were, “Tripping through the sewer,” and, “Keep it together,” so I can’t speak much to their lyrical abilities. Even if I missed most of the words, there was something exciting about the band’s earnestly goofy energy and music steeped in The Rolling Stones and The Beach Boys. Guitarist Clay Frankel’s eel-like shimmies and mic-grabbing antics made for an amusingly fresh stage presence even though the band has been performing since 2010. 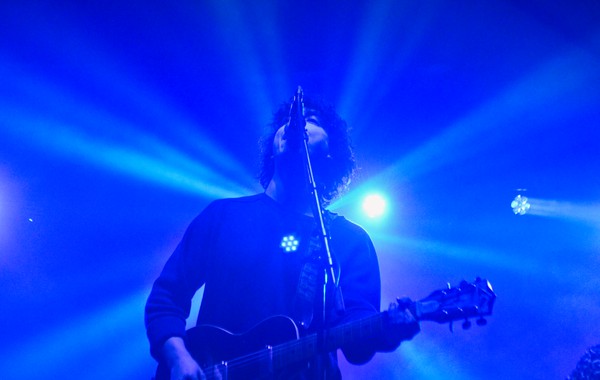 The Chicago-based Twin Peaks was formed in 2010 and has released four albums.

Then the lights went out and the shrieks, gasps, and relentless drums of Kanye West’s “Black Skinhead” filled the darkness...only to be followed by the saccharine sweetness of the enduring ’50s ballad “Unchained Melody.” Having thoroughly disoriented the crowd, Portugal. The Man walked out to rapturous applause and, without a word, launched into an extended guitar and drums riff; guitarists John Gourley and Eric Howk occasionally turned their backs to the audience, heads down, fully absorbed in their instruments.

While its recent Grammy win for the infectiously upbeat “Feel It Still” has launched the band to mainstream fame, Portugal. The Man continues to perform like under-the-radar musicians who care more about the music and their fans than stardom. There is no spotlight; when the light display fades, the duo is often lit only by screens behind them. The banter with the audience that is common to casual performances like this was shy and limited. As they began to play, the video behind the band members displayed the message, “We are not very good at stage banter, so tonight’s performance will feature some slogans written by our management. Thank you for your continued understanding.” True to their word, most of the audience interaction was through questions on the screen, asking if they liked to smoke weed (which received a hearty cheer), checking that they were at the right concert, and thanking them for downloading (or stealing) their album.

After the solo, the band led off with a single from its 2013 album Evil Friends. The falsetto groove of “Purple Yellow Red and Blue” became increasingly frantic; its bassline slowly warped, and the chorus, “All that I needed/ Was something to believe in” took a plaintive edge, accompanied by rainbow lights and swirling oil slick patterns. A tightly coiled bassline propelled the contemplative melancholy of “Number One” before melting into the louche sprawl and drum kick fillip of “Live in the Moment.”

Woodstock is the band’s most arena friendly, bombastic rock album, dabbling with jingling tambourines, voice distorters, and guest vocalists. There’s a little bit of the shimmery MGMT funk in “Keep On,” a heavy touch of The Black Keys’ unhurried ’70s grunge in “So Young,” and the soft “oohs” of “Tidal Wave” evoke The Neighbourhood. Even the album cover—a crisp photo of a glossy black car engulfed in smoke—is a distinct departure from previous covers, which featured surrealist images of a humanoid figures with horns or three eyes.

Live, the band sticks to its alt-rock roots, trading in slinky topline drums for extended guitar passages and a richly textured low-end from bassist Zachary Scott Carothers. In the multi-layered wall of noise, Gourley and Howk’s nasal head-voice vocals often struggled for air, trailing behind the ferocious drums. After retreating for the first few verses, the funky beat of “Noise Pollution” swallowed up the chorus for a muddled mess of skittering cymbals and keyboard. Toward the end of the set, a mellower bass, rich as umami, suffused the ballroom and the vocalists finally found themselves in control, cresting the wave of sound.

It’s this shy earnestness that makes Portugal. The Man so much fun to experience live. They are first and foremost musicians, there to perform music, not show ponies caught up in gimmicky antics. Woodstock may be their eighth album in 12 years, but on stage it still feels like their first show, a group of high school friends playing their hearts out, oblivious to the rest of the world.