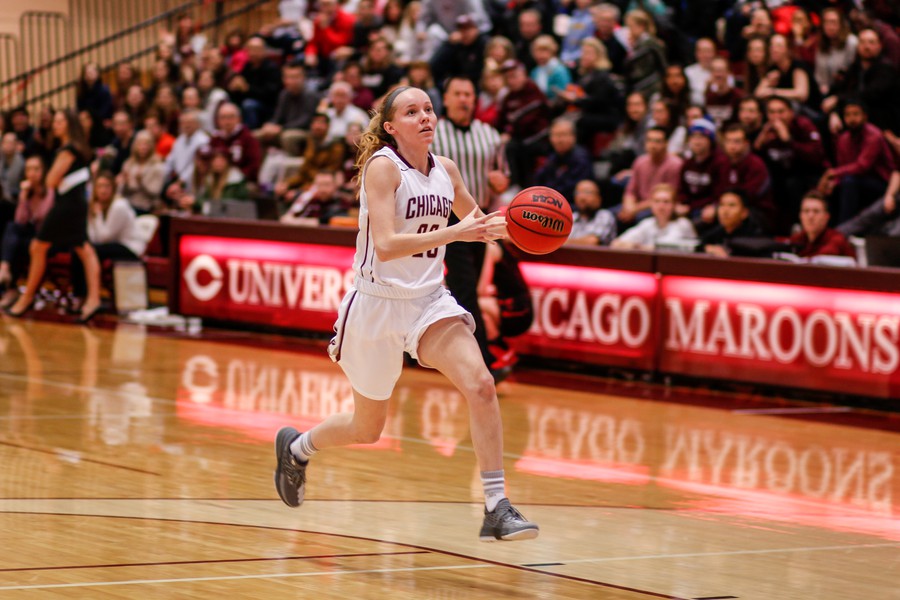 Second-year Miranda Burt has a breakaway against Wash U.

The University of Chicago women’s basketball team concluded its regular season this past Saturday, with a 96–90 victory over Wash U. The Maroons not only captured their 21st straight win, but remained undefeated in UAA play (14–0), the seventh occurrence in league history.

The Maroons set the tone from the beginning, taking a 21–15 lead at the end of the first quarter and extending it to 47–37 as the first half ended. Second-year Mia Farrell found her rhythm, scoring 12 points during this period, with third-year Olariche Obi scoring 10 points to maintain the lead.

The second half began with second-year Taylor Lake making a layup and scoring two free throws, making it 51–37. The lead was extended to 18 as second-year Miranda Burt scored a three-pointer and first-year Marissa Igunbor followed with a layup.

The Bears continued to attack, however, going on a 17–7 run in the third quarter to bring the lead down to eight at 66–58. They outscored the Maroons by a 21–19 margin. Almost halfway through the fourth quarter, the deficit was lowered to seven. The Maroons responded again, thwarting any possible Wash U comeback. Farrell ensured the victory by making 8-of-10 free throws in the fourth quarter alone.

Farrell ended the game with a career-high 31 points as well as five rebounds, going 15-of-18 from the free-throw line. Lake contributed with 18 points, three steals, two blocks, and two assists. Obi notched her 14th double-double of the year, with 16 points and 10 rebounds. Fourth-year Elizabeth Nye and second-year Jamie Kockenmeister also scored in double digits, with 12 points and 10 points respectively.

Wash U had the advantage when it came to rebounds, totaling 42 as opposed to the Maroons’ 30, as well as productivity of the bench, outscoring UChicago 36–19. Even when it came to field goal percentage, the Bears edged the Maroons’ 46 percent (29-of-63) with 46.7 percent (28-of-60). However, where it counted, the Maroons displayed their dominance, forcing 22 turnovers from the Bears, and in turn scoring 25 points off of turnovers.

For the second consecutive year, the Maroons will participate in the NCAA DIII tournament. Last year, UChicago was eliminated in the second round in a close game. This year, the team has the potential to go even further, with the cohesion and dominance shown on both ends of the floor.

Burt spoke of the chance to be in the tournament, saying, “I think we have a much smaller team this year, and because of the size of the team we’ve really been able to spend more time individually with each other. As a result, we’ve gotten closer off the court and performed better on it. The first-years came in and bought into our mindset and goals. The fourth-years have so much experience and their leadership has been invaluable. Our experience last year as well as in the tournament makes us feel so much more prepared going the second time around. I think the combination of these things will lead us to success.”

The Maroons will take on Wisconsin Lutheran (WLC) this Friday at 5:30 p.m. in St. Paul, MN for the first round of the NCAA DIII tournament.