Trolling in the Age of Trump

Trump supporters are more interested in provocation than in meaningful dialogue. 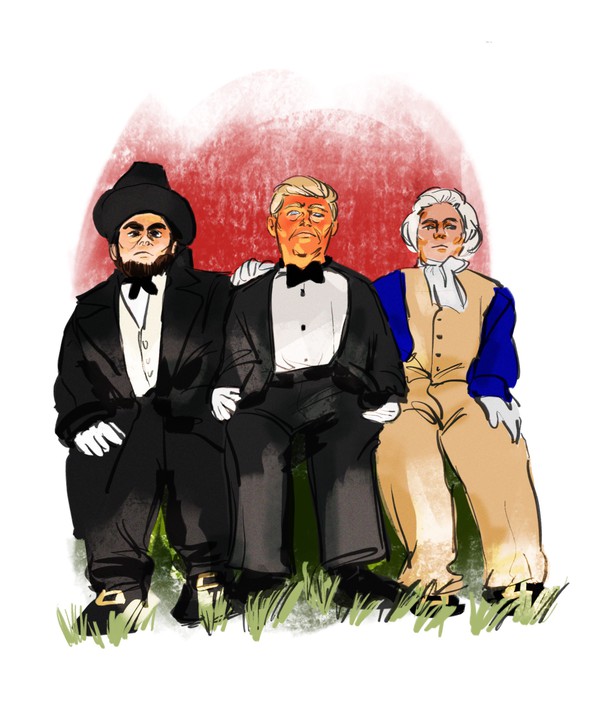 Even in one of the most liberal cities in America, it’s becoming increasingly hard to get by without witnessing a constant onslaught of bizarre and needless political provocation. This is especially true in university settings— recall the posters on this campus attacking student members of SJP, or the flagrantly anti-Semitic posters at UIC. The provocation extends beyond university campuses, however; a few weeks ago, a friend at O’Hare saw a man stand in front of a gate and bellow, “Donald Trump is president! Thank you all, for making America great again!”  As you might expect, the man appeared more interested in confrontation than with spreading the apparently fantastic news.

In my own hometown, in northern Chicagoland, there’s a house that has been doubling as a belligerent political billboard for over a year. This house hosts a massive (and frankly grotesque) display in its yard, involving a life-size Trump mannequin sitting next to several comparable historical figures (including Lincoln and Washington).  If that isn’t quite garish enough, when I last saw it, the display had been fitted with floodlights, just to make sure that you could see it clearly at all hours of night. It started as a very strange, albeit non partisan, Halloween display with Trump, Obama, and the Clintons, but when neighborhood kids began vandalizing the Trump doll in particular, the other presidents vanished and the display adopted a decidedly more confrontational tone.

That has everyone thrilled. So thrilled, we wake up to find the entire thing defaced on a pretty regular basis. It’s always fixed promptly, the destroyed mannequins subbed out immediately for new ones, each with an expected lifespan of a few days, at most. That fact is disturbing in itself— the "Trump House" inhabitants evidently have amassed a serious inventory of life-sized presidential mannequins. I don’t know how many Americans can claim to bulk order from specialty mannequin stores often enough to court financial ruination, but I’m guessing the answer would be “not many.”

The extraordinary persistence of the Trump House display has led to significant  speculation about the motives behind it. For the first few months, we tried to offer the benefit of the doubt. The display was just an eccentric commentary on the state of the world, or some kind of free speech statement. Or maybe there was some sort of sincere ideological conviction behind it, which would make its creators at best politically foolish, but hey, at least they’d be sincerely foolish.

But the longer the Trump display stays up, the more obvious it becomes to me that communicating a coherent set of values has little to do with it—that a consistent platform of values has little to do with many of the bizarre confrontations people pick, especially in areas that are overwhelmingly liberal. There’s something particularly telling about choice of venue combined with the utter lack of substance; far-right provocateurs are extremely fond of pulling these combative, extemporaneous stunts in places where they know their audience will be consistently incensed.

It’s not simply that these arguments tend to be aimed at unreceptive ears. These provocateurs use the word “Trump” as both a shield and a slur, as with a group of Indiana high school students at a basketball game who chanted things like “Trump, Trump, Trump” and “speak English” at Latino students on the opposing team. That was not an isolated incident. The New York Times reported that the “Trump chant,” often accompanied by a slew of anti-immigrant or racist hate speech, has become increasingly common across the U.S.

The word “Trump” is a crude weapon for some, and a catch-all rallying cry for others, even as it becomes readily apparent that the Trump administration stands for little and accomplishes less. The Trump House display, for instance, remained unaltered at the end of the campaign, when Trump repeatedly backtracked and flip-flopped on a number of issues. It stayed up after the Access Hollywood tapes were leaked.  It stayed up after every major legislative failure and through every policy backtrack (a Mexico-funded border wall, the expulsion of all undocumented immigrants, the revival of the coal industry—the list goes on.). All the while, its “message,” if it could be called that, never became anything more than the lawn-display version of an unprovoked middle finger.

A true partisan might have wavered at some point in there. The Trump display, however, is less concerned with policy than it is with telling the world that nothing can induce its creators to take it down. As with every provocateur who uses the word “Trump” as a jeer, or who feels sufficiently emboldened by Trump’s election to douse liberal neighborhoods with impromptu, incendiary taunts, the point of the Trump House is twofold: to convey a sense of impunity and to make being in its vicinity profoundly unpleasant for everyone who disagrees with it.

What’s become apparent to liberal areas and institutions across the nation is that this sort of behavior represents the next step in the rapid evolution of trolling. It may have once been the case that political trolls hid beneath the relative anonymity of the Internet or within groups of like-minded people. The proliferation of Trump chants and Trump-inspired hate, usually in person and often aimed at students, however, reflects a departure from that tradition. It’s rooted in the idea that Trump’s election is sufficient license for trolls to graduate from spewing hate online to shouting it in hostile territory. The truly disturbing part is just how many people consider that an enticing opportunity. It’s hardly an encouraging sign that so many view their political preferences as something closer to a cudgel than a coherent worldview.  Although vapid belligerence is clearly not a new phenomenon, its sudden rise marks a deterioration in what we use political expression for, as clashes become an end in themselves rather than a means to communicate actual beliefs.