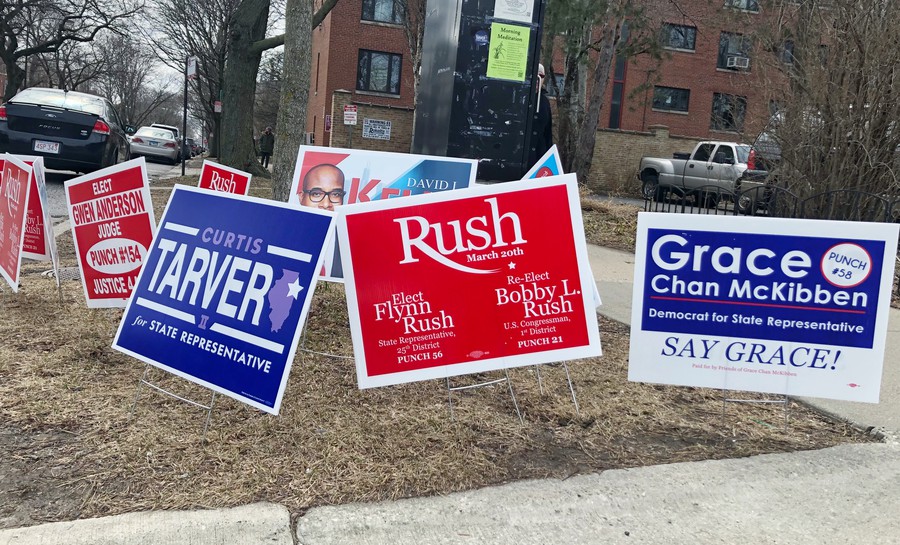 Signs for three of the leading candidates for 25th district state representative on a corner in Hyde Park.

Tarver won against six other Democratic candidates and received 25.4 percent of the vote, followed by Flynn Rush with 16.4 percent and Grace Chan McKibben with 15 percent.

In his campaign, Tarver prioritized criminal justice reform, quality education, job creation, and affordable healthcare. He collected a little under $100,000 in donations, almost double the median of the funds raised by his competitors.

Tarver graduated from the University of Iowa College of Law and practiced private law early in his career. He later worked under Richard M. Daley’s administration in the Mayor’s Office of Intergovernmental Affairs and then on the board of the city’s Commission for Human Relations. In 2014, Tarver opened Illinois’s first black-owned brewery, Vice District Brewing in South Loop.

“It’s such a unique opportunity with so much time between now and January 2019 to work with [Currie] to hit the ground running,” Tarver told The Maroon, noting that he plans to learn from Currie how to build coalitions throughout the state and “lessen the learning curve” before entering into office.

“Fighting for fully funded education for public schools is still the top of the list for me,” he said. “The state should pick up at least 51 percent of the tab.” Tarver’s other priorities include protecting small businesses owners and reducing the prison population by 25 percent by 2025.