All You Need to Know About the Illinois Primaries 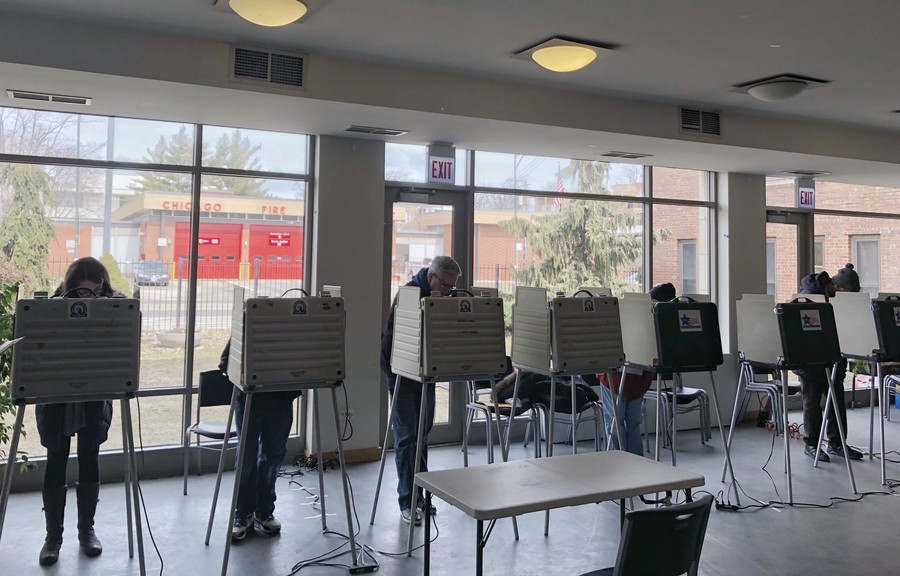 Voters fill out ballots at the Augustana Lutheran Church at 55th and University on March 20, 2018.

On March 20, Illinois voters will go to the polls for the 2018 primary elections. Voters will choose their party’s nominee for several races. Here are some of the races and candidates that will most affect students at the University:

Eight candidates are running for Governor in this primary, two Republicans and six Democrats:

Taxes are a major issue on the minds of voters this election. Currently, Illinois is one of only eight states in the country with a flat income tax rate, meaning all Illinois citizens pay the same percentage of their income to the state.

Another major issue in this race is gun violence. Chris Kennedy, son of Robert F. Kennedy, and nephew of John F. Kennedy, has made his personal connection to gun violence a central part of his campaign.

Candidates have also raised issues regarding sexual harassment and assault, responding to Illinois Speaker of the House Michael Madigan’s alleged mishandling of sexual harassment accusations in his office. Recently, Madigan fired several staffers, including top aide Kevin Quinn, for inappropriate behavior. Despite the firings, however, many Illinois Democrats say that Madigan has not done enough to end the environment of sexism in his office. Many Democrats, including Biss and Kennedy, have called for Madigan to step down.

Madigan presents a unique issue for Democratic candidates, who are trying to distance themselves from the speaker. Daniel Biss continually accused Pritzker of being beholden to Madigan during the most recent debate at the University of Illinois at Springfield.

On the right, incumbent governor Bruce Rauner is facing a serious contest from Jeanne Ives. Ives has attacked Rauner for his relatively liberal positions on social issues, such as his refusal to veto a bill that expanded Medicaid coverage for abortions.

Ives has also been subject to criticisms for her social stances. Ives ran a television ad that depicted women and minorities thanking Governor Rauner for his socially liberal policies, which Ives sees as an affront to conservative values. One particular character in the ad, a trans woman depicted by a male actor, thanked Rauner for letting her use the women’s restroom. The ad’s characterization of trans women sparked outrage against Ives, who responded, “That's exactly what typically a transgender man [sic] looks like.”

Candidates across both parties have attacked Rauner for political gridlock that has plagued the state throughout his tenure. Rauner came into office with a 44-point plan but has seen little success pushing any legislation through the state’s Democratic-controlled Congress.

Recently, Rauner’s ineffectiveness has faced even more heat as he has struggled to resolve an ongoing outbreak of Legionnaire’s disease at a veterans’ home in Quincy, Illinois. The water-borne infection has killed 13 residents since the initial outbreak in 2015. A fourth outbreak was announced on Saturday.

Rauner has resisted moving the elderly veterans out of the home. “Moving them increases significant risk for other infections and other physical ailments,” Rauner told reporters following the most recent outbreak of the disease. “We don’t want to increase the risk of damage to their health.” Rauner spent a week living in the veterans’ home to show that the facility’s water is safe.

On Thursday, the Institute of Politics partnered with WBEZ and Politico to host the Democratic gubernatorial candidates in a public forum, held in the Performance Hall at the Logan Center for the Arts.

Jerry “Iceman” Butler, Rock and Roll Hall of Fame inductee and former vocalist for the R&B group The Impressions, will not seek reelection after representing Hyde Park’s district since 1986.

For the first time in decades, a wide field of candidates are vying for the Commissioner seat in the Democrat-dominated 3rd District. Butler’s lengthy hold on the district means that candidates cannot rely on name recognition for their campaigns. Instead, they are touting their public service experience in order to win over voters. Here are the credentials of the six Democratic candidates and the one Republican in the race:

George Blakemore (R): Self-described “concerned citizen” who has earned a reputation for speaking out critically at Cook County Board and Chicago City Council meetings

Erick Nickerson (D): Mayor of the Village of Dixmoor, on the Southwest side of Chicago

Charise Williams (D): Public servant who has mentored and taught financial literacy on the South Side

On their websites and in public statements, the candidates have addressed health care, taxes, education, and gun violence as the major issues in this race.

Toni Preckwinkle, the president of the Cook County Board of Commissioners, is facing a serious challenge from 2nd Ward Alderman Bob Fioretti. Preckwinkle has been criticized for introducing a largely unpopular soda tax in the county. The tax charges a penny-per-ounce on every sweetened beverage sold in Cook County.

The Cook County Assessor is responsible for assigning values to the 1.8 million properties throughout Cook County. The property tax rate is applied to this value to determine how much each property owner owes the government.

Here are the two Democratic candidates for Cook County Assessor:

Although County Assessor races are usually low-profile, this race has garnered a great deal of attention. This is because the current assessor, Joe Berrios, has been under fire for how he has handled the county’s property valuation system.

According to a WBEZ article, Berrios is accused of taking campaign donations from lawyers who have profited from his management style. Throughout his term, Berrios has set high property values, which many homeowners have said are disproportionate. As a result, some have hired lawyers to appeal their property valuation. Democratic challenger and businessman Fritz Kaegi has called Berrios out for accepting donations from property lawyers for whom Berrios has effectively made a huge demand.

Berrios has batted off his critics by claiming that appeals aren’t the problem with the assessment system. He contends that individuals can handle their own appeals without the aid of lawyers. Berrios also argues that he needs to accept the donations because he, unlike Kaegi, is not a wealthy businessman.

Kaegi has promised to reform the property assessment system to reduce the need for so many appeals. He claims that this will make for a fairer, more streamlined system.

One more Democratic candidate will be on the ballot this primary—but votes for her won’t count. Andrea Raila, founder of Andrea A. Raila & Associates, Inc., a public policy and tax appeal consulting firm, collected the required number of signatures for her candidacy. However, many of these signatures were found to be invalid after Kaegi and Berrios challenged them. Despite being ineligible for election, Raila’s name has already been printed on the ballots for early voting. Any vote cast for Raila will not be counted.

If property tax rates change as a result of this election, students on and off campus could be affected due to changing housing costs. Property owners would likely reassess how much they charge for rent.

An earlier version of this article misstated the name of the incumbent Cook County Assessor. He is Joe Berrios, not Jim. The Maroon regrets this error.

By Cindy Yao and Daksh Chauhan

Challenged over his comments about African-American politicians, Pritzker accepted responsibility but remained confident in his support from voters.