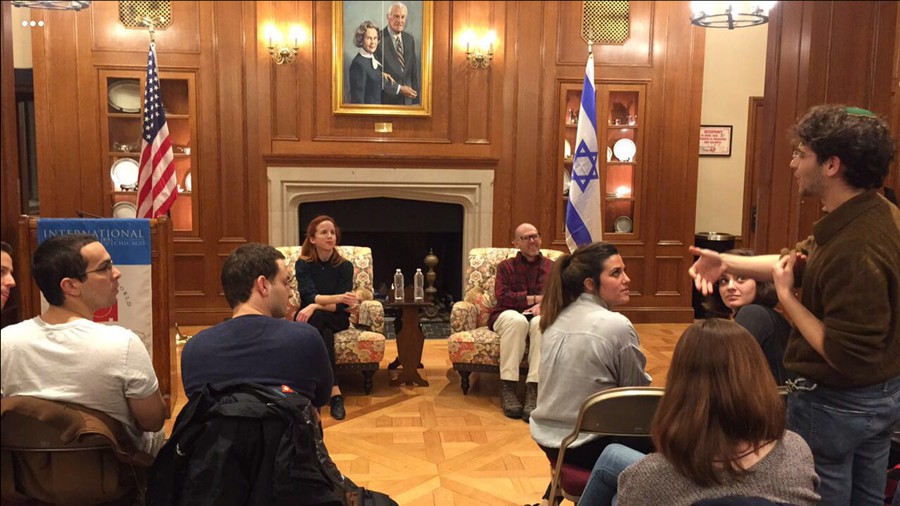 Shaffir's talk was sponsored by UChicago Hillel, J Street, and the University of Chicago Alliance with Israel.

The 32-year-old Shaffir spoke on social reform and politics at an event co-hosted by UChicago Hillel, J Street, and the University of Chicago Alliance with Israel.

Shaffir began her talk by describing the circumstances that led her toward a career in politics. In 2011, she was a full-time journalist, studying for a master’s degree, and living in a crumbling flat in Tel Aviv. Rent was high, and by the age of 25 she was already in debt. “This was the situation of most Israelis,” she said.

Those circumstances drove her to social organizing, but she argued that her initial activism was fruitless. “People are too busy,” she said in reference to her early attempts to form a movement. “Their lives are too comfortable to protest.”

Eventually, Shaffir decided to camp in the streets to protest rising costs of living and crumbling infrastructure. That action became the 2011 Israeli social justice protest, described as the largest protest in Israeli history. “Nobody could remain pessimistic after seeing that,” she said. “Only a few people didn’t believe in the protests…. Sadly, they were in government.”

After the protests, Shaffir said she received offers to join several political parties, but at first didn’t believe the protests she led should be partisan.

Friends and family discouraged her from entering politics. To Shaffir, it seemed as though “an entire generation had given up on the one place where decisions are made.”

But Shaffir realized the only way to fight government corruption was from within. Eventually, with no guidance or experience, she decided to join the Israeli Labor Party.

She won a seat in parliament as a result in the 2013 general elections, attributing her victory to the aid of her volunteers. She soon realized however, that “there was no Politics for Dummies book.” The people who offered help were often those you shouldn’t take any from, she said.

She joined the finance committee, and turned to expert groups from outside politics to help her write legislation.

Having spent a lot of time in male-dominated areas, including the Israeli military, Shaffir never thought that being a woman should preclude her from success.

Still, the next-youngest person on the committee was twenty years her senior, and other members of the heavily male finance committee made sexist remarks on numerous occasions. “They would say things like ‘you’re just a girl’…They would make comments about my hair, my clothes, my age.”

Shaffir realized, however, that she needed to learn from older committee members before she could inspire real change. After spending time analyzing the budget, Shaffir said she realized that the budget passed in the Knesset was “fake.”

“The finance committee changed it entirely,” she said. “There were lots of cuts to social security and education. 17 billion shekels changed. It was a habit that continued for decades because it served politicians.”

“I created an army of transparency,” she said. “It took a few weeks to expose the corruption, but we found money going into NGOs that funded the party running the committee, and money going to organizations that didn’t even exist.”

Shaffir believed that the only way to end the corruption was to open it up to the public. It took another year to make the budget transparent after a Supreme Court appeal. In 2015, Shaffir started and chaired a semi-permanent Transparency Committee in parliament, and extended it to the 35-country Organisation for Economic Co-operation and Development (OECD).

Shaffir said that her next objective is to rebuild the progressive movement.

“Most Israelis want a two-state solution, religious freedom and progressive values,” she said. “The only political power that can achieve this solution is the progressive movement.”

Shaffir added, “The Labor Party should be leading the progressive camp, but it has been destroying itself.”

She criticized young progressives for supporting divestment boycotts in support of Palestine. “This only moves people further to the right. It makes Israelis feel like the world is against them and makes progressives look weaker.”

During the brief question-and-answer session after Shaffir’s talk, she discussed how young, progressive non-Israeli Jews can help the movement by visiting Israel and making use of social media to address activist causes.

“Before I give talks at schools, I am always told not to talk about politics,” she said. “Schools are afraid of politics, and this fear of politics is harming politics. We don’t want to brainwash kids, of course, but there’s no reason why they shouldn’t know how to write a petition, how to create an organization, or how to mobilize movements.”