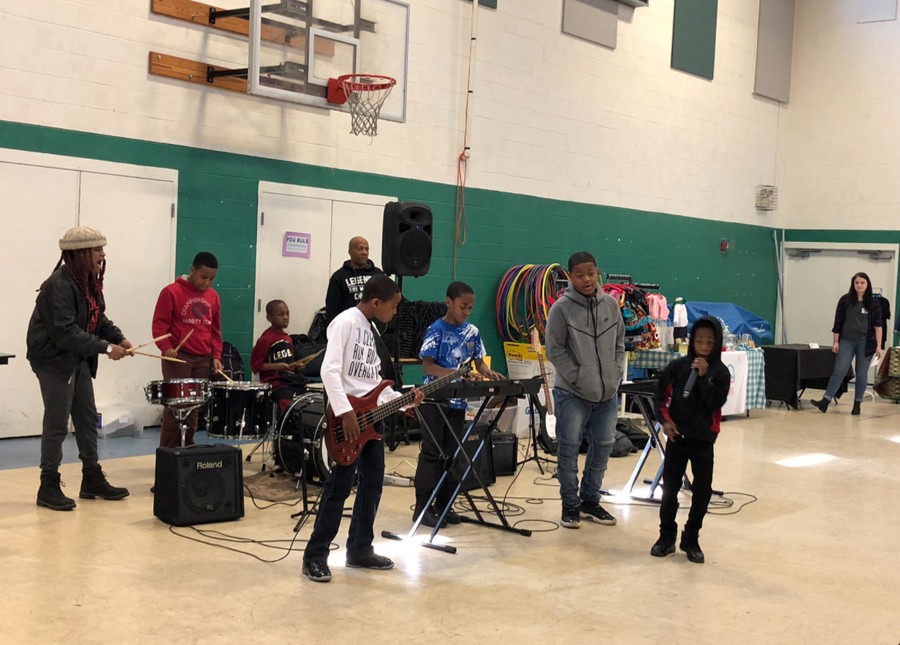 “Every year it gets bigger and better,” said Monique Cook-Bey, Chief Program Officer of Chicago Youth Programs (CYP), about the third annual Washington Park Arts Festival that took place last Saturday. A collaboration between CYP, Student Government, the University Community Service Center, and several other university and Washington Park community organizations, the annual festival once again provided local South Side entrepreneurs, residents, and University of Chicago students with a place to connect and showcase their artistic skills. The festival was held in the building of Chicago Youth Programs, with a central performance space encircled by booths of local retail vendors.

Throughout the afternoon, vendors such as Agortles Dessert Shop and Jennifer’s Edibles provided free food for the event while schoolkids ran around the space, sitting down periodically to watch performances.

Performances ranged from a cappella to acrobatics. Particularly memorable was a play put on by a local theatre group run by Sydney Chatman, a performing arts teacher at University of Chicago’s Charter School and founder of the Tofu Chitlin' Circuit. The group consisted of seven girls ranging from six to 12 years old. Dressed in black jumpsuits, gold light-up sneakers, and aviator hats, they acted out a 20-minute segment from their hour-long play, Black Girls (Can) Fly, written by Chatman. The play told the story of Bessie May, a 10-year-old living in Chicago, unable to sleep at night due to the violence in her neighborhood. Among lighthearted moments of dancing and a choreographed fight, the girls posed serious questions.

“Who takes the blame for the violence in this city?” they asked. “Why is this happening?” The solemnity of the statement, coupled with the performers’ precocity, made this call for change all the more thought-provoking.

University of Chicago performance groups participated in the festival as well, including Rhythm and Jews, Le Vorris and Vox Circus, and The Ransom Notes, who gave complex renditions of familiar pop songs such as Britney Spears’s “Oops!... I Did It Again.” Elyse Lynch delivered particularly rousing vocals in the group’s rendition of Dua Lipa’s Last Dance, and impressive high notes were also hit by first-year Noah Friedlander. Dance performances included the University’s student groups Chicago Swing Dance Society, whose dancers gave a refreshing performance to Jason Mraz’s “I’m Yours”; Chicago Ballet; and Tap That!, a group that was singled out as a firm favorite by one little boy (who later asked me if I liked pizza).

The Washington Park Arts Festival enables community members to pool their resources together to create a special day for young schoolchildren and gives local companies and entrepreneurs the chance to spread their message. The response has been significant, and expansion is continuous. Samaiyan Muhammad Wright, the founder of Pink Lemonade Children’s Books, exhibited her handcrafted comic books and spoke about the Book and Brunch program that she is planning for the children on dialysis at Rush University Medical Center. Other organizations included a gluten-free bakery company Better Belly, and the free after-school program the KLEO Center, which provides children with places to spend time after school and in the summertime.

“The whole point is to get more students interacting with South Side residents,” said Cook-Bey. “People are sometimes afraid,” she continued. In the same vein, she spoke about her long-term goal to see the Washington Park Arts Festival held on the University of Chicago campus.

“My dream would be for the University of Chicago to do something like this,” she said.

Cook-Bey’s hope is certainly a step in the right direction. Bringing the Washington Park Arts Festival to the University’s campus would create the valuable opportunity for students, from K-12 to college, to interact with and learn from each other, shaping and strengthening the University of Chicago’s interaction with the South Side in a positive, sustainable, and necessary way.

The article has been updated to include the event's co-sponsors and provide a fuller introduction of its collaborators.