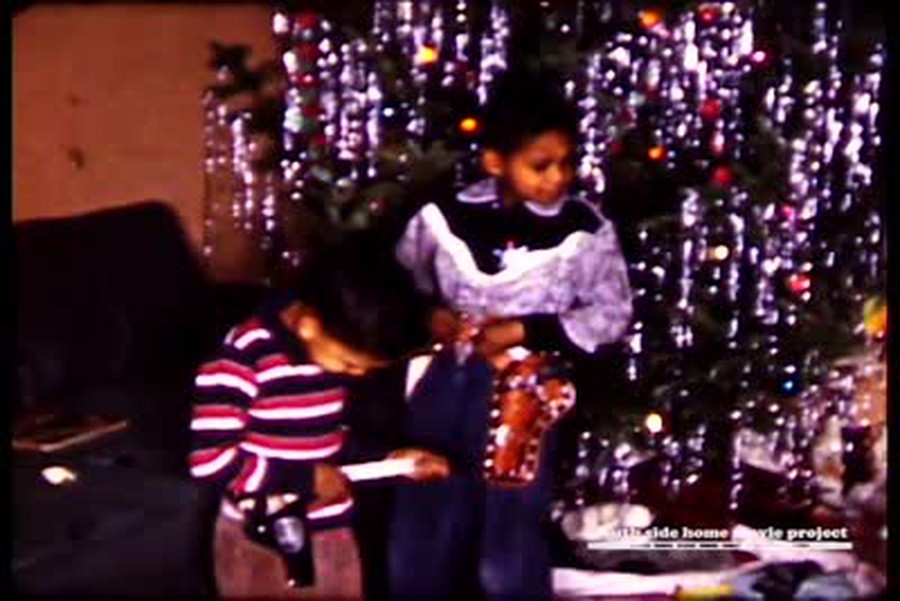 The Christmas season at the home of Dr. George Reed, a physicist at Argonne National Laboratories whose family lived on Calumet Avenue in Woodlawn. This still comes from a film shot in the 1950s.

A new digital archive, and a program of frequent public screenings and exhibitions, has been created for the South Side Home Movie Project, which was started in 2005 by University professor Jacqueline Stewart. The Project archives, digitizes, and publicly screens the home movies of South Side families produced from 1929–1982 on 16 mm, 8 mm, and Super 8 films.

According to Stewart, by collecting and screening the experiences and minutiae of the films’ predominantly Black South Side families, the Project aims to challenge the negative images and stereotypes of the South Side that pervade American media.

Stewart began the project after she was unable to find early Black films for her research, according to Candace Ming, the project’s archivist. “She knew they had to exist, and she likes to say she was nosy,” Ming said. “Ordinary Black families had to have films that documented their lives, and of course she was right.”

When Stewart began collecting the films, the families involved were often skeptical of the films’ value, believing that they were so personal that they would be boring to outside viewers.

However, audience reactions to public screenings of the home movies proved otherwise. According to Stewart, at one public viewing, a white family from Bridgeport and a Black family from neighboring Bronzeville began engaging in conversation after recognizing having owned the same sofa as the one depicted in the film.

Ming also described viewers recognizing streets, or even people, from the films. She added that the films’ universal themes, such as parental affection, allow the films to transcend divisions of race and class. “After watching all these movies, it’s like, ‘Hey, I’m part of your family now,’” Ming said.

In addition, in depicting the private lives of South Side residents, the films shed new light on historical events by presenting them from the perspectives of many different individuals. In an interview with WBEZ, Ming described one of her favorite film reels, a longer 20-minute movie that documents historical events such as the Bud Billiken parade, the largest African American parade in the nation, and the 1963 school boycott against the segregationist policies of the Chicago Public Schools. One of the films also includes the memorial march for Medgar Evers and features his widow Myrlie Evers-Williams.

“People really respond to this footage...because it’s showing such a different perspective of the South Side,” Ming said of the films’ effects on their contributors, who are primarily South Side residents. She added that the films have proven especially powerful for children and teenagers, who are constantly inundated with negative depictions of their communities in the media.

In 2017, teenage South Siders responded to the home movies by making their own films. The project, entitled “Breaking Barriers,” used cell phone footage and clips from the South Side Home Movie project to compare common portrayals of the South Side with the teenagers’ own experiences.

The Home Movie project also provides families or individuals with the opportunity to see their home movies, very often for the first time. According to Ming, many people who brought in their family film reels had thrown out the equipment to view the films and brought the movies to Stewart’s project in order to be able to see what was on them.

Ming added that Stewart believes in allowing viewers to see the original footage played on the original equipment, which is at odds with traditional archiving principles of avoiding screening unique prints to assure preservation of the film. “Working with Jackie has changed…how I view archiving,” she said.

The project is expanding its collection by the day, Ming said. Stewart professed her desire to obtain resources that would allow videotaped movies to be added to the collection. Videotaping was an affordable option and many of the family movies were captured on tape, but digitizing these films is an expensive process.

“The camcorder…is cheaper, and opens up a broader range of family demographics,” Stewart said.