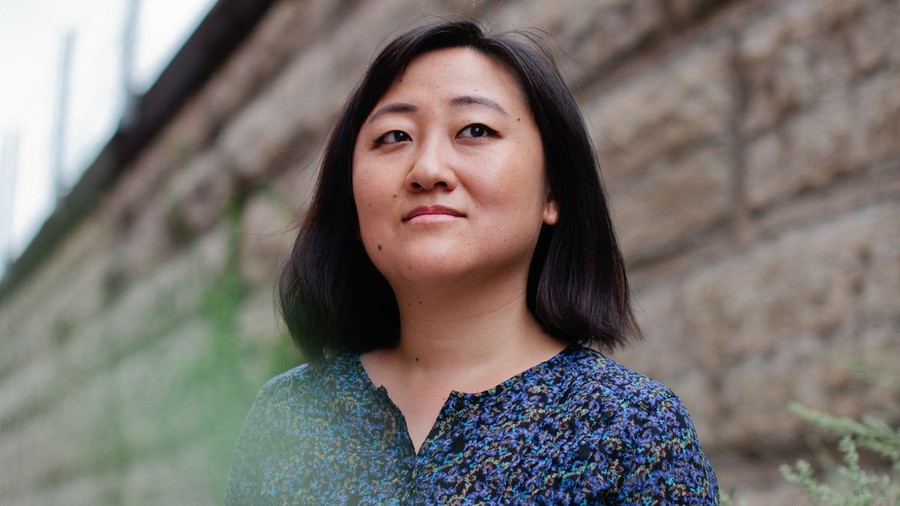 Uchicago professor Ling Ma spoke about her book "Severance" at the Seminary Co-op.

On a cold, snowy January evening, a crowd packed into the Seminary Co-Op to hear UChicago professor Ling Ma read from her Kirkus Prize–winning “post-apocalyptic office novel,” Severance. The store was standing-room only, seats having filled some 20 minutes before the scheduled start time, and yet no one seemed to mind. Ma is a beloved assistant professor of Practice in the Arts, and her soaring success (Severance was named a New York Times notable book of 2018) is a point of pride for the University’s fledgling creative writing department.

Casually, almost shyly, Ma said she would keep the reading “short and painless,” opting for two brief excerpts from the beginning of the novel: the first, a part of the prologue in which a collective voice turns to the internet to survive the apocalypse; the second, from the novel’s opening chapter, featuring the protagonist, Candace Chen, at work in Bible production just before the end of the world. The reading was enthralling, but still comfortable, even informal—Ma paused her reading to respond to one student’s particularly enthusiastic laugh with a matter-of-fact “Yeah.”

Ma closed the reading with a reflection on how Severance had come to be, and then responded to audience questions. It was strange to be reading the book again, she said, because she had begun it in 2012 while working a management job, frustrated by office power dynamics and ceaseless layoffs. Her goal with the work, as with most fiction, was to find what she “personally [wanted] to take down,” and then cause its collapse—for Severance, the target was capitalism. Ma drew from her own experience in book production to build Candace’s world, and admitted to choosing Bible manufacturing because she found it to be “the strangest.” As she later elaborated, the Bible industry is perhaps the epitome of consumerism: Bibles are everywhere, and yet they are continually repackaged and republished and repurchased. Very few people ever really need a new edition of the Bible, and so it simply becomes an empty object. In addition, Ma appreciated the irony of their mass production in China, a Communist country without an official religion.

As Ma answered questions, she addressed her students by name, frequently referring to their class discussions. A particular emphasis carried over from her workshops was the use of character voice. The strength and specificity of her narrative voice is perhaps the key to the work’s success. As Ma explained, it banks “on Candace Chen’s voice, because if you buy into it, it is all plausible, even the zombie apocalypse and global capitalism.” She cited Linda Manz’s voiceover work in the film Days of Heaven as a major influence on her narrator. Largely improvised, she “sounded natural and poetic, like a person.” What if Terrence Malick directed a zombie B-movie? Ma asked herself. What would the voiceover sound like? And so, although Severance began life as a short story in the collective “we” of the prologue, Candace’s voice emerged as strong enough to sustain an entire novel.

Other questions touched on the origin of Ma’s zombies (she admitted to binge-watching The Walking Dead and deciding she could do it better by taking a “gentle” spin on the trope), her “loving destruction” of New York City, and the “office” part of an “apocalypse office novel.” She would never have written purely about zombies, but instead wanted a “meditation on work” and repetitive labor in China.

Finally, she concluded as only a well-honed writer and professor could, with her take on the writing process. Ma wrote Severance without plotting in advance, instead expanding its world with opportunities arising along the way. Her advice to fledgling writers was to “surround yourself with things you’re interested in” that inspire you and allow them to play a part in the creation of art. The subconscious is stronger often than the conscious, she argued, and your brain will put the pieces together somehow.

As the evening wrapped up, attendees lined up to have Ma sign copies of her books. She chatted with her students and mentioned how she had written exactly one article for The Maroon during her time as a student. Ultimately, Ma became less a celebrity guest than a member of the UChicago community, simply sharing her own (wildly successful) work among friends and students.