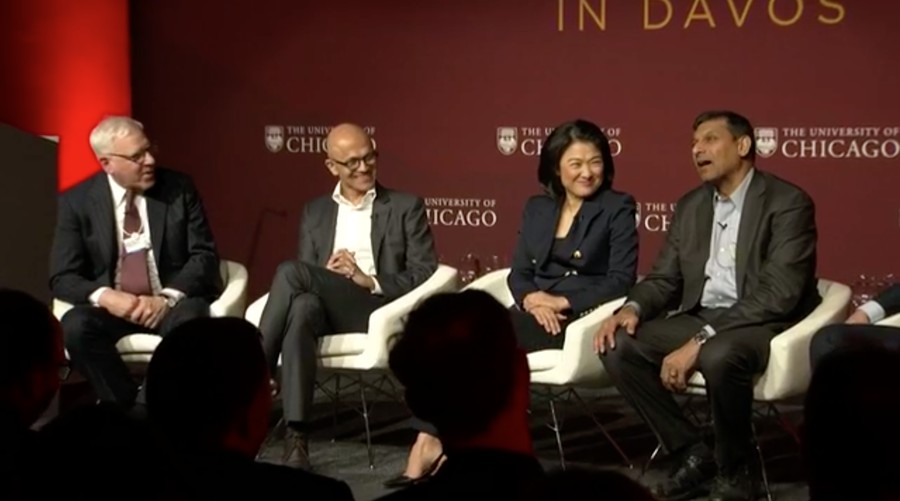 The University hosted an event in Davos, Switzerland, on Tuesday, concurrent, but not affiliated, with the World Economic Forum. The event featured a panel discussion on leadership and maintaining an organization’s values in an evolving environment.

The panel was moderated by UChicago Trustee David Rubenstein (J.D. ’73) and featured President Robert Zimmer, Trustee Satya Nadella (M.B.A. ’97), also the CEO of Microsoft, Xin Zhang, cofounder and CEO of the Chinese property developer SOHO China, and Raghuram Rajan, a professor of finance at Booth. The University hosts this event annually at the same time as and in the vicinity of the World Economic Forum, although the two are not officially related.

Nadella spoke on reconnecting Microsoft with its original purpose of creating tools for developers—a goal which he claimed is no less relevant today than at Microsoft's founding in 1975. “We needed to get back and focus on what we do well, not be envious of others’ success,” Nadella said.

Nadella, who was also in Davos for the World Economic Forum this week, joined Apple CEO Tim Cook for a dinner with Jair Bolsonaro, the newly-inaugurated President of Brazil, who has surrounded himself with a number of UChicago alumni.

Tim Cook and Satya Nadella having dinner in Davos with Jair Bolsonaro, the far-right president of Brazil pic.twitter.com/wQgn9b7SuO

Rajan, who before being named professor at Booth was the Chief Economist at the International Monetary Fund (IMF) and the Governor of the Reserve Bank of India, remarked on training and educating incoming bankers, stating, “The young people in every country are the hope for the country because they really want to learn.”

Zimmer, speaking on the values he associates with the University of Chicago, beat a familiar drum by saying that the University has “an absolutely fundamental set of enduring values” which includes “intellectual challenge, rigorous inquiry, and the free expression that goes along with it.” He claimed that these values inform his leadership as president.

When asked whether his legacy as the University’s president would focus too much on free expression, Zimmer demurred, saying, “The real question is, what have you actually left behind?”