Checking in on the New Business Economics Track

Last year, the College’s department of economics proposed a new business major for undergraduates, which was rapidly met with resistance from the student body and other departments on campus. It is now 2019, and the business major did not, in fact, come to fruition. In the wake of the commotion, however, something else did. Starting this year, prospective economics majors in the College can opt to take an alternative to the traditional economics track: the business economics track.

Last fall, The Chicago Maroon conducted a survey of the student body regarding the new business economics track in the College, receiving responses from 179 undergraduate students. Results from the survey suggest that opinions on the track remain divided.

For decades, the College has been known for its philosophy and values on education, embodied in the Core and lack of emphasis on pre-professional programs and majors. When announced, the business major raised concerns that these values were changing, and it seems as though these concerns have, to a certain extent, remained.

Almost 50 percent of survey respondents disagreed with the statement that the new business economics track is in line with the values of the College, while 31 percent agreed. However, 64 percent of respondents agreed or strongly agreed that the College should re-evaluate its stance on pre-professional programs.

The stance of the Economics department as a whole seems to parallel that of the majority of respondents. Faculty members deny that the new Business Economics track threatens the College’s historic values and consider the track as a way of widening access to the major for less mathematically-inclined students.

The Business Economics track differs from the traditional Economics major in its substitution of math classes required in the traditional Economics major for Business courses at the Booth School of Business. Almost every interviewed faculty member in the Economics department made it clear that the track itself is not pre-professional and was never intended to be. The track, they said, should not be thought of as a platform or shortcut to the job market, but rather as a method to better help students interested in Economics with different inclinations toward learning.

Many students question the major’s rigor. In the survey distributed by The Maroon, 77 percent of respondents said that the Business Economics track is less rigorous than the traditional Economics track, while 48 percent thought the track reduced the value of the Economics degree as a whole.

Robert Shimer, Chair of the Economics Department, refuted the idea that the Business Economics track was less rigorous than the traditional track. “There’s a lot of different notions of rigor. The Business Econ major that we want is not one where people are going to say that this is the easy track— they’re both going to be hard in their own ways”, Shimer said. 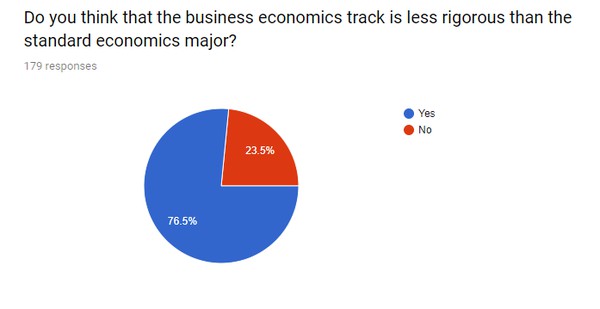 More than three-quarters of the respondents stated that the business economics track was less rigorous than the traditional track.

The Economics major now has three tracks which can be navigated in a singular direction. A student in the data science track, an option added this year, can easily move into the traditional Economics track or the Business track. However, the opposite would prove difficult if not impossible given the mathematical course requirements. Furthermore, this discrepancy between tracks seems to have influenced students— 56 percent of respondents believe the Business track should be its own major. 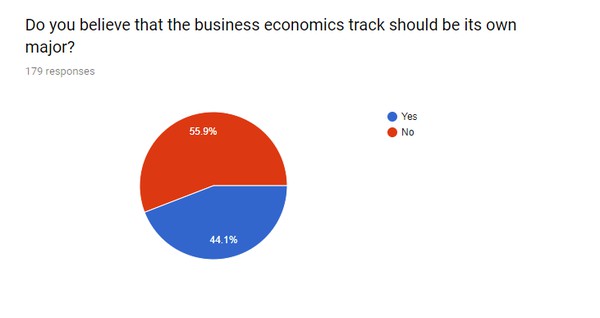 More than half the students believe that UChicago should not have a separate business major.

The influence the Business Economics track will have on other departments has yet to be seen. Ultimately, student and faculty involvement alike will determine the future educational landscape at the College.