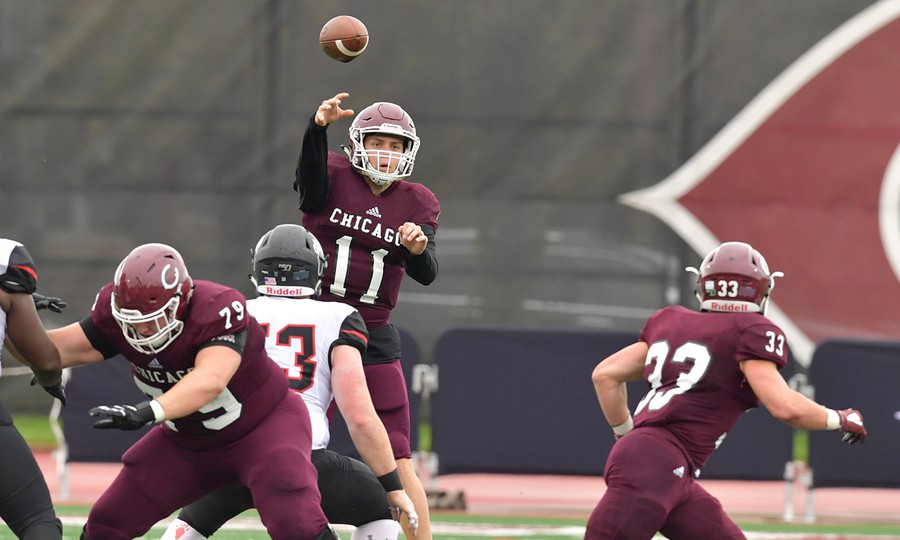 The University of Chicago men’s football team found themselves in familiar territory last Saturday, shutting out the Beloit College Buccaneers 48-0 and bringing their record to 2-2. Beloit dropped to 0-4 after the contest. The Maroons have beaten Beloit three straight times by a combined score of 166-12.

The Maroons accumulated an impressive stat sheet, while virtually only playing one half of football. Lighting struck raptlystarting at halftime, and both teams agreed to play two one-minute quarters in the second half, each just taking a knee to bring the game to a conclusion. The Maroons only held the ball fora little over 14 minutes, but amassed 441 yards of total offense. The offense was led by senior quarterback Marco Cobian, who went an impressive 17-19 for 321 yards and threetouchdowns.

Cobian spoke of the performance, saying, “Our emphasis as a team, but more specifically, as an offense, going into this week was to start fast and uphold our standards as an offense. We knew going into this week that we could have an opportunity to get a lot of guys their first substantial college football playing time if we handled our business. It’s unfortunate that we couldn’t play as many guys as we wanted due to weather shortening the game, but overall it was a good team win and we’re all happy to be going in the right direction.”

The offense was also led by another third-year, running back Mike Martinson. While weather hampered his stat sheet, Martinson ran for two scores on five carries, averaging 8.4 yards a carry. Fourth-year Dante Nepa joined his fellow classmates in leading the offense, hauling in four receptions for 73 yards and a pair of touchdowns.

Defensively, the Maroons did not come up with any takeaways, but they were able to hold Beloit to a meager four first downs and 65 yards of total offense. Fourth-year linebacker Henry Winebrake led the way with sixtotal tackles, one for loss. Winebrake was followed closely by third-year defensive lineman Jackson Ross, who amassed five total tackles on the day.

The Maroons will now look towards this Saturday’s upcoming home contest with the Knox College Prairie Fire, who will also enter the contest at 2-2. The Prairie Fire beat Beloit two weeks ago by a score of 45-21, but are coming off a lopsided 28-3 road loss to Lake Forest College.

The Maroons beat Lake Forest two weeks ago 27-10. UChicago will kick off its homecoming game Saturday 12 at 2p.m. at Stagg Field.