Flat Caps, Not Percentages: We Need a Sensible Honors System

The University may be justified in thinking the old Dean’s List was too lax. But the new system will spark confusion and unnecessary competition. 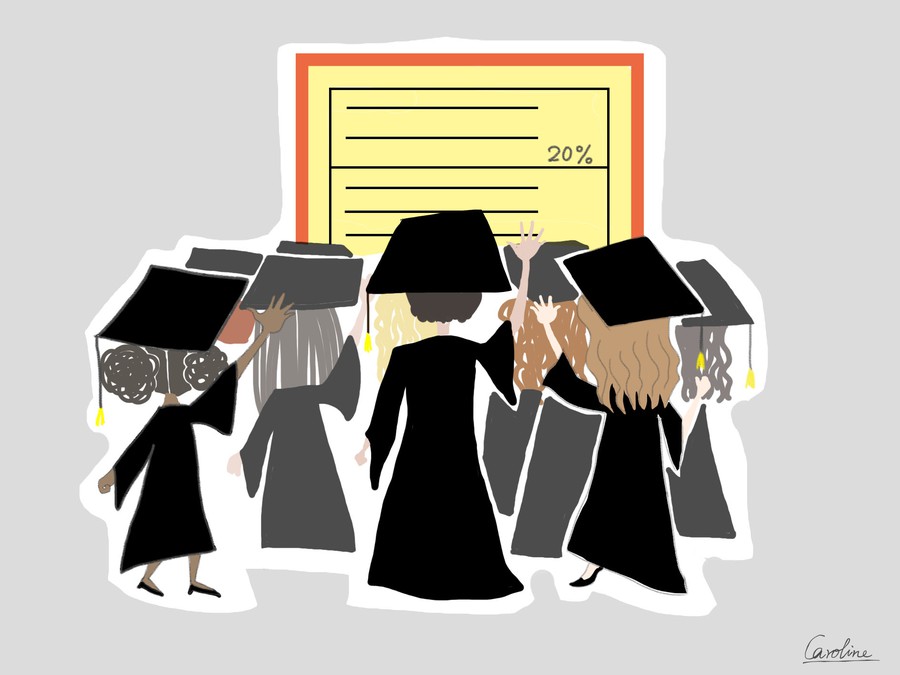 With little fanfare, the administration recently made hefty edits to the honors section of the College Catalog, including a tightened Dean’s List, newly instituted Latin honors, and a slate of shiny new academic awards. The most significant change, affecting the largest number of students, is the new Dean’s List cutoff. Starting this June, the year-end accolade—formerly awarded to any College student with a GPA of 3.25 for courses taken over the previous year—will be restricted to the top 20 percent of students based on grades earned that year.

There’s good reason to be alarmed by the unannounced Dean’s List changes. In 2018, a whopping 74.8 percent of the graduating College class earned General Honors, a label phased out under the new system but formerly given to students with cumulative GPAs of 3.25 or above.

If we assume that the percentage of fourth-years with overall GPAs over 3.25 is roughly equal to the proportion of students earning an equivalent GPA in a given year, then under the previous system, around three-quarters of students were on the Dean’s List each June. This would mean that over half of the student body who could formerly expect a congratulatory email from Dean Boyer at the start of summer will now be excluded from the list.

(A note: To get the 74.8 percent figure, we looked in the graduation program for 2018. There, 1,177 of the 1,573 total students in the Class of 2018 appear under “General Honors.” A corresponding General Honors list does not appear in the 2019 graduation program—a signal of the distinction’s pending demise, perhaps?)

It’s almost certainly true that when the Dean’s List distinction was first instituted, the proportion of students who received it was much lower. In 1965, the average GPA at UChicago was just 2.50, according to research by Duke University professor Stuart Rojstaczer. Similarly, in 1971, only 31 percent of graduating students earned General Honors. By 1997, that figure had risen to around half of the graduating class.

If our estimate is right that the Dean’s List has grown to include around three-quarters of students each year, the University probably is justified in thinking that the 3.25 cutoff was too lenient. Our reservations with the new Dean’s List don’t stem from the College’s efforts to make it more selective. Ultimately, these accolades—duly noted on resumes and graduate school applications—serve to shape outside institutions’ perceptions of the University. We agree that it's important for academic honors at UChicago to have weight in the real world, and that the current cutoff may be harming the respect with which the Dean's List is viewed.

But there is a fairer way to make the Dean’s List more selective: simply raising the GPA cutoff, instead of tethering honors to an arbitrary 20 percent restriction. As several students have argued, the percentage cap will very likely perpetuate cutthroat competition as students duel for the top GPA quintile.

Under the old system, the Dean’s List was useful not just as a pat on the back, but also because it served as a standard for what administration-sanctioned academic success here looked like. If in light of grade inflation in recent years, Dean Boyer’s office believes this measure should be higher than 3.25, then that is a perfectly valid assessment. But the 20 percent cap removes a tangible goal to which students can strive. It will only perpetuate confusion and anxiety among students, who—having no idea what GPA should be achieved—must now grasp at perfection to ensure inclusion on the Dean’s List.

Those best served by the choice to base the Dean’s List on percentile ranking, rather than a higher GPA cutoff? The administration. With this switch, they've neatly avoided publicizing the extent of recent grade inflation at UChicago.

Even as the University has trimmed the percentage of students receiving awards, the types of showy labels students can display on their resumés have proliferated.

We’re also supportive of the new Harper Awards’ intent, which is to spotlight intellectual curiosity and subject-specific work by recognizing “the deeply engaged, stellar student, independent of the grade they receive” in a given class.

However, with the dubious Robert Maynard Hutchins Scholars distinction, the University again misfires. The brand-new award will be given to the top 10 percent of second-years by cumulative GPA. According to the College Catalog, the award seeks “to honor students who have performed exceptionally in their core courses and introductory courses for their major.”

The criteria for this award are enormously misguided. For one, unlike Latin honors, the award isn’t distributed across declared majors (disadvantaging students whose departments require notoriously tough weed-out classes, like Organic Chemistry, the Economics 200s series, or the Computer Science 150s). Second, handing out accolades for straight-A’s in primarily Core classes undermines the very goal of the Core Curriculum itself.

The Core was designed to cultivate in underclassmen the ability to read critically, write clearly, and think systematically, and prepare them for college-level work—regardless of background. Commending perfection in the Core, rather than improvement over time, will almost certainly favor students from elite high schools where proofs and ancient philosophy are taught. Alternatively, it will reward students who neglect the reading-intensive Hum and Sosc sequences, or rigorous experiences like Honors Calculus, for more lightweight options.

Several students have already argued that UChicago should have consulted (or at the very least, informed!) the student body before instituting such significant academic changes. Clearly, the tightened Dean’s List and the new breadth of honors offered reflect the administration’s renewed commitment to eliteness and accolades—to identifying, lauding, and tracking students who excel academically.

But these changes must make sense; they should be reformed to discourage needless gaming of the system, and instead promote genuine intellectual engagement that does not breed unhealthy competition. For academic honors that are actually worthwhile, UChicago should go back to the drawing board. The administration must overcome its pride surrounding grade inflation, and put College students’ well-being ahead of institutional ego.