The vote is nonbinding, meaning that City Council will not necessarily pass it or consider it on the floor.

By Elaine Chen    and Miles Burton 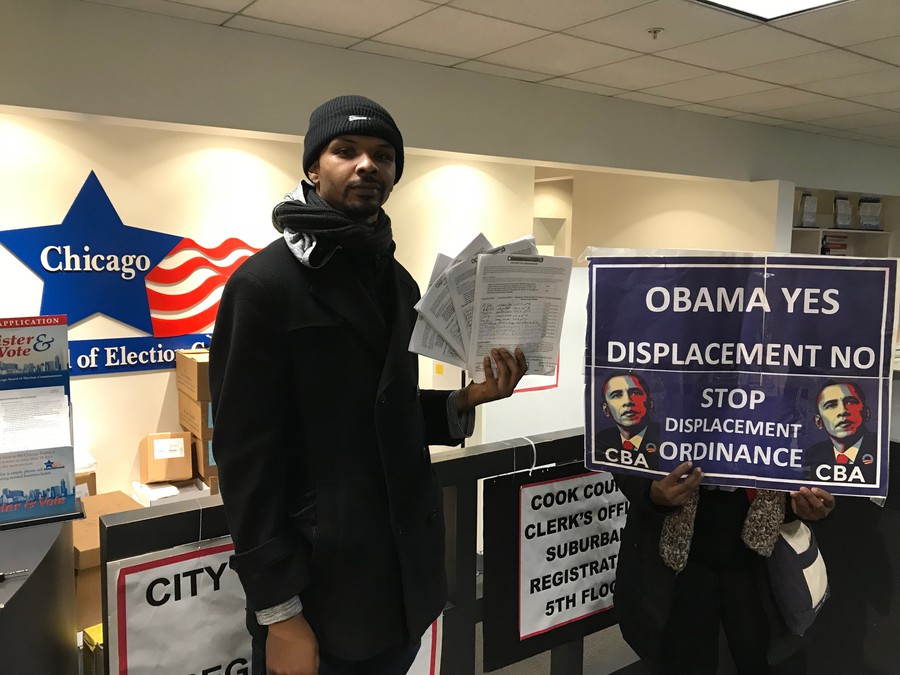 Devondrick Jeffers, an activist with the CBA Coalition, submits the petition for the ordinance.

In a nonbinding referendum, voters in wards in and around the forthcoming Obama Presidential Center (OPC) in Jackson Park voted overwhelmingly in support of a Community Benefits Agreement (CBA) ordinance for the OPC.

A CBA ordinance would obligate the OPC’s developers, including the City of Chicago, Obama Foundation, and the University of Chicago, to guarantee certain benefits to residents near the OPC, including affordable housing, a property tax freeze, and funding for jobs in the area.

About 88 percent of voters in the fifth precinct of the Fifth Ward and from 80 percent and 90 percent in the first, 22nd, and 23rd precincts in the 20th Ward voted in support of the referendum.

The CBA Coalition submitted a petition in November to get the referendum on the ballot. The referendum is nonbinding, meaning that even though voters have voted in support of it, City Council is not legally required to pass the ordinance or even consider it on the floor. However, if aldermen of the wards in and around the OPC support a CBA ordinance, they could bring the ordinance to the floor.

Among the aldermanic candidates to face off in runoff elections for the Fifth and 20th Wards, one of them has not expressed support for a CBA ordinance.

Leslie Hairston, incumbent alderman of the Fifth Ward, who narrowly failed to avoid a runoff election with 48 percent of the vote, has consistently refused to support a CBA ordinance, saying that she has instead developed a neighborhood stabilization plan. Community organizer William Calloway, who will face Hairston in the runoff, has expressed support for a CBA ordinance.

Jeanette Taylor and Nicole Johnson, the two candidates to face off in a runoff for 20th Ward alderman, have also strongly supported a CBA ordinance.

At an Obama Foundation town hall last February, former president Barack Obama opposed a CBA, saying any potential agreement would fail to include all community members.

“If we sign with one, two, or five organizations, they’re not representing everybody on the South Side. Next thing you know, you’ve got 40 or 50 organizations—all wanting to be decision makers. We're not going to do that," he said.

The Obama Foundation currently plans to start construction on the OPC this year, but the Foundation is facing several hurdles before it breaks ground. The environmental advocacy group Protect Our Parks has filed a lawsuit against the City and Chicago Park District, claiming that the OPC’s construction on Jackson Park is an “illegal grab” of public land. Construction of the OPC also faces a federal review process because Jackson Park is included on the National Register of Historic Places.

The article has been corrected to say that William Calloway, not Gabriel Piemonte, will face Leslie Hairston in a runoff election for Fifth Ward alderman.

The Coalition filed a petition for a referendum on the ordinance on Monday.