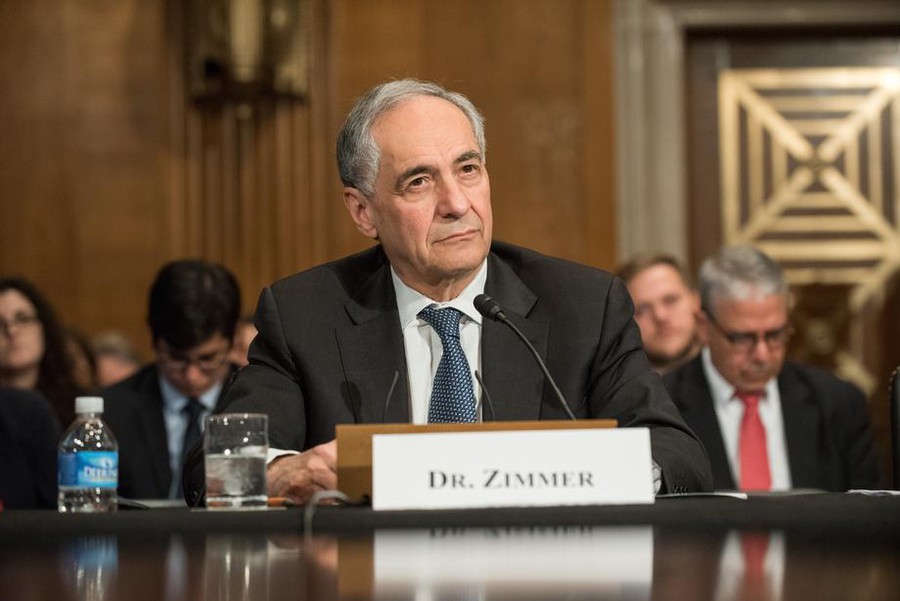 Zimmer testified before the Senate in 2017 opposing federal intervention in campus free speech.

President Robert Zimmer sent an e-mail to the University community on Monday morning expressing his opposition to President Donald Trump's suggested executive order that would require universities to "support" free speech or face cutbacks in research funding. The full statement is below:

I am writing in light of news about a potential Executive Order concerning free expression on campuses.

As president of the University of Chicago, I have spoken forcefully and frequently about the importance of free expression, open discourse, and ongoing intellectual challenge as a necessary foundation for a truly empowering education and a research environment that fosters creativity and originality. Students, particularly, need and deserve an opportunity to develop the intellectual skills and habits of mind derived from such an education—to confront the complex challenges they will face in their futures, to give them the capacity their ambition should demand, and to reflect the courage of which they are capable. Failing to provide an education of deep intellectual challenge supported by an environment of free expression is selling students short and would fail to live up to our highest aspirations as educators.

The University of Chicago has embraced this perspective throughout its history, and the statement by the Faculty Committee on Free Expression articulated this long-held position in what is now widely known as the Chicago Principles. These principles have been adopted by over 50 higher education institutions since they were articulated in January 2015. However, the difficulty many institutions of higher education have in cultivating an environment of free expression on their respective campuses remains a serious challenge.

The question of whether this problem should be addressed through additional Federal legislation or executive action has been raised in multiple situations in recent years. In 2017, I testified before the U.S. Senate Committee on Health, Education, Labor, and Pensions, chaired by Senator Lamar Alexander. Senator Alexander asked me at that time whether I thought Congress should address free expression on campus through federal legislation. I replied unequivocally that I was opposed to any such federal legislation. The question of federal intervention in this arena arises again today, not with Congress, but with the Executive Branch. As was my position with respect to Congress, I believe that any action by the Executive Branch that interferes with the ability of higher education institutions to address this problem themselves is misguided and in fact sets a very problematic precedent.

There are two related features of potential Federal engagement on this issue that would threaten the mission of institutions of higher education. They would do so by creating the specter of less rather than more free expression, and by deeply chilling the environment for discourse and intellectual challenge. The first feature is the precedent of the Federal government establishing its own standing to interfere in the issue of speech on campuses. This opens the door to any number of troubling policies over time that the Federal government, whatever the political party involved, might adopt on such matters. It makes the government, with all its power and authority, a party to defining the very nature of discussion on campus. The second feature is the inevitable establishment of a bureaucracy to enforce any governmental position. A committee in Washington passing judgment on the speech policies and activities of educational institutions, judgments that may change according to who is in power and what policies they wish to promulgate, would be a profound threat to open discourse on campus. In fact, it would reproduce in Washington exactly the type of on-campus “speech committee” that would be a natural and dangerous consequence of the position taken by many advocating for the limitation of discourse on campuses.

Therefore, rather than improving the situation, further legislative or executive Federal action has the potential to reinforce and expand the difficulties regarding education and free expression that we are confronting now. It would be a grave error for the short and the long run.

The President said he would sign an executive order enshrining the threat.