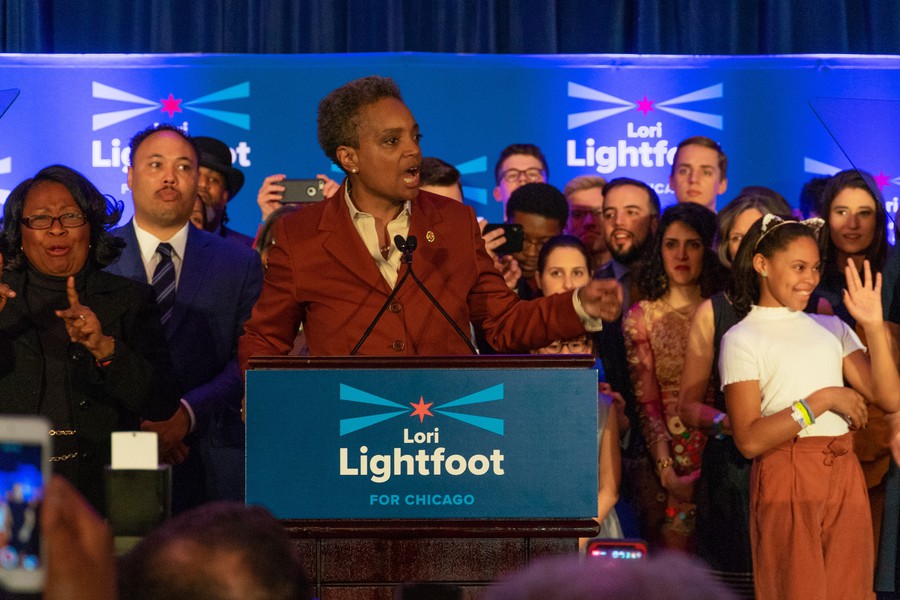 Lightfoot speaks at her campaign party in South Loop.

Lori Lightfoot (J.D. ’89) won the mayoral race over Toni Preckwinkle (A.B. ’69, A.M. ’77) by a margin of nearly 50 percentage points on Tuesday night, closing off a historic runoff between two Black women, both of whom are UChicago alumnae.

In addition to being the first UChicago alumna and Black woman as mayor, Lightfoot will also be Chicago’s first openly gay mayor.

With 97 percent of precincts reported on Tuesday night, Lightfoot had 74 percent of the vote and Preckwinkle had 26 percent.

Lightfoot, originally seen as a long shot in the race, increasingly drew traction shortly before the February general elections. In her campaign, she appealed to her status as an outsider unbound by the complex relationships of Chicago politics.

“In this election, Toni and I were competitors,” Lightfoot said. “Now that it’s over, I know we will work together for the city we love.”

“When we started this journey 11 months ago, nobody gave us much of a chance,” Lightfoot said at her campaign party in South Loop. “We had faith—an abiding faith in this city, in its people…. We let our faith overcome our fears.”

Preckwinkle told the crowd at her campaign party in Hyde Park, “While I may be disappointed, I am not disheartened.” 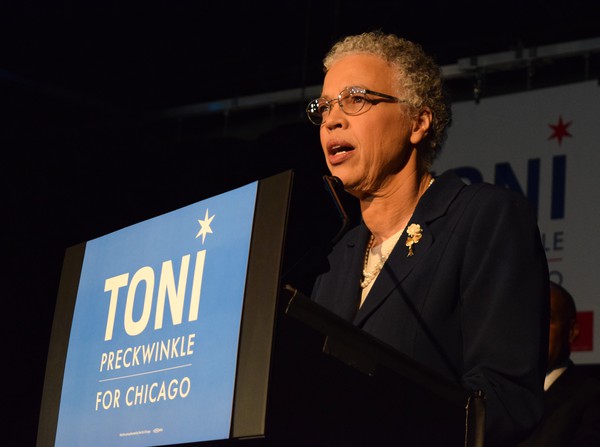 Preckwinkle speaking at her campaign party in Hyde Park.

Tuesday’s runoff election, the second mayoral runoff in Chicago history, had dramatically low turnout. Chicago Board of Election Commissioners spokesman Jim Allen predicts total voter turnout to be near 33 percent, potentially a record low for a Chicago mayoral race. In 2007, voter turnout reached a historic low of 33.08 percent to re-elect Richard M. Daley for a sixth term as mayor.

Many Preckwinkle supporters voiced concern over the low turnout.

“I am disappointed in Chicago for the turnout because it is a historical moment,” Preckwinkle supporter Deborah Lane said. “I hope that people understand and get more involved by understanding that politics is not only about the leadership, but also about the constituents.”

Lightfoot, former chair of the Chicago Police Accountability Board, was originally seen as a long shot in the race. She ran against candidates with more extensive political experience such as Preckwinkle, Cook County Board President and Fourth Ward Democratic Committeewoman, and candidates with more political connections such as Bill Daley, brother of former mayor Richard M. Daley and son of former mayor Richard J. Daley.

Lightfoot graduated from the Law School in 1989. While she was there, she served as student body president and worked to ban a law firm whose recruiter had made racist and sexist remarks to a Black female student. After law school, she served various positions in the private and public sector, including federal prosecutor, president of the city’s police board, and partner at Mayer Brown LLP.

Critics have noted that Lightfoot has never held elected office before. Leading up to the runoffs, Preckwinkle emphasized her extensive experience serving as an elected official. Before her terms as Cook County Board president starting in 2010, Preckwinkle served as Fourth Ward alderman for five terms.

“It’s easy to talk about change. It’s hard to actually do it. And that’s been my experience—being a change-maker, a change agent, transforming institutions and communities,” Preckwinkle said while campaigning.

Preckwinkle has also implicitly criticized Lightfoot’s lack of experience, claiming that mayor is “not an entry level position.”  Lightfoot refuted criticisms that she would not be prepared to serve as mayor, claiming that her wide experience adapting to different jobs makes her qualified. 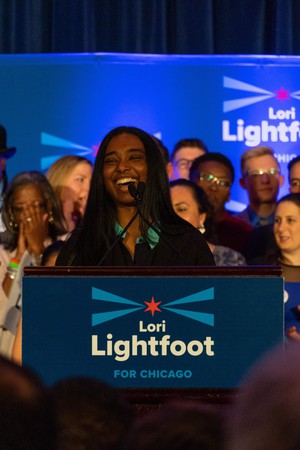 “If Lori were to win mayor of Chicago, she would be the first openly gay and first black woman,” Lewis said. “My parents are from Jamaica, and as a first-generation low-income student I know the feeling of being the first.”

Despite Lightfoot's social policies, some question whether Lightfoot would be a progressive choice for working class Chicagoans, having been a former corporate lawyer who defended banks, pharmaceutical companies, and other multibillion dollar industries. Lightfoot also raised concern among voters due to her policies surrounding policing, who criticized her for her past experience as federal prosecutor and chair of Chicago’s police board.

Two weeks ago, Chance the Rapper endorsed Preckwinkle, citing his concerns over Lightfoot’s past history as a prosecutor.

“To be a prosecutor—to be not on the side of families of victims of police crimes, to me, puts you in the machine,” he said. He also claimed that members of Chicago’s Black community “don’t necessarily feel comfortable or safe going into a city where Lori Lightfoot sits on the fifth floor.”

Chance’s sentiment was echoed by others at Preckwinkle’s election night party, such as a county employee who wished not to be named due to their employment.

“[Preckwinkle] has not done anything that can be shown to intentionally harm marginalized communities,” they said. “With [Lightfoot’s election] there are communities that are no longer feel safe.”

In a forum on campus last month, Lightfoot suggested converting vacant schools into mini police academies, inciting further criticism on online forums about her policing proposals. She later clarified that she would only implement the proposal after “intensive community engagement and input process,” and the proposal reflects “the broader need to ensure officers can receive urgently needed training in or close to the communities where they work.”

Lightfoot has also been circumspect—as has Preckwinkle—about how she would deal with the city’s pension crisis. Lightfoot told the Chicago Tribune that she would address the pension problem through “progressive sources of revenue” and by cutting the size of city government via measures like eliminating the city treasurer’s office and city clerk’s office.

At the end of her speech at her campaign party, Lightfoot encouraged her supporters to “join together as one Chicago, indivisible and for all.”

Lightfoot will officially take office as the new mayor on May 20.

Update April 2, 11:37 p.m.: The article has been updated with additional quotes from people at the campaign parties.

We broke down how the neighborhood voted in Chicago's historic runoff election.