The Obama Paintings: A Presidency in 2,922 Moments 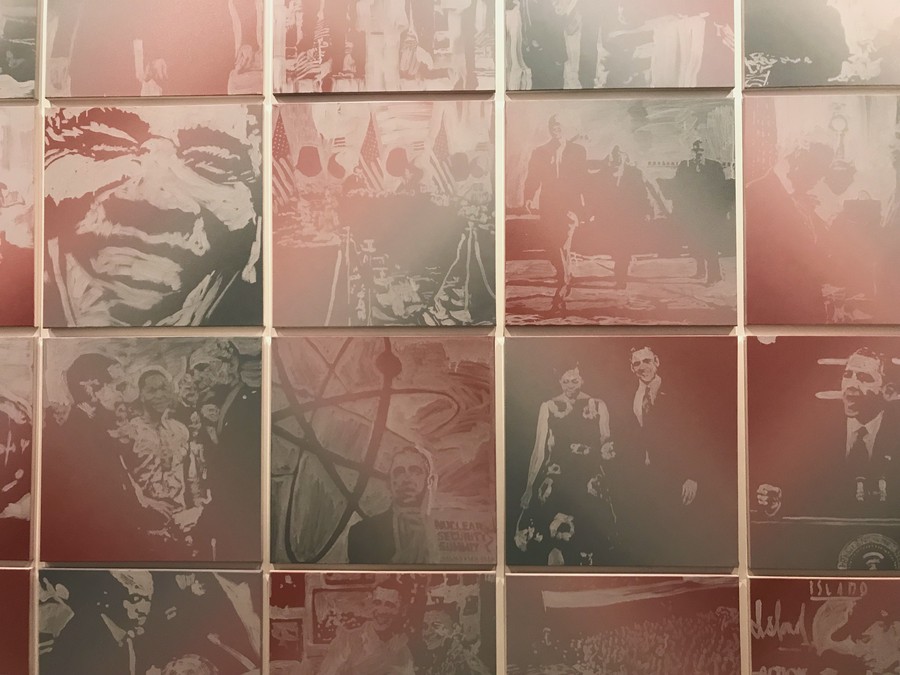 The paintings become an emotional reminder and tribute to a loved and well-respected leader, reflecting on Obama's character and the impact of his presidency.

There are thousands of artworks featuring former President Barack Obama in the world, and at the Stony Island Arts Bank, you can find 2,922 of them. Rob Pruitt, a New York–based visual artist, painted one of these portraits each day of Obama’s two-term presidency. The result is a cohesive body of work representing a multitude of historic and personal moments with Obama and his family. In some, he is signing important documents, and in others, he is spending time with his family, laughing and walking with his daughter Malia or cuddling with Michelle. These paintings do not only represent his political legacy, but also encapsulate his character as a father, husband, and role model.

In the Arts Bank, there is no more wall space. Red and blue portraits with drippy white paint line the walls from floor to ceiling, and the paintings that don’t fit are stacked on shelves. The images start to blur together the farther away the viewer is, cementing the idea of a “single body” of work. Pruitt wanted the walls to resemble the marble that constitutes the monuments in the nation’s capital. Each image is based on a photograph of President Obama on a different day in which he was in office. While each painting is unique up close, the full display creates an unchronological story starting with Obama’s inauguration on January 20, 2009 and ending with his retirement from office in 2017. The paintings are not displayed in any particular order, emphasizing that they are not meant to be a factual retelling. Many of the paintings are based on iconic photographs, such as Barack and Michelle hugging in the Oval Office, or the President awarding Vice President Joe Biden the Medal of Honor.

By transforming these photos into paintings, Pruitt does not alter the image itself, but rather highlights different features of it. According to Pruitt, “Paint is willful in a way that it is open to interpretation which creates a path for viewers to access the work…. I felt that by exaggerating its own mode of production, this legacy of presidential portraiture would burst into something less austere and more human.”

On his decision to include both historical and personal moments, the artist said, “I found that by including all types of moments, from eating shaved ice to meeting the Pope, a more multidimensional portrait emerges. By treating all the moments the same, by democratizing them, the work becomes like a library or record store, allowing viewers to peruse the paintings and curate their own relationship to Obama and his legacy.” Standing amongst all these paintings felt like stepping back in time, simultaneously experiencing all eight years at once. The paintings become an emotional reminder and tribute to a loved and well-respected leader, reflecting on his character and the impact of his presidency.

Having the exhibit at the Stony Island Arts Bank is important in itself. It is located on the South Side, near where Obama first began his career in public service, as well as the proposed location for the Obama Presidential Center. Even though many of the depicted scenes take place in Washington, D.C., the community where Obama developed his voice and goals played a large part in shaping his presidency.

When Pruitt began the project, he could not predict the nature of Obama’s presidency, or even whether he would be elected for a second term. He noted, “Of course you never know if you're going to stick with a project like this [one], but I realized that my commitment to the project and its entire scope is what would activate the viewers' feelings. In a way, I felt that my eight-year commitment to Obama echoed his eight-year commitment to the country.” The experience became a meditative and positive ritual for him. The process itself required active thinking about politics and current events. For Pruitt, this work made him less passive. “This project helped me reacquaint myself with American politics on a daily basis and I began to approach politics with a renewed vigilance.”

When Pruitt finished his last portrait at the end of Obama’s presidency, he said that rather than dwell on the work he had completed, he was motivated to remain politically engaged in protest against the incoming administration. “This might come as a surprise but there was no great flood of emotion upon finishing the last painting…. In a way, making the Obama Paintings equipped me with the tools to police the incoming administration and inspired me to be proactive instead of on defense.” Pruitt’s statement perfectly captures one of the themes of his work, which is that through highs and lows, through important events and seemingly unimportant ones, it is absolutely essential to be aware of politics, and to even be vocal about how you feel about them. And as demonstrated by Pruitt, art is an excellent vehicle for that expression.

When I asked Pruitt if he had a favorite among the thousands of paintings, he admitted that he did not: “I wish I had a better answer, but no, I really don't have a favorite. For me, it's hard to find meaning in one when the meaning belongs to all of them.” The Obama Paintings are a testament to the fact that their meaning and the country’s political narrative should be accessible to everyone.

The Obama Paintings exhibit is at the Stony Island Arts Bank until August 25.