To Resist a Fascist: Lost Voices Found in Translation

Collegiate Assistant Professor Miguel Caballero Vázquez and second-year Maya Osman-Krinsky talk to The Maroon about their exhibit on the poetry of the Spanish Civil War. 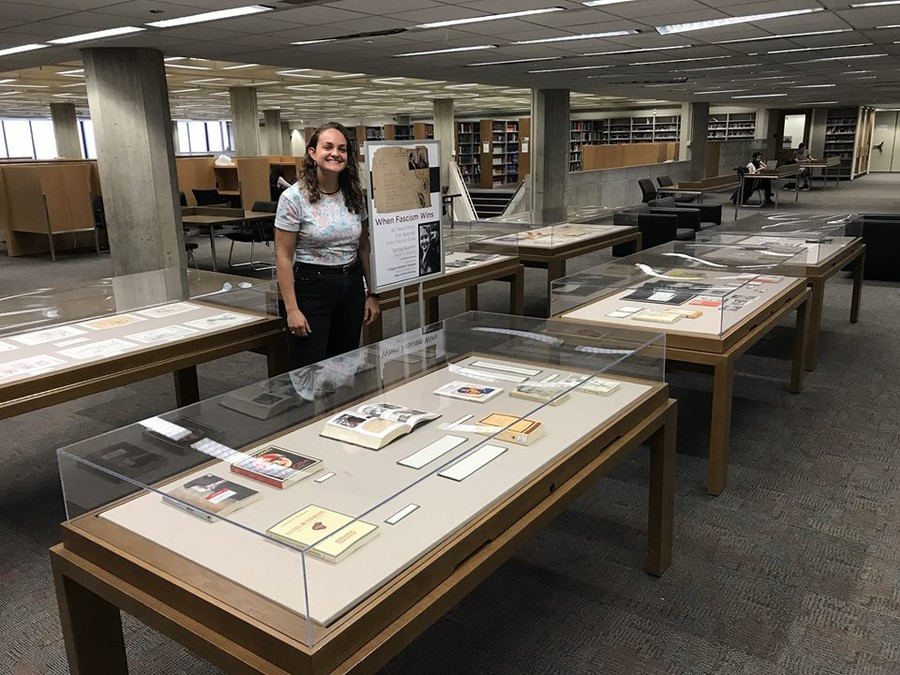 Second-year Maya Osman-Krinsky standing next to the exhibit they created at the Reg.

What happens when fascism wins?

This is the title and overarching concern of the Regenstein Library exhibit created by Collegiate Assistant Professor Miguel Caballero Vázquez and second-year Maya Osman-Krinsky. Exactly 80 years after the end of the Spanish Civil War, the duo (a native Spaniard and a poet of American origins, respectively) curated and translated a selection of Spanish poems written during the war. The authors of the selected works were either exiled or assassinated for opposing general Francisco Franco’s regime. The original texts, their masterful translations, and several historical paraphernalia are on display on the third floor of the Reg until the end of spring quarter. Many of these poems were translated for the first time for this project. I sat down with Osman-Krinsky and Caballero to discuss their groundbreaking project.

Chicago Maroon: Can you explain the concept behind the exhibit?

Miguel Caballero Vázquez: The idea of the exhibit was to commemorate the end of the war in Spain that happened exactly 80 years ago, in the spring of 1939. I also wanted to work with a student and do a project together and I knew that [Osman-Krinsky] was a poet. I think a nice way of commemorating and celebrating poets who were either killed or went into exile was to translate them into English.

Maya Osman-Krinsky: A way that I approached the translation project was to think about what does happen when fascism wins…. A lot of the headspace that I was in at the moment was to really think about the implications of a fascist ruler being in charge, and how that affects the art and thought that’s produced at the time.

CM: How did you select the poems?

MCV: I was looking at anthologies, because many of these poets, they published books, but their books were not very famous…. Also, we wanted to have a good representation of the different languages spoken in Spain. We have one poet in Catalan, and the others in Spanish.

MOK: We definitely felt, especially towards the end as things were more coming together, that we wanted to have geographical diversity as well.

MCV: Because one of the purposes of fascism at the time was to make one unified Spain, like all of regions of the country being the same and speaking the same language. That’s not the reality of the country. So it was also to make a point that this country is linguistically diverse and culturally diverse.

CM: What is the significance of Spanish Civil War?

MCV: I’m writing a book about the Spanish Civil War. It was also, as Maya mentioned before, the fact that fascism is being discussed again, and the definition of fascism is kind of blurry. Even in Spain it’s blurry—for the kids of Spain, it was also blurry.

CM: Maya, how did you connect to that?

MOK: Initially, approaching the theme and the historical period, I didn’t have a lot of background. I was excited, but there wasn’t a lot that I could connect to aside from the fact that it was poetry and in Spanish…. We separated the poems into three distinct themes, and reading into those themes helped shape a conception of what fascism was at the time.

MCV: Our idea was not to impose our topics on the poem—

MOK: But to let them emerge. So we translated one piece of prose by María Teresa León that was just a lot of specific lines that didn’t feel like they were particular to that time and place. They just felt very atemporal and universal.

MOK: I’m definitely lucky enough not to be in a position where if things really change for the worse in this country, I will have to leave…. But there were a lot of narratives that talked about: What does it mean to not be in your home anymore? What does it mean to then return, and it not being the same place that you left?

MCV: There is definitely a difference between exile and migration, but I don’t live in my home country, and this exhibition is about my home country, so I connect through that…. Should you return or not? That’s a question that is always in my mind, and I think in everyone’s that is living in another country. It made me reflect on the relationship between migration and exile. Those decisions of whether to return or not were very complicated. You can’t return simply because the dictator has died and now we have democracy in Spain. You have been out of your country for 40 years, and it’s a different country, and it’s hard to move back when you are 60 or 70.

CM: What made translation difficult?

MOK: With one poem in particular, we were sitting with it for a very long time and trying to, for lack of a better word, ram the English into the Spanish meter and rhyme, which was really hard and it wasn’t working.

MCV: This historical period in Spain at that time, you either had poems with totally free rhyme, or internal rhymes, and other kinds of poems with very strict, consistent, systematic rhymes. If you want to mimic that in English, it’s so tricky.

CM: What were your goals when you went into this project?

MOK: I think an overarching goal was to preserve as much of the meaning of the poem as possible while preserving the literal translation as well. But beyond that, when it came to things with more firm structure I wanted to try to stick to that as honestly as possible.

MCV: Something I learned from seeing Maya do it is that to preserve the original you have to actually—it sounds paradoxical—give yourself a lot of liberty. If you want to convey the same message, it’s going to be said in a very different way in English. So you have to allow yourself to play with language and just make sure that the final translation conveys the same meaning. But going word-by-word, line-by-line sometimes doesn’t work.

CM: What did you each take away from this project?

MOK: I came away from the project with a lot more knowledge about the Spanish Civil War. I was definitely eager to see and read how Spaniards experienced it. The experience of translation was something special that I think I’m going to hold onto for a really long time.

MCV: I think I learned a lot about translation and that’s probably something that I’m going to incorporate to my class, in the future, because you really learn a lot about the poem by translating it. And I also learned how to commemorate in different ways. I always, always want to commemorate people, not with a focus on their death, which is also part of the story of course, but particularly with their works, with their life, with their passions, with whatever they produce.

Download the latest Maroon podcast to hear a reading in both Spanish and English, as well as an extended interview.

This interview has been lightly edited for clarity and cut for space.