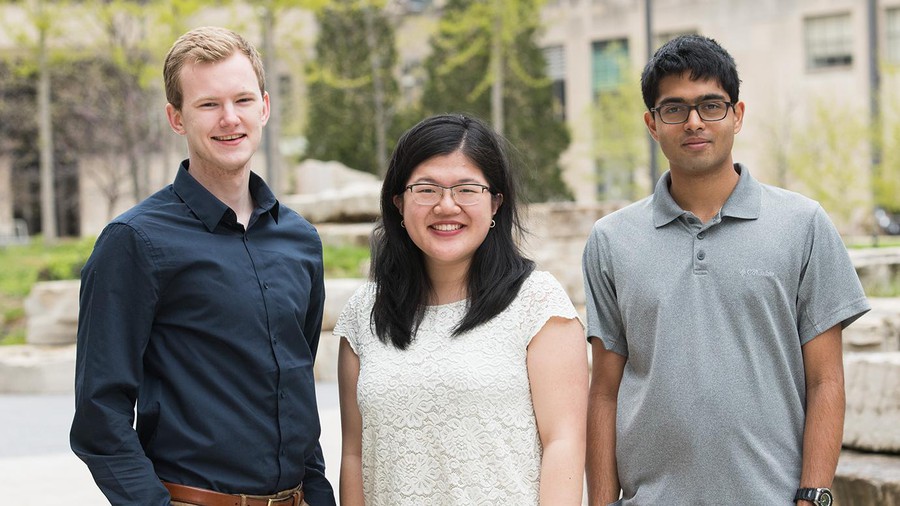 Three UChicago third-year students—Keir Adams, Nikhil Pandit, and Maritha Wang—were recently awarded Barry Goldwater Scholarships, prestigious awards given to high-achieving students in the natural sciences, mathematics, and engineering. The three were among 496 students to be awarded the scholarship this year.

The Goldwater Scholarship is a one- or two-year award that can be used to cover tuition, room, and board, among other miscellaneous school-related fees. The award grants $7,500 annually to the winners.

This year’s Goldwater Scholars from UChicago each represent a different discipline. Adams, a molecular engineering and chemistry major, is involved in astronomy research with Professors Takeshi Oda and Donald York on campus. He has also done research work through the Chemistry Exchange Program in the University of Edinburgh, where he helped develop materials for supercapacitors, devices used to store energy from renewable power.

Pandit, a mathematics major, is involved with research in symplectic geometry. He currently works with professors André Neves and Shmuel Weinberger.

Wang, a physics and chemistry major, is involved in material sciences research on campus. She works under the Jiwoong Park group to help develop 2-D materials for foldable electronic devices and serves as the managing editor of Scientia, an undergraduate science journal on campus.

All three students hope to pursue Ph.D.’s in their respective areas of research.