Student Government (SG) candidates gathered Thursday night for a debate ahead of school-wide elections, which begin today and run through Wednesday.

Third-year Ridgley Knapp is running to be the undergraduate liaison to the Board of Trustees, on on a two-pronged platform of promoting transparency in dealings with the Board of Trustees and increasing funding to RSOs that “pick up the slack” when dealing with University services like student counseling.

First-year Harry Gardner is running to be a Class of 2022 representative, and hopes to increase funding for identity and mental health–related RSOs.

Third-year Rachel Abrams, currently a Class of 2020 representative, is running for Community Government Liaison. Abrams plans to connect community members and leaders in Woodlawn to Student Government representatives in order to “brainstorm” solutions to gentrification. 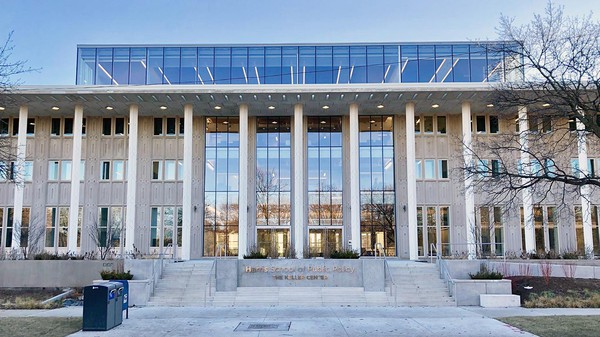 Jacob Hand, Courtesy of the University of Chicago

The Harris School of Public Policy on Friday celebrated its move into the completed Keller Center, which opened its doors for classes on January 7.

Metra stations face uncertain future: At its May 15 meeting, Metra’s board of directors will consider labelling the 47th Street stop in Kenwood and the 63rd Street station in Woodlawn as “underperforming” stations.

Financial Times ran a glossy spread on President Robert Zimmer in the Sunday U.S. edition of the business paper, detailing what the author called Zimmer’s attempt to “overhaul higher education.”

The Maroon’s Editorial Board argues that Metcalf internships need to be offered in a wide range of fields—beyond just finance—in order to expose students to the variety of career options out there.

Originally unfamiliar with Senegalese food, Adam Chan tried every item on Gorée Cuisine’s menu, and can now vouch that every dish is tremendous.

Rob Pruitt painted 2,922 portraits of President Obama and they are on display at the Stony Island Arts Bank.

Marvel's "Endgame" brings the franchise home (and brings in the box office bucks).

Senior Pitcher Joe Liberman looks back on his career on UChicago’s Men’s Baseball team, with a goal of continuing his passion for baseball after graduation.

Men and Women’s Track and Field compete at the UAA Championship meet in Georgia. With several standout individual placings, the teams looks forward as they continue their season.

Get this week's news download with the latest episode of the Maroon Weekly.

This week, a listener's study of the ancient love language of Greece and Rome has an uncomfortable clash with frat party hookups while Listen while Abby and Abby try to use their HUM close reading skills to parse through it all!