The Secret Life of Philosophers Revealed at the Neubauer Collegium 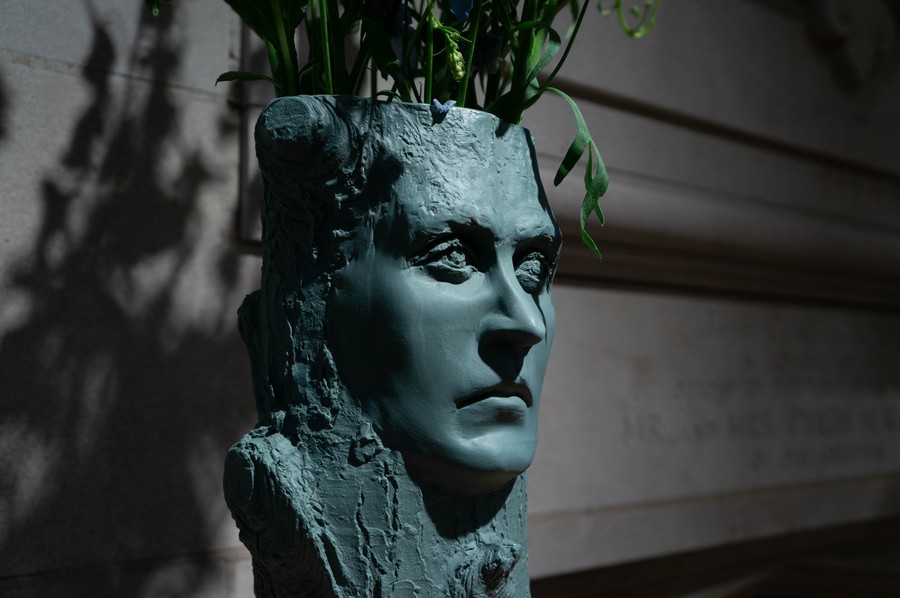 Wittgenstein's face emerges from a tree at the Neubauer Collegium's "HUTOPIA."

In 1936, Martin Heidegger gave a lecture entitled “The Origin of the Work of Art.” In his typical fashion, it was a winding, elaborate affair that must have been almost impossible to follow in person. One reviewer went as far as to compare it to “an abandoned landscape”. In the lecture, Heidegger sketches out his vision of art as something whose meaning is dependent on the artist, yet is itself the only way in which to understand the artist. Museums, for Heidegger, are the death of art. They decontextualize and diminish, turning the works they contain from living masterpieces into dead objects of collection. It’s rather odd, then, that curator Dieter Roelstraete would choose to focus his exhibition, in part, on Heidegger’s philosophy.

HUTOPIA is dedicated to its “three protagonists” Martin Heidegger, Ludwig Wittgenstein, and Theodor Adorno, as well as their respective huts. It’s an unusual, and even uncomfortable, cast—Adorno’s potentially racialized prejudice against jazz music has stained his legacy, while Wittgenstein was an abuser and Heidegger a Nazi. The exhibition’s choice to explore the three at their most solitary could be seen as an attempt to sidestep responsibility for discussing their misdeeds. Still, there is a sort of world-weary innocence in the choice of huts as a topic, throwing the focus from the men themselves to the contemplative capacities of being in nature. Wittgenstein famously spent enormous amounts of time at his hut in Norway, confessing his misdeeds to his friends in an attempt to purify himself.

The exhibit, a sort of fusion between art gallery and cabin, builds its own context and could be read as an attempt to accommodate Heidegger’s critique of the museum setting. Indeed, most of this work was made specifically for the exhibit. There is an enormous, skeletal hut frame with two perpendicular walls, which blocks any view of the main part of the exhibition from the entrance. One photograph hangs on each of the walls, confronting the viewer while surrounded by a much wider expanse of raw timber. The first photograph, taken by Ewan Telfor, depicts Adorno’s “hut,” which is, in reality, a rather unremarkable Los Angeles bungalow in which the theorist hid during his Nazi-imposed exile from Germany. On the other wall is a stunning photo by Guy Moreton of the Norwegian wilderness surrounding Wittgenstein’s cabin.

Turning the corner to the inside of the frame, a series of small photos become visible. They depict Heidegger in his hut, eating dinner with friends as his wife pours tea. The photos, it turns out, were taken by Jewish journalist Digne Meller-Marcovicz for a notorious Der Spiegel interview. The gallery guide notes that “Heidegger, the self-styled high priest of authentic Dasein, evidently appears to have enjoyed posing for Meller-Marcovicz’s camera.” This set of photos serve to situate the gallery—this is the only place where a real-life depiction of any of the three philosophers is displayed in the exhibit. The rest of the room focuses more on placing the viewer within the solitary world of cabins, providing the backdrop, the scenery, and even a reclining chair with a stack of books next to it. The small, white-framed pictures provide something to latch onto, serving as a bridge between the viewer in a “hut” in Chicago and the subjects of the exhibition.

The centerpiece of the exhibit is Alec Finlay’s Manifesto for HUTOPIA. It is a red diamond covered in pictures of cabins, luggage tags, and journal pages. Finlay is the son of famed recluse Ian Hamilton Finlay. Relics of his upbringing in his father’s enormous garden are on full display. The photos, as it turns out, depict bothies—small huts scattered throughout Scotland which anyone may use, free of charge. It is quite clear that they were the basis for the hut frame which occupies most of the exhibit.

Across from the photos of Heidegger is a rather strange sight—a large, stone fireplace flanked on either side by vases sculpted as busts of the three hut-dwellers. Wittgenstein is portrayed emerging from a tree, Heidegger is multi-faced and blue, and Adorno is made of terracotta and rocked back at an odd angle as flowers emerge from a long spout on top of his head. The vases add a touch of hominess to the cabin setting and the flowers growing from the top come off as lively and reminiscent of an actual forest. Yet, the vases themselves are hauntingly lifeless, crafted to reduce human faces to knick-knacks and decorations.

The whole exhibit falls in this vein. Successfully avoiding becoming yet another dull, decontextualized museum, it becomes spooky as you attempt to figure out what, exactly, it is trying to be. You get the sense that all the pieces correspond to one another. This isn’t a decontextualized museum, it’s a collection created to build something of its own. Everything fits, but not in the way you want it to.