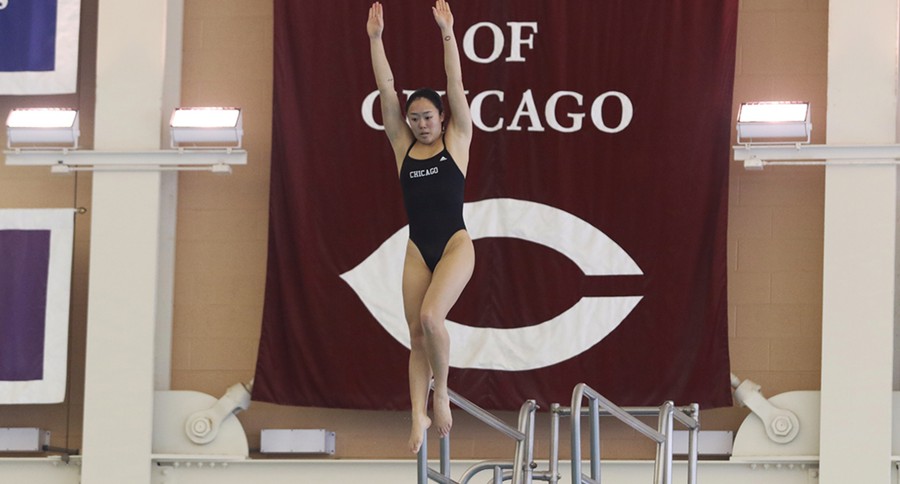 As one of the University of Chicago’s most accomplished student-athletes, third-year diver Agnes Lo has been named The Chicago Maroon’s Athlete of the Year. Turning in a phenomenal season, Lo owns an incredible record of achievements. This year alone, Lo was named All-American in both the one- and three-meter dives. Winning the NCAA regional championships in those events, Lo qualified to compete at the NCAA Division III National Championships in both, placing second in the three-meter dive with a score of 486.35, while earning third in the one-meter dive with a score of 468.45. Lo also emerged victorious from the University Athletic Association (UAA) Championships in both of her events, setting school, pool, and UAA records in the process. However, not content to simply excel in her athletic endeavors, Lo earned a place on the UAA All-Academic Team as well.

More than just her accolades, Lo’s work ethic also merits praise. In fact, fourth-year teammate Anna Girlich said of Lo, “Agnes is one of the hardest working divers I have ever met. She is always looking for different ways to improve…and it has really showed in her performances this year.” Not content to relish in the multitude of accomplishments from her first year, which included another pair of All-American designations as well as numerous broken records, Lo continued to develop her skills, allowing her to continue raising the bar this past season. However, her time spent honing her skills in the practice pool would amount to little without the ability to perform when it matters, a skill Lo possesses. According to Girlich, “She handles high pressure situations so well, which you don’t often see in a diver, and some of the biggest meets have been her best performances.” After asking Lo about her approach in these moments, she responded, “I like to not have expectations ever. I don’t think about results; I don’t think about what could go wrong.” According to Lo, “You take it one dive at a time.”

While Lo could easily bask in her myriad accomplishments, she stays humble. Lo attributes much of her success to the people around her, especially her teammates and coach Becky Benson, who recently received the honor of NCAA Division III Women’s Diving National Coach of the Year. In discussing the highlights of the season, Lo immediately mentioned regionals; however, she focused on something other than her victory, speaking about the way in which she and her teammates spent the meet dancing and cheering, lightening up what was otherwise a tense and stressful atmosphere. Glowingly, Lo remarked about her team, “We love each other so much. We want each other to succeed.” As for her coach, Lo said, “You could do however badly at meets and she would still love you just as much. She’s the best coach I’ve ever had in my life by far.” Later discussing what motivates Lo to keep pushing when many athletes quit, she quickly answered: “my team and my coach.”

Finally, discussing her biggest takeaways thus far in her collegiate career, Lo quickly responded, “I have so many answers for this.” Narrowing it down to one, Lo stressed the importance of learning “how to tough it out.” Explaining further, Lo remarked, “Diving is such a mentally demanding sport.” According to her, “Diving is 90 percent mental,” and consequently, “you can overcome things that you didn’t think you’d be able to before.”

With her fourth and final year upcoming, Lo will certainly look to continue her high level of achievement. However, when asked about her main goal, she smiled and said, “Try to have even more fun than last year.”