Life of the Spirit: A Guide to Religion on Campus 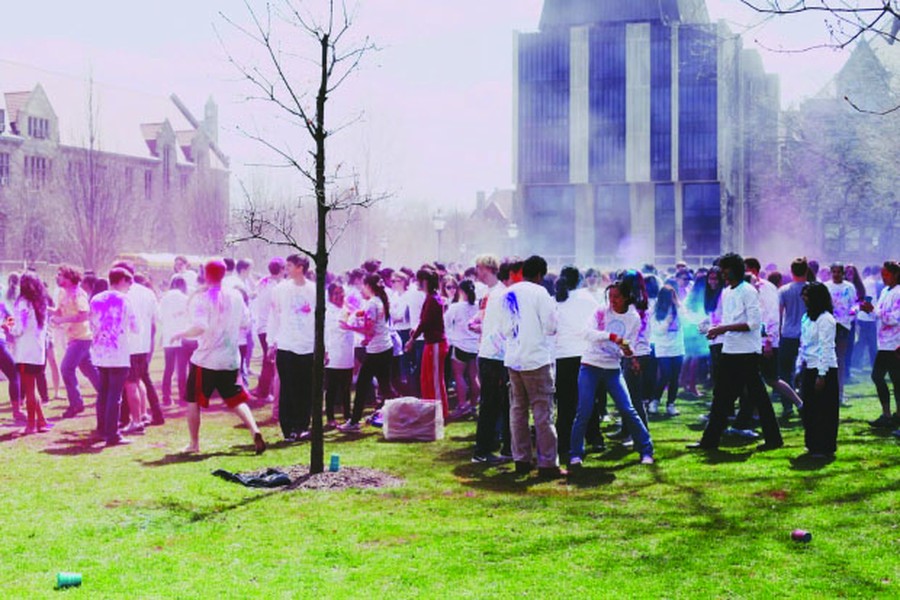 Student groups celebrate Holi, the annual Hindu festival of colors and spring, with playful event on the quad. Tide to Go required.

When I was deciding on where to go to college, I paid close attention to where I could find a strong Jewish community. Since I’m a Modern Orthodox Jew, I wanted to be sure I’d have support for my religious practices on campus.

Here are some of the religious student groups and organizations you can find at the University of Chicago and in its surrounding neighborhoods. This list is not exhaustive; check out Spiritual Life at University of Chicago’s website (spirit.uchicago.edu) to see more information about religion on campus, including interfaith and interdenominational events.

If you’re not connected to a particular religious tradition, two chapels on campus—Bond Chapel (on the main quad between Swift and Haskel) and Rockefeller Memorial Chapel (5850 South Woodlawn Avenue, 59th and Woodlawn)—are nondenominational and host a variety of programs for multiple faiths. 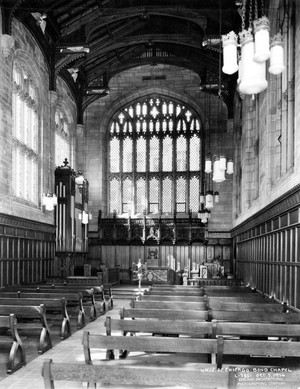 Spaces and groups on campus

UChicago Hillel (5715 South Woodlawn Avenue, a block east from Reynolds Club), where I’ve spent the lion’s share of my time at UChicago, has prayers, weekly Shabbat dinner and lunch, and Jewish learning and social groups. (Hillel recently announced that Shabbat and holiday meals will now be held at Baker Dining Commons.) On most Shabbats, there are Egalitarian, Reform, and Orthodox services; the Yavneh Orthodox group holds weekday services every morning at 7:45 a.m.

The UChicago Muslim Students Association holds a weekly Friday Jumu’ah prayer service at 1:30 p.m. in Bond Chapel as well as other programs such as Koran study, social events and guest speakers.

Second-year Zeeshan Khan, the Association’s president, told The Maroon that while the group is a registered student organization, it acts as a community. He was “pretty much involved as soon as I got to campus,” he said.

A Prayer Room for Muslim students sits the lower level of Ida Noyes (1212 East 59th Street, corner of 59th and Woodlawn), nestled between The Maroon’s own office and the office of Spiritual Life. The prayer room, scattered with prayer mats and soft cushions, is open during Ida Noyes’s regular hours, and can be accessed by ID card with permission from UChicago Spiritual Life.

The Body and Soul Lutheran Campus Ministry at UChicago, which is connected to the Augustana Lutheran Church (5500 South Woodlawn Avenue, next to Campus North), holds Sunday services, Scripture discussions, and more. Students at UChicago serve as peer ministers, fostering the ministry’s programming, including a Comfort Food for Finals night and volunteer opportunities.

Cru UChicago hosts weekly Bible study classes in South, North, and Reynolds Club, and students involved with the group go on retreats and run outreach events on campus such as dinners and speakers.

Episcopalian Brent House (5540 South Woodlawn Avenue, midway between 55th and 56th on Woodlawn) is a campus ministry that hosts Sunday Eucharist services every week at 5:30 p.m., followed by dinner. Their Wednesday service at 5:30 is followed by a guest speaker, Bible study, or social event. Reverend Stacy Alan, Brent House's chaplain, told The Maroon that she’s also always available to meet with students of any faith to “talk about what’s on their minds… remind people who they are, in our language, beautiful children of God.”

And members of the Catholic Students Association attend service events and retreats that provide students the chance to “pray and reflect on God’s movement in their lives,” according to their website.

The Hindu Student Sangam holds weekly meetings with prayers, songs, and food in Rockefeller Memorial Chapel’s Uncommon Room, Tuesdays around 7–8 p.m. Every year, the group also holds a Diwali puja (worship) in Rockefeller Chapel, where any student can come watch the prayers and light a candle, as well as a Holi celebration every spring where tons of students join in celebrating by playing with the holiday’s well-known colorful powders. 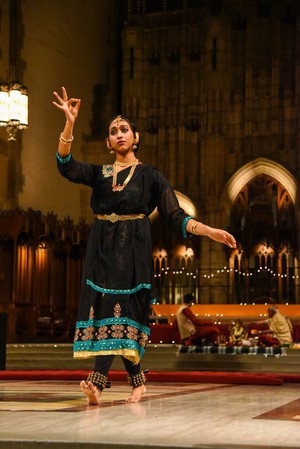 A student performs at a Diwali celebration in Rockefeller chapel.

Masjid Al-Faatir, the first free-standing mosque built in Chicago, sits at 47th and South Woodlawn on land donated by boxing legend Muhammad Ali. The turquoise-domed house of worship hosts Jumu’ah prayers on Fridays at 1 p.m. and keeps the times for its daily prayer services updated on its website.

The Protestant University Church (5655 South University Avenue, diagonally across from Reynolds Club) holds Sunday worship at 10:30 a.m., while running special events like yoga classes and initiatives such as a sexuality and gender book club. (It used to be home to Sanctuary Café, which closed in June.)

Right next door, the First Unitarian Church of Chicago (5650 South Woodlawn Avenue) is a Unitarian Universalist congregation that emphasizes inclusivity. They hold Sunday services weekly at 10:00 a.m. and use the sign outside of their building to often speak about campus issues, such as Graduate Students United. 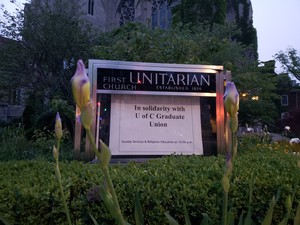 First Unitarian Church on 57th and Woodlawn has a sign up in support of GSU.