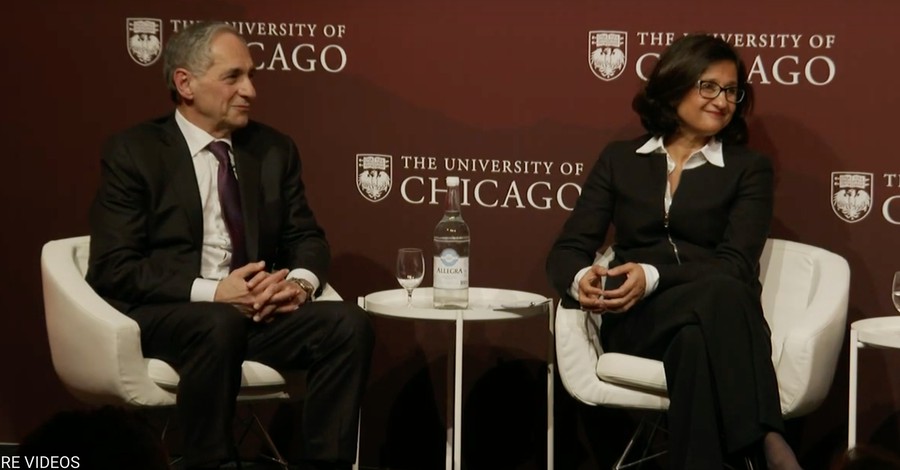 President Zimmer on a panel in Davos, Switzerland, alongside Minouche Shafik, director of the London School of Economics and Political Science.

University of Chicago President Robert Zimmer spoke about national and global trends in higher education on an annual panel in Davos, Switzerland on Tuesday. Zimmer was joined by Minouche Shafik, director of the London School of Economics and Political Science (LSE). UChicago Trustee David Rubenstein, J.D.’73, co-executive chairman of the Carlyle Group, moderated the discussion.

Rubenstein kicked off the discussion by referencing the University’s rise in the U.S. News & World Report rankings during Zimmer’s tenure, asking Zimmer what he thought was the biggest single change he had made during his presidency. Zimmer answered with his thoughts upon returning to the University to become president.

“Well, I have my own view...that a lifelong community that you’re a part of, and like any community you’re a part of, you want it to be great,” Zimmer said. “While rankings are peculiar in that there’s an arbitrary formula in them that somebody sitting in some office creates, the things that are being measured are often of interest, so they’re of some value, but one can’t take them that seriously.”

The discussion shifted to finances, with Shafik pointing out that the endowment of the LSE is “less than one half of one percent of Harvard’s.” UChicago’s endowment is about one-fifth of Harvard’s $40.1 billion endowment, according to reports from both institutions.

Zimmer acknowledged that he spends “quite a bit” of his time involved in fundraising efforts.

“The way I think about fundraising is really not just ‘we need money,’ but there are really set concrete things that we want to accomplish, concrete things that are expensive and sometimes difficult,” he said.Zimmer discussed the University’s recent capital campaign, which ended on December 31. The original campaign goal was $4.5 billion, but the University increased the goal to $5 billion as the campaign continued, Zimmer said. “We’re likely to close out when the accounting is done at around $5.4 billion, almost a billion dollars more than we originally hoped,” Zimmer said. The campaign raised more than any previous campaign at the University “by a long shot,” he said.

The forum then discussed Zimmer’s public stance on free speech. “My experience in life,” Rubenstein said to Zimmer, “is that many times you have people who are known for many things, but there’s one thing that they’re most famous for, but they don’t actually want to be known by that thing.... In your case, you’re going to be known forever as the man who cares about free speech.”

Zimmer replied that his statements on free speech are rooted in continuing the University’s culture: “I keep telling people who congratulate me on defending the First Amendment that it’s not about the First Amendment....As a private University we are not subject to the First Amendment, and what it’s about is, how do you deliver a great education? How do you create a great research environment for faculty? That’s our business.”

When Rubenstein asked Shafik about free speech at universities in the United Kingdom, she referenced the University of Chicago.

“I think the work that has been done in Chicago in terms of free speech principles has had a global impact,” Shafik said.