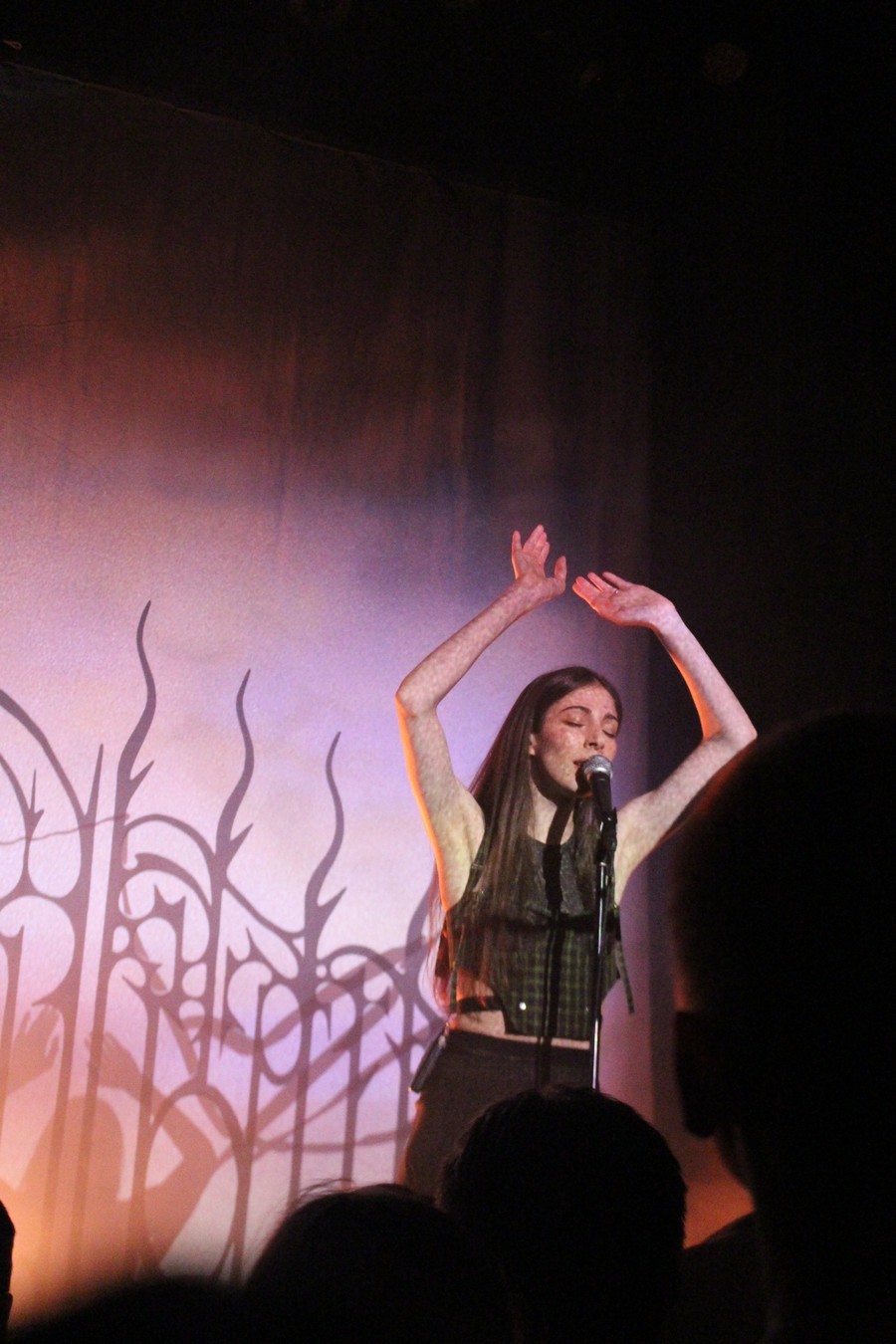 Standing in front of an enigmatic projection, Polachek proved she could dance.

“So Hot You’re Hurting My Feelings” is Caroline Polachek’s most popular song, if you go by the amount of listens the song has on Spotify. At first glance, this makes sense: the song has an irresistibly fun title. It also has some relatable lyrics about “cry[ing] on the dance floor,” followed by a wailing line, “it’s so embarrassing.”

But perhaps more significantly, especially for those who want to know more about who wrote the song, the song is a good introduction to Polachek herself: almost comically lighthearted and yet also completely serious.

When she walked onto the stage at Lincoln Hall last Wednesday night, the audience went crazy. Polachek made her way over to the microphone and addressed the screams with a single mellifluous “Wow.”

Then she stood still, her hands poised over the microphone as she took a look around the room. This stasis seemed to promise an equally static performance, maybe with some hip-shaking and arm-waving during the wilder moments.

She started things off on a mellow note, with her acoustic guitar and the song “The Gate.” As she moved around the stage, each gesture felt casual, but also tightly choreographed. She brought out some dance move classics: this naturally included rapid sequences of the lick-your-finger-touch-your-butt for “So Hot You’re Hurting My Feelings,” and some slow hair whipping to the chorus of “Caroline Shut Up.” At a few points she appeared to move freely but then whatever flowing action she was engaged in would suddenly end in a tight elbow jab, punctuating whatever verse she was singing.

As a result, the performance began to feel a bit like a one-man show. There was, however, another person on stage with her—the artist True Blue—whose blonde hair is appropriately streaked with royal blue.

With Blue on the synth, Polachek sang her way through her new album, Pang. On the wall behind her was a projection of…could it have been a door? (“Door” is her second most-played song on Spotify). Who could know for sure; the projection also looked distinctly gate-like, and if we’re going by titles, Polachek also has a song called “The Gate.”

This door-gate conundrum aside, the projection gave Polachek’s performance an otherworldly edge. Sometimes the gaps in it appeared an abstract collage, filled with images of leaves or the sky. Sometimes the door-gate disappeared altogether and was replaced by videos of water, which accompanied Polachek during her song “Ocean of Tears.”

Halfway through the show, Polachek paused. Before her next song, she explained, she needed to tell everyone a quick story about her dream. Standing at the very front of the stage, she gave a narrative of her dream, in which she was falling from a plane and ended up realizing that she had a parachute but then realized that she was falling into the ocean.

“So now I was going to die from drowning instead of suffocation,” she said. But suddenly, a gust of wind pushed her up and over LA, where she fell and landed on the pavement. The song that followed was, appropriately, “Parachute.”

Polachek performed one song that wasn’t by her: a surprising, but in retrospect completely fitting, rendition of “Breathless” by the Corrs. The performance ended after what felt like a strangely short amount of time; something seemed to be missing as she walked offstage. And indeed, something was.

As the crowd erupted into cries for “Door,” Polachek returned to the stage, smiling, framed by the door in the background.