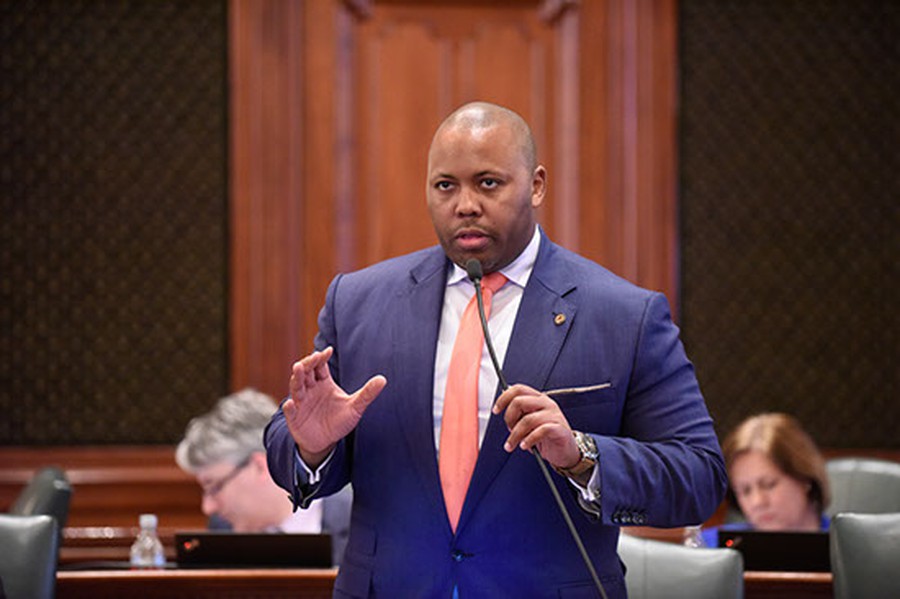 Kam Buckner is a member of the Illinois House of Representatives from the 26th district.

Appointed in January of 2019 to succeed Christian Mitchell, Buckner’s election platform is focused on workers’ rights, healthcare, education, and economic development. Before being appointed to the Illinois House of Representatives, Buckner worked in community relations for the Chicago Cubs, was the Executive Director of World Sport Chicago, and taught at the University of Chicago.

The Maroon sat down with Buckner to discuss issues in the communities he represents, what he hopes to achieve in his next term, and what he accomplished in his first term as a representative.

In his first term as State Representative, Buckner voted to increase the minimum wage to 15 dollars an hour and sponsored a bill that would codify Chicago teachers’ rights to bargain for class sizes and school day length. Expressing that his background played a major role in his legislative work this term, Buckner noted “I come from a CTU [Chicago Teachers Union] FOP [Fraternal Order of Police] family, I come from a union family, and I come from a family that respects organized labor,” before outlining his legislative record on workers’ rights.

Buckner credited organized labor with making significant progress on wage equality, another central issue of his platform. He stressed, though, that the issue can only truly be addressed with legislative action. “What the state of Illinois can do is punish those bad actors, punish those companies, those businesses in the state that have not made [wage equality] a priority, who have a clear and consistent record of running afoul of that principle and make sure that they pay.”

Buckner acknowledged the importance of housing legislation, such as the Woodlawn Housing Ordinance, to his constituents in downtown Chicago, Bronzeville, Hyde Park, Kenwood, and Woodlawn.

Despite being introduced to create legal protections that would prevent the planned Obama Presidential Center (OPC) from displacing Woodlawn residents, Buckner argued that the Woodlawn Housing Ordinance did not do enough to protect the residents of Chicago’s South Side from gentrification. Buckner instead expressed his support for the commonly cited community benefits agreement, which calls for the establishment of a community trust fund, stricter requirements for affordable housing, and a study that would assess the imposing of fees on large developers.

He also called for a neighborhood protection act that would prevent rent prices from rising too high in order to sufficiently address the issue of resident displacement due to the OPC. “People should be concerned, because we've seen this before, and we know how this movie ends if the people aren't heard, so I'm glad that people are continuing to speak up.”

Buckner said major issues with police recruitment entrenched departmental racism. “I know many people who are trying to get on the force who have not made it because they either failed a credit check or they failed a polygraph that asked them, ‘have they ever been gang affiliated,’ which, in Chicago, if you're from a certain neighborhood, you were born gang-affiliated by virtue of where your house is. And these things really weed out young black men, young Latino men, [...] the folks that know the community.”

Buckner went on to express the importance of reforming training, monitoring, and accountability. “I don't believe that legislation can cure racism or intrinsic or implicit bias. But what I do know is that legislation can put up parameters that make sure that when these things happen, the consequences are there and the cadence is normalized.”

Buckner spoke of a recent discussion he had with the Chief of Police for the University of Chicago Police Department (UCPD). “They came to me and said, ‘What can we do better? What have we done wrong? How can we change that?’ And I respect and appreciate any conversation that starts the way.”

He continued by asserting that the UCPD has an increased responsibility to be transparent, accountable, and sensitive. “I know the history. I know why folks have been upset. I know why they’re protesting, even recently, about it.”

“There is a real push now to create a more intentional symbiosis between the university and the community that surrounds it. So, I think that there is still much work to be done, but I do applaud the efforts.”

Buckner hopes to focus on economic justice in his next term by funding social programs and giving people tools to build their businesses, neighborhoods, and communities. “The people here make Chicago special. And we've got to find a way to bolster that intellect, foster the creativity, the innovation, and find a way to get Chicago to a spot, not where we can be what we what we used to be, but to give us a chance to be the city that we’ve always deserved to be.”