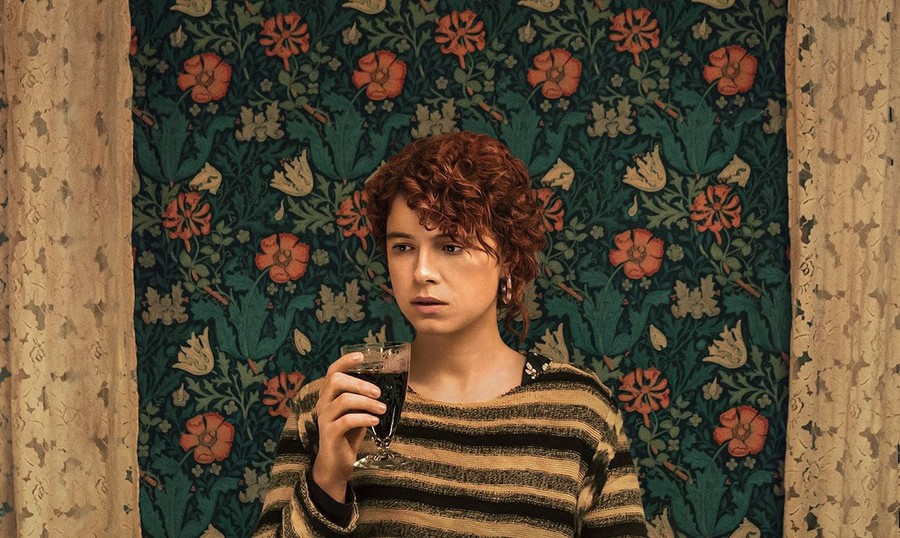 Director Charlie Kaufman is very methodical and intelligent when it comes to his writing, and "I’m Thinking of Ending Things" is certainly no exception.

The following film criticism contains major spoilers for the film I’m Thinking of Ending Things as well as references to suicide.

Netflix’s I’m Thinking of Ending Things is without a doubt one of the strangest, most out-there films I have seen in a long while, not just in 2020. I watched the film with a couple of friends, and once the end credits rolled, all we could say to ourselves was, “What the fuck?” This is a film that can be incredibly frustrating and confusing at times. It is also a movie that will stick with you, and something I will most likely revisit in the future.

I’m Thinking of Ending Things, written and directed by Charlie Kaufman (Being John Malkovich, Adaptation, Eternal Sunshine of the Spotless Mind) follows the story of an unnamed woman (Jessie Buckley) who travels with her boyfriend Jake (Jesse Plemons) to meet his parents (David Thewlis and Toni Collette) while she contemplates ending her relationship with him.

This is a film that I have been looking forward to for quite a while, given the involvement of Charlie Kaufman. Kaufman is a deep, surrealist writer who explores themes relating to identity crises, mortality, and the meaning of life. The movies he writes demand multiple viewings if one wants to fully understand them and the messages they express. Whether it’s understanding what it truly means to be John Malkovich, how to get over a breakup with someone you thought was the one, or dissecting Kaufman’s mind and what goes through his head, Kaufman is very methodical and intelligent when it comes to his writing, and I’m Thinking of Ending Things is certainly no exception.

While I’m Thinking of Ending Things may present itself as a simple road trip story with surrealist elements, it actually tells a story about a man contemplating suicide. Throughout the film, there are several scenes that focus on an unfulfilled, depressed janitor (Guy Boyd); by the end of the film, the audience realizes that the janitor is the most important character in the entire movie.

I’m Thinking of Ending Things follows an old, depressed janitor who struggles with suicidal thoughts. To combat it, the janitor fantasizes about what his life could have been like if he had asked out the woman he sees through the window in the opening scene. Events in which the janitor’s physical appearance is uninvolved are all inside this janitor’s fantasy, with Jake (the boyfriend) representing the janitor’s younger self. Everything that happens within this fantasy is a series of hypothetical situations of the janitor’s life had it not been for his timid nature, a character trait that his mother mentions in a scene where the girlfriend talks to a younger version of the mother. Grasping this twist completely changes how you view the events that occur in the film, especially upon a second viewing.

This fabricated fantasy explains the strange, abstract events that occur throughout the film. The girlfriend possesses multiple names—Lucy, Amy, Lucia—because the janitor hasn’t really come up with one. Jake’s parents’ ages fluctuate because the janitor is not entirely sure at what point in his life he will get the chance to introduce his hypothetical girlfriend. Jake fears the basement because the basement contains everything that symbolizes the janitor’s failures and grim reality: the janitor’s uniform in the washing machine and the abandoned paintings labeled “Jake,” which indicate that the janitor’s past artistic aspirations, now lost forever.

I’m Thinking of Ending Things is described by some as a horror film, and while I believe there is some truth to that, it is much darker than any conventional horror movie like The Conjuring. The sinister force in Kaufman’s movie isn’t a ghost or a crazy murder cult, but something much more sinister and grounded in reality: the feeling of loneliness and worthlessness. Throughout the movie, the janitor seems incredibly unfulfilled with his life as he lives in solitude. He hates working as a janitor at his school because no one notices all the good deeds he has done, as mentioned by his fantasy self. Instead, he is either ignored or sneered at by students at the school (who, interestingly enough, also appear in his fantasy at the ice cream store). This is all conveyed by the janitor, who, despite not saying much in the movie, managed to break my heart by the end of the film. The only thing that gives the janitor any purpose in life is the arts, which is why elements of musicals, movies, and poems are either incorporated into his fantasy (e.g. music from the musical Oklahoma!) or explicitly referenced (poems by William Wordsworth). The janitor finds fascination with art that people treasure because of its sense of timelessness, something that the janitor wishes he had.

The janitor eventually gives in to his suicidal thoughts. The janitor (not Jake) later encounters the girlfriend who is trying to look for her boyfriend. When the janitor asks what he looks like, the girlfriend says she doesn’t really remember his appearance. Instead, she reveals that nothing happened between her and Jake on the night they met, claiming she was made uncomfortable by Jake staring at her. After the girlfriend gives this confession, the janitor/Jake finally comes to terms with himself, which is indicated by the sad smile the janitor gives to the girlfriend before Kaufman transitions to a beautifully choreographed ballet scene.

Through Kaufman’s writing, direction, and the janitor’s performance, we, the audience, understand that no matter how much the janitor fantasizes, he cannot change the reality of his situation, and while a younger man may have done something to change his life, the janitor/Jake is now too old to do such a thing.

The janitor is forced to face his wasted potential, which is symbolized by a ballet sequence that follows the girlfriend’s confession. More attractive-looking versions of Jake and the girlfriend begin engaging in a ballet, and right when they are about to get married, another dancer, dressed as the janitor, tries to steal the girlfriend. The girlfriend runs away from this janitor dancer, causing the dual Jakes to fight one another before the real Jake stabs fantasy Jake to death, ending the janitor’s imaginary sphere for good. After cleaning the school one last time, he goes back inside his truck, sets the key down, and decides to let himself freeze and die of hypothermia rather than continue to live in his depressing, grim reality.

Movies like I’m Thinking of Ending Things are why I love Charlie Kaufman. The movies he writes and directs have relatable messages I enjoy. Admittedly, I was a bit frustrated after watching the film the first time because I simply did not understand what Kaufman’s message was. However, I better understood the meaning after the second viewing, and I also appreciated it more. Not only do I recommend you watch this film, I recommend you watch it twice. I would give it a 9/10.