"On the Rocks": A Portrait of the Artist as a Beleaguered Housewife 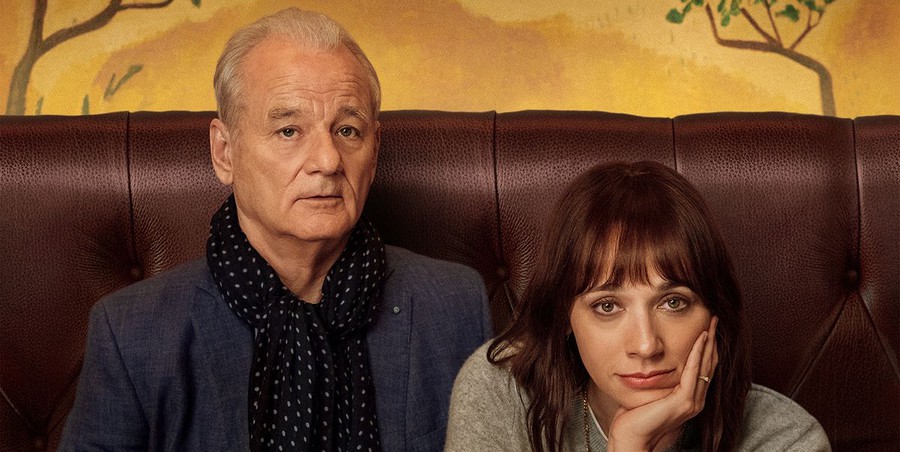 Sofia Coppola’s latest film "On the Rocks" is not about new love.

On the Rocks starts with a red herring: a brief moment at the wedding of Laura (Rashida Jones) and Dean (Marlon Wayans). They sit next to each other, holding hands under the table, completely oblivious to the guests milling about and speeches being made, staring into one another’s eyes with a giddy euphoria that only the ecstasy of new love can elicit. With but a whisper, they make a secret pact and sneak away from the festivities, giggling their way to the hotel pool, where they splash around in their formal clothing, not a care in the world.

Sofia Coppola’s latest film is not about new love. In the very next scene, gone are the excitement and spontaneity of that clandestine retreat; Laura is now a mother of two, picking up toys strewn around her apartment floor. Gone, too, are those loving looks exchanged by the newlyweds; Laura and Dean’s interactions mostly consist of lightly forced smiles and pecks on the cheek in the mornings. The colors have dulled, the bright blue of the pool giving way to the grey of the overcast Manhattan skies, providing an immediate hint of the dimmed luster of the romance. Although never saying so, these veterans of marriage both seem painfully aware that the spark has dissipated, their union no longer a treat so much as a chore.

The fact that the trajectories of their careers have begun to diverge does not help matters. Dean is often on the road promoting his new business, some kind of social media management venture that involves a whole lot of wining and dining with prospective clients. At least, that’s how he explains his extended absences from home, which leaves his wife looking astonishingly like a single mother as she ferries her kids to their various schools, daycares, and classes. Laura, on the other hand, is a burgeoning writer who has signed a book deal yet cannot seem to get pen to paper. Agonizing moments are spent with her in front of a blank computer screen, staring out her (enormous) windows in her (astonishingly massive) home office, tapping her fingers aimlessly on the desk, emphasizing the fact that they are not clacking on the keyboard as they ought to be.

This career and marital malaise come to a head with an event that spurs the film’s narrative thrust. Dean comes home from a business trip evidently exhausted, laying down next to Laura and showering her with physical affection—only to suddenly stop, looking confused, as though he has mistaken her for someone else. Laura, being in the rut she is, immediately suspects the worst. So does her father Felix (Bill Murray), a lifelong playboy and fabulously successful art dealer who seems to be preternaturally incapable of turning off the charm. In spite of his womanizing ways (having left Laura’s mother for another woman long ago), he has a deep, evident love for his daughter and possesses the prototypical misgivings of a wary in-law. He urges Laura to join him in getting to the bottom of the matter, a proposition which she agrees to with only cursory resistance, eager for a distraction from her nagging writer’s block.

The special ingredient that elevates Coppola to the pantheon of great artists is how easy she makes her filmmaking seem. Her best films feel less like a forced progression of scenes than a collection of moments in the lives of real people. This allows her to evoke a sense of authenticity that can be difficult to attain for directors who make it clear from shot to shot how hard they are working. It is what makes The Virgin Suicides such a powerful meditation on the angst of youth. It is what puts Lost in Translation among the most exquisite evocations of melancholy ever put to screen.

There are certainly elements of On the Rocks that hit these notes. Coppola fills the film with little details that, while peripheral or even unrelated to the narrative, are crucial to building a compelling atmosphere. Those shots of Laura repeatedly picking up those toys from the floor, sitting in her office making labels for notebooks rather than writing in them, attending mommy-and-me singing classes with her toddler. The running gag in which Laura, waiting to drop one of her kids off at school, is forced to hear all the asinine details of a fellow parent’s (Jenny Slate) romantic endeavors.

That running gag points to Coppola’s willingness to largely avoid the tonal heaviness that characterizes much of her past work. It is a bid that pays off, chiefly due to the presence of Bill Murray, who sparkles on the screen in a role that could not be further from his alienated washup in Lost in Translation. For Felix, every moment seems to be Suntory time. He is a self-conscious purveyor of toxic masculinity, unable to keep himself from commenting on any and every female’s appearance, and yet able to get away with it because he is so damn lovable. “It must be fun being you,” Laura says after a particularly incredible bit of charm that gets him out of trouble he had no business avoiding. He smiles, eyes gleaming, and speeds off in his red convertible. What a life!

Where On the Rocks fall shy of expectations is the screenplay. It is the one element of the film where things feel even slightly forced. Conversation after conversation between Laura and Felix hits you over the head with debates about the nature of men and women—how each behaves and ought to behave around the other, whether monogamy is feasible in the long run, and the like. “Males are forced to fight to dominate and impregnate all females,” Felix declares during one lunch. As a soundbite, it’s funny. But when the same type of declarations infiltrate scene after scene between father and daughter, that magical Coppola authenticity starts to fade away. All of a sudden you remember that you are watching a movie, rather than stepping into the lives of a few real people at an interesting crossroads.

It is essentially the only false note in what is a breezy, sincere film writ large, but nonetheless a crucial one that holds it back from Coppola’s upper echelon. In a perverse way, the near perfection of some of her past work has set the bar almost insurmountably high for the talented filmmaker. On the Rocks comes breathtakingly close to clearing it, but cannot quite get there.