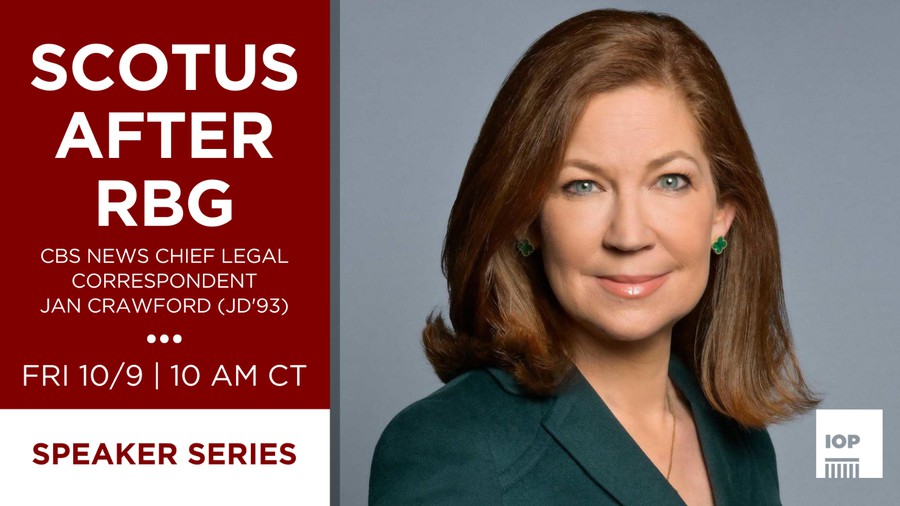 In a virtual event held by the Institute of Politics (IOP) last Friday, Jan Crawford (J.D. ’93), the chief legal correspondent at CBS, spoke about the late justice Ruth Bader Ginsburg and judge Amy Coney Barrett’s upcoming Senate confirmation hearing. The conversation was moderated by Aziz Huq, the Frank and Bernice J. Greenberg Professor of Law at the UChicago Law School.

The event opened with a commemoration of Ginsburg, for whom Aziz Huq clerked. They then discussed what her death means for the court and how the appointment of Barrett may play out in the coming weeks.

Crawford anticipated the hearings’ procedure. On Monday, she said that senators would deliver opening statements before Barrett is sworn in and delivers an opening statement of her own. They would then spend Tuesday and Wednesday questioning her. Crawford expects Barrett to follow the pattern of previous appointees, responding to most questions by either saying that she has no views on the matter or by saying she cannot speak on potential issues and Court cases.

“There is nothing normal about what will happen next week,” Crawford said, adding that there will be “hundreds of people showing up outside protesting and arguing.”

Huq and Crawford then transitioned to the obstacles that COVID–19 could present for the confirmation, including the recent infections of multiple GOP senators. Crawford confirmed that the hearings will be held in person even if some infected senators have to participate virtually.

However, Huq said that Senate rules require votes to be cast in person by senators, meaning that if enough senators cannot come to the floor to vote, the vice president may have to step in to act as a tiebreaker.

As the conversation shifted to Barrett’s judicial philosophy, Crawford said that Barrett was an originalist like Supreme Court Justice Antonin Scalia, for whom she clerked for during the 1998 term.

She pointed out that some of Barrett’s views still differed from her old boss’s though. “Scalia wouldn’t have said that felons have a right to gun ownership,” Crawford said. But in Kanter v. Barr, Barrett argued in a dissenting opinion that non-violent felons retain their individual right to own firearms.

Huq ended with a brief discussion of court packing. Crawford said that she would “like to see a serious discussion of term limits” before increasing the number of seats on the Court.