The American Federation of Teachers was joined by the Chicago Teachers Union in covering concerns about reopening schools in Chicago. 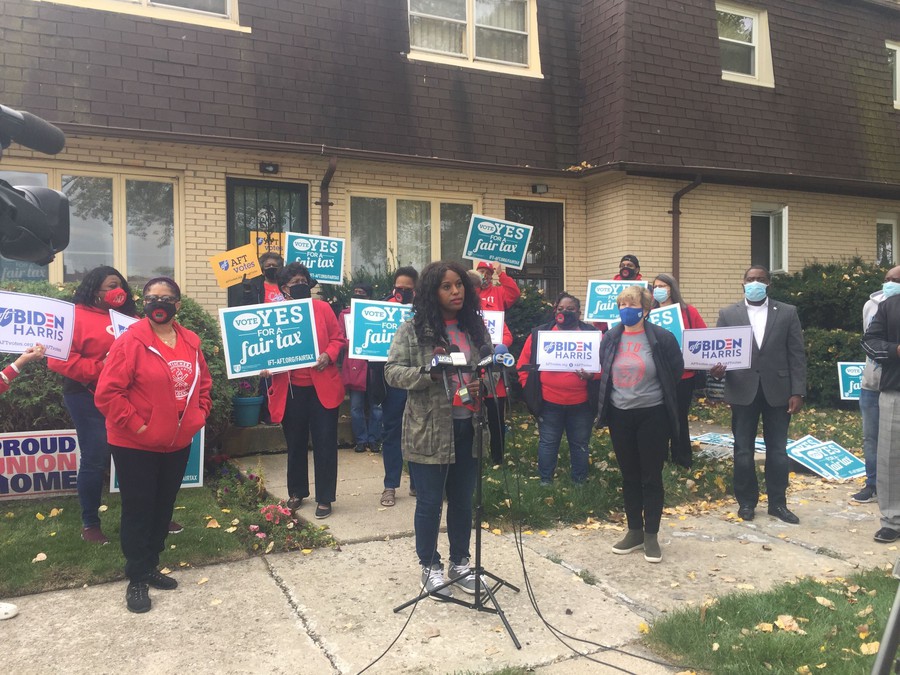 The Fair Tax Amendment is a measure on the November ballot that would amend the state constitution to allow Illinois to replace the current flat tax rate with a progressive income tax structure. If 60 percent of Illinois voters vote in favor of passing the measure, a bill passed by the legislature and signed by Governor Pritzker in 2019 would take effect, raising rates for taxpayers making more than $250,000.

AFT President Randi Weingarten said that passing the Fair Tax Amendment would fill gaps in the state budget that underfund sectors such as education, helping teachers who are struggling to meet the needs of remote teaching.

The question of how much money Chicago’s public schools need, and by extension where it will be coming from, underlies CTU’s current dispute with Mayor Lightfoot’s office over whether and how to reopen schools. CTU Vice President Stacy Davis Gates voiced concerns that school buildings would need to be renovated in order to improve ventilation and filtration systems before it is safe for in-person classes to resume, and she emphasized that the safety of teachers and students must be the city’s top priority when considering school reopening.

“It costs money to reopen schools in a pandemic, and these are schools that have been under-resourced for generations. We cannot magically think that we can bring people back into unsafe situations,” Gates said.

She pointed out that infection rates have risen as restrictions on bars and restaurants have been relaxed, and that many of Chicago’s primarily Black and Latinx neighborhoods suffer from significantly higher rates of infection than the rest of the city.

“I would ask this question: What has changed with the virus [and] with the rate of infections since March that would make for a safe reopening in Chicago? If we can’t answer that question then we have to go back to the drawing board.”

Weingarten said that any school reopening plan needed to include input from CTU on how to provide teachers with a safe workplace. Lightfoot’s administration has so far been reluctant to negotiate with CTU again over pandemic working conditions after finalizing a collective bargaining agreement last fall. In May, Lightfoot told reporters that she would not consider reopening contract negotiations, and CTU filed a complaint with the state alleging that the city violated emergency regulations by failing to discuss remote learning plans with the union.

“It’s nonsense to not be talking to CTU,” Weingarten said. “It’s ridiculous. It is basically a recipe for disaster.”

Gates emphasized that aside from the issue of reopening schools, teachers need more resources to develop better online learning models and serve their most vulnerable students, particularly special education and bilingual learners. The funding necessary to relieve some of the pressure on teachers, suggested Cook County Commissioner Brandon Johnson, could come from increased taxes on Illinois’s wealthiest citizens, some of whom have spent millions campaigning to oppose the measure.

“There is a real enemy that continues to lurk around the city of Chicago and the state of Illinois, and that enemy is structural racism. It’s white supremacy, quite frankly,” Johnson said. “It’s why it’s so easy for somebody like Ken Griffin to spend hundreds of millions of dollars so that Black women and brown women will have to carry the burden that he refuses to do. That’s a wicked system.”

According to the Chicago Tribune, Griffin has so far spent nearly $50 million opposing the amendment, while the governor’s cousin Jennifer Pritzker pitched in $500,000.

In addition to the Fair Tax Amendment, Weingarten and other speakers expressed support for Joe Biden’s presidential campaign, citing his promise to triple funding for Title I, which issues federal grants to schools with high percentages of low-income students.

“One of the things [the pandemic] exposed is that wealthier districts and wealthier parents could create pods to overcome some of the losses,” Weingarten said. “[That’s] why Joe Biden’s proposal for tripling Title I is so important, because it’s a way of overcoming the resource issue which then can pay for the instructional things we need.”