Maroon Archives Tell the Story of the 1918 Spanish Flu, a Picture Not Dissimilar From Today’s Coronavirus Pandemic

Viral testing and vaccines were years away from widespread use, but Chicagoans in 1918 implemented similar hygiene and social distancing measures to prevent the viral spread. 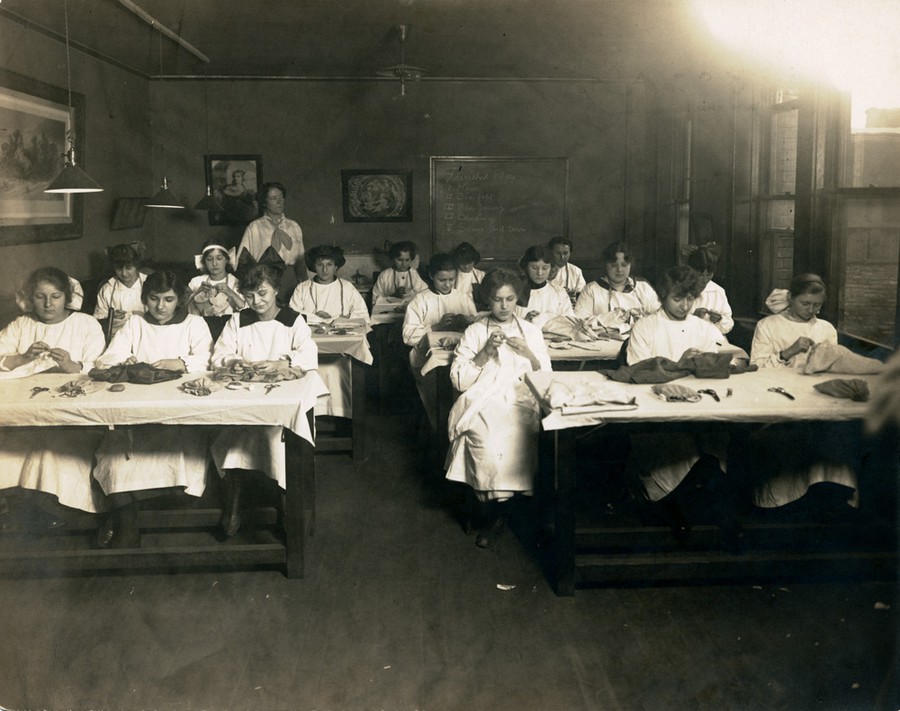 Students In Sewing class at the University of Chicago settlement school, May 17, 1918, several months before the flu arrived.

Through the past year, the COVID–19 pandemic has drastically reshaped the average American’s way of life and upended the traditional college experience for UChicago students. However unprecedented these times may feel, the city of Chicago reckoned with a similar pandemic almost exactly 100 years ago.

The influenza virus strain commonly referred to as the “Spanish flu” reached the United States in 1918, a year after the nation entered World War I. Researchers have no consensus on the origins of the virus. However, it did spread domestically from soldiers returning to the U.S., who brought the virus to military bases, including Naval Station Great Lakes (NSGL), about 40 miles north of downtown Chicago.

In September 1918, when the first sailors at NSGL contracted the flu, the station proactively implemented a number of preventative measures. NSGL enacted quarantine controls, though not one strict enough to prevent a wedding ceremony. A number of sanitary measures were also implemented; “50,000 men will be given daily nose and throat sprays. Sneeze screens have been placed in sleeping quarters and other places where the men assemble,” the Chicago Tribune reported on September 15.

Ultimately, the station’s commandant, W. A. Moffett, was confident that a day off duty and exposure to fresh air would prevent the disease. However, days later, students from Northwestern’s Student Army Training Corps contracted the virus. As the death toll rose at NSGL and sickness spread through the North Side, Chicago Health Commissioner John Dill Robertson prepared for the nearly inevitable spread through the city by issuing isolation orders for anyone experiencing symptoms.

As a respiratory disease, the H1N1 virus of 1918 had a similar mechanism of transmission to COVID–19. Consequently, medical professionals like Robertson advised Chicagoans to reduce crowding and isolate themselves if they were experiencing symptoms.

“No matter what particular kind of germ causes the epidemic, it is now believed that influenza is always spread from person to person, the germs being carried with the air along with the very small droplets of mucus expelled by coughing or sneezing, forceful talking, and the like,” Robertson wrote in a health report that was published by various city papers. “If there is cough and sputum or running of the eyes and nose, care should be taken that all such discharges are collected on bits of gauze or rag or paper napkins and burned.”

Regardless of this early understanding, Chicago found itself vastly unprepared for the first wave of the influenza epidemic. By September 1918, Cook County Hospital had a shortage of hospital beds with Chicago residents who had contracted the flu and the city was bracing itself for the full scale of the epidemic. By October 9, UChicago had already accumulated 26 flu cases on campus.

The Flu at UChicago

When The Maroon broke the news of campus closing in March of 2020, students were preparing for finals. In 1918, students were preparing for war. The Maroon’s reporting from 1918 reveals an impatient attitude among a student body already burdened by the war. One article from October 23, reporting on a football practice, treated the virus like a temporary nuisance among much greater stressors.

“Several of the men are expecting to be in the next lot of men sent for officers’ camps, and they are not showing very much interest in the game. The ‘flu’ restrictions are also setting to kill interest,” The Maroon reported (“Military Work and ‘Flu’ Kill All Pep in Maroon Practice,” 10/23/1918).

In an isolated part of Chicago, University students were sheltered from the extent of the virus until late into the pandemic, which would come to infect a third of the U.S. population. And with European enemies on Americans’ minds, little did they expect that this invisible threat would take more lives than the war itself.

According to the same issue of The Maroon, cases at UChicago initially started off much lower compared to other areas of the city. But when numbers rose dramatically at the start of the influenza pandemic, changing the forecasts of severity within days, students and news coverage caught onto the pandemic’s significance. Through October, The Maroon’s headlines changed tone from “No Occasion for Alarm About Influenza Epidemic” (10/9/1918) to “’Ware Influenza!” (10/22/1918).

At the beginning of the epidemic, students were dissatisfied with the University’s lack of transparency. Lacking the power of email or a UChicago Forward dashboard, students in 1918 were left in the dark.

“Although it seems impossible to get any official statement from University authorities on the campus influenza situation, all evidence points to the fact that the number of fairly serious cases has increased in the last few days to quite a degree,” The Maroon wrote.

Once the University gathered itself and settled in to face the epidemic, an emergency office sprung up to meet community needs and care for individuals with the virus. “Women members of the faculty and wives of professors have been rendering aid to neighborhood families. An emergency office has been established in the rooms of the Woman’s War Aid in Lexington Hall,” The Maroon wrote (“University Remarkably Free From Influenza,” 10/23/1918).

A temporary hospital was established at 5826 Ingleside Avenue, The Maroon reported (“‘So Called Flu” Is on Decline at University Say Experts in Charge,” 1/23/1920). The University also converted its settlement house, a product of Jane Addams’s urban reform movement, into a staging ground for the epidemic. The settlement house also provided emergency hospital space and served about 3,000 meals a day from their kitchen, the exact number UChicago Dining offered to South Side community members this March.

Without any medical or pharmaceutical interventions, people in 1918 relied on sanitary measures to prevent the flu, many of the same ones used today. “Lectures have been given, bulletins posted, ‘flu’ masks distributed and all that. However, to have any kind of success students must watch carefully. Sneezing and coughing send out germs; poorly ventilated rooms increase and re-distribute germs,” The Maroon reported in October.

As the main avenue for prevention, limiting of social gathering was stressed as a social responsibility, using much of the same rhetoric seen today. With messaging striking similar to editorials published in The Maroon this year, an October 1918 bulletin to the University penned by a Dr. Reed reads, “Any person who sneezes or coughs without putting a handkerchief completely over the nose or mouth is a menace to the health of others.”

Social distancing guidelines, or “limitations to gatherings” as they were referred to in 1918, were implemented early on as one of the only proven ways to prevent the spread. However, closures were slow and inconsistent across gathering spots, and convenience often took precedence over safety.

Occupation with the war caused civilians to ignore many of the warning signs and safety guidelines of the pandemic. Robertson hesitated to implement gathering restrictions early and moved slowly when he did, not wanting to disrupt war efforts or bring further burden to Americans already consumed with the war.

Finally, in mid-October, the Illinois Influenza Advisory Commission passed binding resolutions banning public gatherings including social events and dances, banquets and dinners, lectures, funerals, and athletic events. However, churches, streetcars, and even restaurants and theaters were allowed to remain open as long as they maintained adequate ventilation.

At the very beginning of the 1918 pandemic, Robertson allowed a Liberty Loan parade to continue despite the risk of infection, whereas in 2020 the city cancelled the annual St. Patrick’s Day parade at the onset of COVID–19. Like 2020, 1918 was also an election year for the midterms. However, by Election Day 1918, cases were declining in Chicago and the public’s inclination to social distance was lower, leading to little effect on voting.

While federal and state governments manage the pandemic today, in 1918 this control was in the hands of local municipalities. “The pandemic wasn’t a political football the way it is today. President [Woodrow] Wilson never publicly addressed it, and the federal government was not expected to play a significant role in individuals’ healthcare matters,” a 2020 Time magazine article said.

Schools also remained open. Unlike today, when classes can be conducted online, in-person schooling was the only way for students to receive a consistent education. However, unlike the risks many schools have had to grapple with when reopening this fall, in the 20th century public schools were broadly used as a way to monitor children’s health and so were already equipped with thorough systems of medical inspection.

At UChicago, in timeless fashion, students were more worried about falling behind on schoolwork than potentially contracting the flu. One issue of The Maroon reported, “Under the present regime it is difficult to miss classes and keep up with the work, but any student feeling at all unwell should stay away from gatherings of any sort.”

Although social distancing measures were not as strict as they are today, students were just as eager and even more insistent to return to normal activities. Athletics and dances were two areas where student reporters continually expressed their desire to resume and were outspoken in their attempts to convince others.

“There is hope that the Purdue game will be played next Saturday, as there are indications that the Chicago health department is considering lifting the ban on public gatherings,” The Maroon wrote in an article from October 25 (“Continued Rain Sends Football Men Indoors for Blackboard Drill”). “The likelihood of contracting the ‘flu’ at a game is not so great as in the cases of indoor meetings.”

Oftentimes, The Maroon’s coverage reflected that campus attitudes treated social distancing more as a momentary disturbance or even a nuisance to normal social life than a necessary measure. In one issue of The Maroon, the “Society Notes” (10/9/1918) section reported casually, “Autumn rushing is having a lapse while Phyllis and her young sister are quarantined with the ‘flu.’”

Frustration can be seen in various Maroon columns and opinion pieces. After all, there was no Zoom or social media to keep in touch in 1918; socializing came to a halt and students were eager to circumvent restrictions. One such column called The Campus Whistle (1/23/1920) reads, “The famous class of 1920 is next to give a party…. Wouldn’t it be funny if they postponed Settlement night on account of the flu? The answer is no.”

Students longed for liberation from the gathering restrictions and met any loosening of social distancing guidelines with great excitement. In November 1918, a period when cases were down, one student went so far as to write a poem (11/1/1918) on their joy: “The flu has flown,/ Now isn’t that nice./ Again we can go/ To the Edelweiss.”

The decline of the virus coincided with the end of the war and young soldiers returning to their schooling, a period that The Maroon titled in one January 1919 article as the “reconstruction of campus traditions” (“Begin Reconstruction of Campus Traditions,” 1/16/1919).

Students quickly resumed their social lives. The aforementioned article reported, a bit facetiously, that social groups on campus “are getting back into their ante-bellum tea-dancing habits.” Apparently, two laudable doctors who managed the pandemic were repurposed “to work the stretcher for any tea hounds who may succumb after stepping it all afternoon and night.” However, anxiety still remained among some; the coverage noted that the Reynolds Club president was still deciding whether or not to host a receiving line for fear of transmission. For roughly a year after the pandemic proper, flu cases continued to pop up in surges.

Today, experts warn Chicago is in the midst of a second wave of coronavirus as cases surge across the country. As with the influenza pandemic, we are likely in for a two-year-long haul of the coronavirus. In the meantime, we can all look forward to the day when we can return to the Edelweiss.