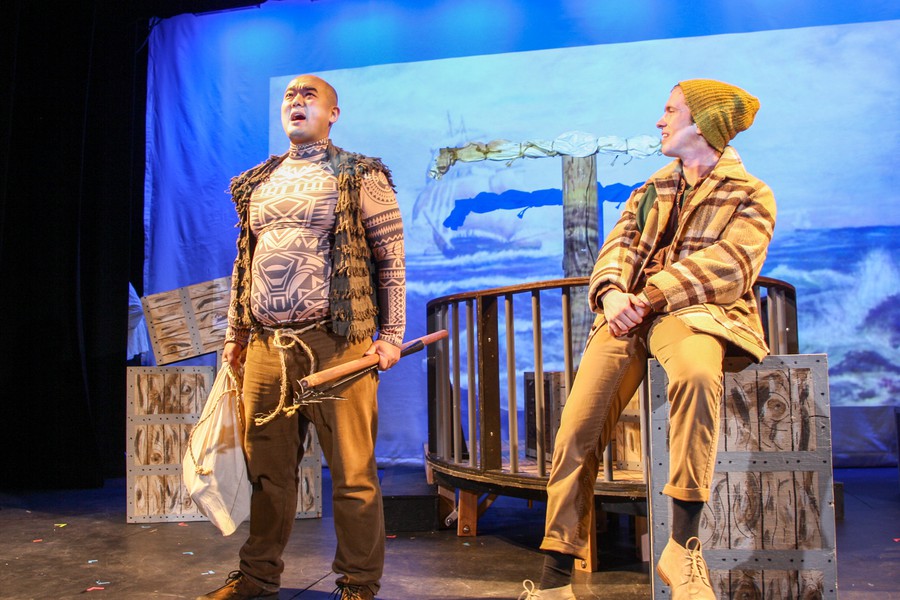 One of American literature’s most iconic opening lines also begins Moby Dick - A Musical at the Chicago Musical Theatre Festival. Directed by Jean Hardie, with book and lyrics by Ed Bryan and music by William Berry, the musical was initially staged in Spokane, Washington, before being brought to Chicago for this festival. Two UChicago students, Hope Campbell and Zander Galluppi, appear in the Chicago iteration of the show.

For those unfamiliar with the plot of Herman Melville’s sizable novel, this musical highlights key moments of the tome while attempting to broadly convey its general spirit. Ishmael, a sailor, signs on to work on the Pequod, a whaling ship captained by Ahab, who is searching for Moby Dick, the whale that had bitten off his leg. Along for the ride with Ishmael is Queequeg, a Polynesian harpooner. The two quickly become fast friends and stick together aboard the ship as Ishmael learns to be a whaler. Starbuck, the new first mate, frequently butts heads with Ahab as the captain drives the ship towards the whale, while Starbuck attempts to literally keep the ship afloat. Interspersed between the scenes aboard the boat, the townspeople (particularly the wives, girlfriends, and children of the sailors) make preparations for the voyage, then sing about how they miss the men aboard the ship. The musical concludes with Ishmael’s solitary return to Nantucket after the sinking of the Pequod.

With the given text, every actor in this show gave a great performance. Kyle Kite (Starbuck) and Nate Hall (Ishmael) in particular steal the show, both giving charismatic performances that translate well between the antiquated Melvillian language and the audience. A particular highlight of the performance is Chris Jowett’s Bulkington leading the sea shanty “Bedford Girls,” in a sweater reminiscent of Chris Evans’s in Knives Out. Conversely, Queequeg (Peter Ruger) was mildly disappointing. Mostly due to the writing, he is fairly flat (and speaks solely in monotone) throughout the musical. There was potential for his character to be a component of a larger exploration of race and racism throughout the show, but instead he is generalized as a vaguely Polynesian man with a tattooed bodysuit. His only indication of character growth is the advancement of his vocabulary from “broken” to standard English. The moment Ruger opened his mouth to sing, however, his entire presence shifted. With “To the Sea,” one of his duets with Ishmael, he delivered an enchanting performance that pulled me in, hook, line, and sinker. Indeed, the ensemble scenes aboard the Pequod were the highlights of the show: The camaraderie between the whalers as they belted out sea shanties lifted the stage’s energy.

Unfortunately, some of the flattest characters in the musical are the women of the town. Existing solely to intensify the power of the loss of the sailors, they have no character development beyond missing the whalers once they’re gone. “Where Are They,” the opener to the second act, served as a distraction from the central excitement of the show (the whalers aboard the Pequod), instead of any kind of poignant reminder that the men aboard the ship had ties back home in Nantucket. The women gave excellent performances, but, by virtue of how little material they had to work with, they were ultimately unmemorable. Overall, I feel that I missed out on the bulk of Moby Dick because the writers attempted to add so much to an already lengthy story.

Galluppi and Campbell both gave phenomenal performances: Galluppi as Bildad (a half-owner of the Pequod), Captain Gardiner of the Rachel, and a whaler aboard the Pequod; Campbell as Gail, one of the ladies of Nantucket. Galluppi deftly switched between characters and was particularly memorable as Captain Gardiner searching for his lost son. Campbell was a bubbly presence and lit up the stage when she was on it, but unfortunately she had so little stage time I felt I missed out on her full capabilities as an actor.

The physical set was incredible, especially considering the festival format of the show. The skeleton of a ship takes center stage, and wooden blocks generally form the rest of the set (besides Queequeg’s coffin, the only fully realistic portion of it). The versatile ship served not only as, well, a boat, but also as a pulpit, part of a pub, and more. Coupled with this fabulous design, the low-res PowerPoint that served as the projected background of each scene was disappointing. During one notable scene in the chase for Moby-Dick, the men were rowing on boats constructed out of the blocks as a blurry drawing of men aboard a whaling boat was projected in the background. The image distracted me from the more important scene happening in front of it, and I was chagrined for most of the rest of the show. Moreover, some of the staging was questionable: It was difficult to see Ishmael adrift on Queequeg’s coffin, and parts of the sequences on the ship were set so far upstage that they were challenging to understand. There were some incongruencies in the accents of the sailors, as well: It would be fine if it were acknowledged that the whalers came from all over the world, but they all claim to be born-and-bred Nantucketers.

For this audience member, Ishmael was my Moby Dick. Adrift in an odd sea of both Melvillian and modern English coupled with a large novel, I clung to his narrative interludes to understand the plot. When he disappeared for most of Act 2, I had trouble following the story without the help of the summary and scene list in the playbill. Had the story been cleaned up and kept consistent linguistically and plot-wise, I would not have spent good portions of the show trying to figure out what was going on by looking in my program.

Regarding the show as a whole, I cannot excuse the racism and misogyny present in the construction of this musical. Had Queequeg not been reduced to a comedic bit part, or had the women passed the Bechdel test, this show could have been an interesting exploration of the relationships between race and gender, as well as familial connection, in this classic text. Instead of being a deeply unifying piece, this show was a messy conglomeration of ideas that weren’t fully fleshed out. Perhaps a perfect Moby Dick musical is my own white whale: an ideal I can chase but never fully reach thanks to the narrative structure of the original text.

Moby Dick - A Musical is the first of a series about the ongoing Chicago Music Theatre Festival. Watch this space for more reviews, as well as an exclusive interview with UChicago alumni involved in some of the productions!