Written more than 20 years ago, Bug seems especially current and poignant in its current staging at the Steppenwolf. 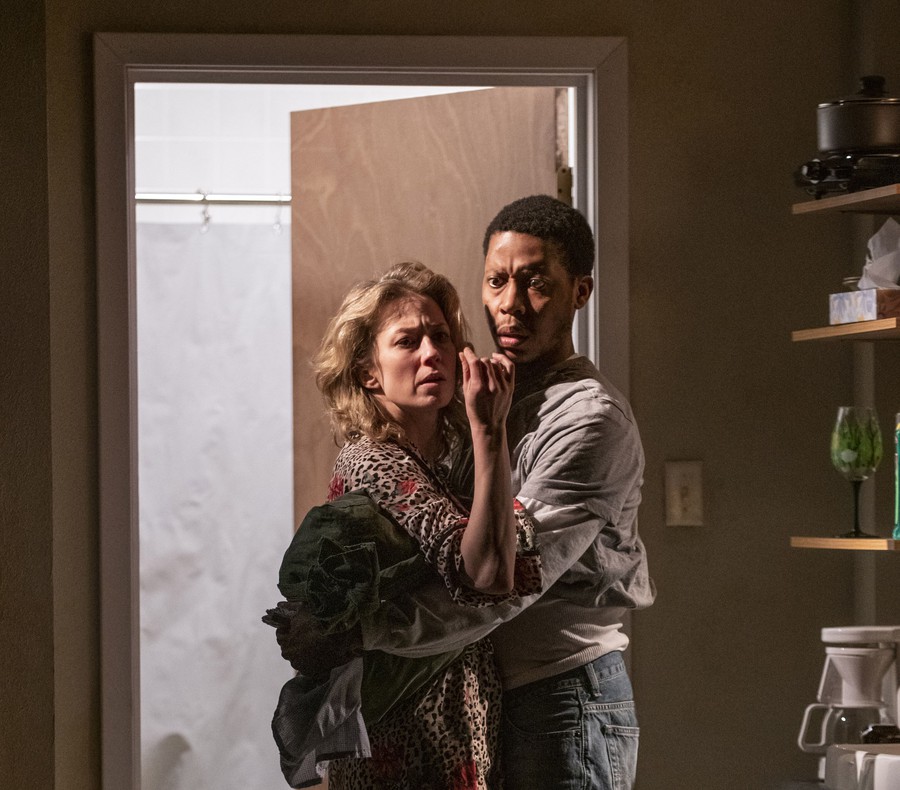 We like to think of this point in time and the technology we interface with as special—the way things are now are unlike they have ever been in any other moment. This is especially true about technology—from jokes about the FBI watching us through our MacBook cameras to Amazon Alexa, surveillance is ever-present and historically contingent. But Tracy Letts knew in 1996 that surveillance had been at the front of our minds for quite some time. The collision of his second play, Bug, with our current moment provides an explosive look into identity, surveillance, conspiracy, and romance.

Bug’s programming at Steppenwolf is a retroactive addition to a long history of collaboration between Letts and the city’s most prominent off-Loop theater. Though first performed in 1996, Letts’s writing and commentary feel especially prescient in the internet age, and the text soars on Steppenwolf’s stage for the first time. The text is both uniquely dark and blisteringly funny, and it operates like a well-oiled machine; a deep thread of suspense lasts throughout the play, and jaw-dropping moments are aplenty.

All of Bug’s action takes place in the Oklahoma motel room Agnes (Carrie Coon) calls home. She spends her days snorting or smoking cocaine, mixing vodka Cokes in between her bartending shifts, and answering her motel phone only to hear her abusive ex-boyfriend Joe (Steve Key) heavily breathing on the other end. Her lesbian best friend R.C., played by the ever-delightful Jennifer Engstrom, brings home Peter (Namir Smallwood). When Peter reveals he has nowhere to call home, Agnes offers him a spot sleeping on her floor, and the rest is history.

Peter nurses Agnes to health after an encounter with Joe, and by their second night together, codependence emerges—and so do bugs. Peter claims they are everywhere, too small to see without a keen eye. And by the end of the night, Agnes sees them too. Peter reveals to her that he thinks the bugs are the result of an experiment done on him during his time as a soldier in the Gulf War. The rest of the show is dedicated to the duo trying to root out the full cause of the bugs and eradicate them from the room, without letting the government discover Peter’s location.

Carrie Coon’s performance, her first as a Steppenwolf ensemble member, is a tour de force. Agnes’s excitement in her relationship with Peter and her history of trauma are visceral, constantly feeding one another and filling the room with her palpable need to feel something and escape the monotony of her motel room life. Smallwood is equally terrific, serving as an unreliable ambassador of Peter’s own history as he gets more and more desperate to free himself from the bugs.

Steppenwolf Artistic Director Anna Shapiro notes that this is the first time the piece has been performed without an all-white cast—Smallwood is Black. She is correct when she notes that Namir Smallwood’s casting adds an extra layer of history and meaning to the text, pointing to how surveillance and control have been particularly applied to both Black communities and veterans, whose skepticism is then written off as madness. Both characters deftly slip between the intense specificity of their own situation and broader gestures to questions of surveillance, conspiracy, and identity—Coon embodies the oft-talked about disenfranchised middle America, while still breathing life into Agnes herself.

For all its symbolism, Bug is not only worth seeing for its deep dive into the surveillance state; perhaps more importantly, it is exquisite theater. It is a deservingly big-budget production of a well-written and well-cast play, powerfully directed and designed. There’s just nothing quite like it.

Bug runs through March 15 at Steppenwolf Theater. Tickets range from $15 to $85.