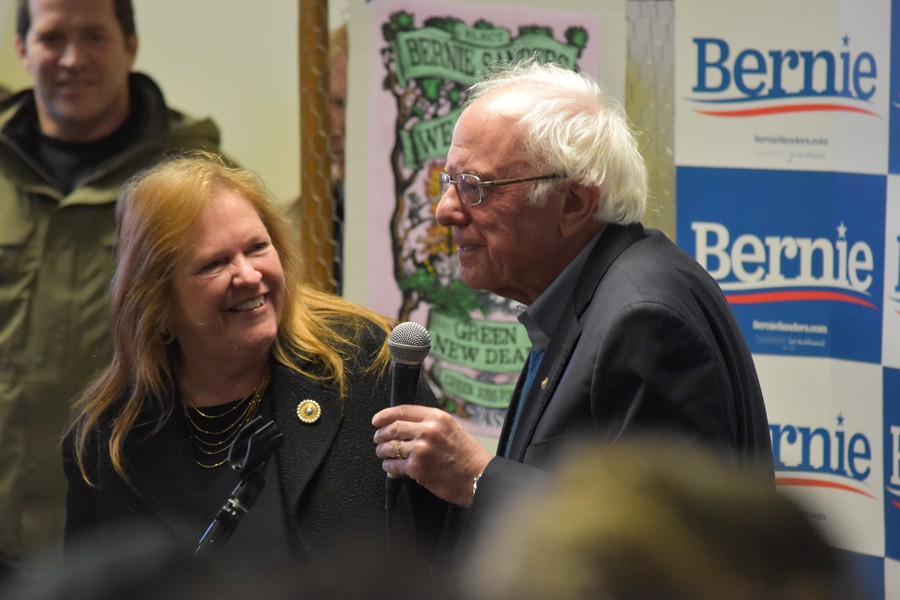 Senator Sanders takes the mic in Iowa City beside his wife, Jane.

IOWA CITY, Iowa: Vermont Senator Bernie Sanders (A.B. ’64) kicked off a canvas launch at his campaign’s Iowa City field office on Sunday afternoon. After the event, a crowd of an estimated 200 supporters dispersed to knock doors around Iowa City.

The office’s back room, where Sanders was scheduled to speak, filled to capacity well before the candidate arrived. Musician Lia Rose warmed up the waiting crowd with a rendition of Bob Dylan’s “The Times They Are a-Changin’ ” from a viral fan-made video of Sanders.

Supporters were almost as excited to see Nina Turner, Sanders’ campaign cochair, as they were to see Sanders, chanting her name as she entered and cheering throughout her speech. Turner emphasized the diversity of perspectives within the campaign, calling it a “rainbow mosaic.”

“Let’s invite our friends and our frenemies to this party,” Turner said. “Isn’t it wonderful that in this people-powered, multi-generational, multi-gendered, multi-racial movement we are in that we are saying to this nation and to the world that we want for others what we want for ourselves.”

Turner argued against the idea that Sanders is not electable due to the perception of his policies as radical and said that those criticizing the Senator’s proposals were not well-informed about the realities of daily American life.

“People in this country wax poetic on national TV and talk about how Senator Sanders can’t win or [how] he is a little too radical,” Turner said. “See, when you have a castle view, baby, you don’t understand what’s going on in the streets. It is time to elect a president who has a street view.”

Turner touted Sanders’s progressive record, dating back to his college activism protesting segregation in Chicago schools. Her mention of the University of Chicago drew loud cheers from the crowd, which included members of UChicago For Bernie.

There was no need for Turner to introduce Sanders: his arrival was immediately apparent from the roar of clapping and cheering that rose from the crowd when he walked in. Sanders focused on the importance of boosting historically low voter-turnout rates among youth and of convincing disenchanted Iowans to get involved.

“Just seeing everyone’s energy and enthusiasm and all these people are now ready to go knock doors, that’s what I think is unique about Bernie,” Ali said. “Nobody is mobilizing people to that degree.”

Sanders concluded his speech in Iowa City by underlining the centrality of volunteers to his campaign.

“We talk about ‘us, not me,’ ” Sanders said. “That’s not only a good bumper sticker, which it is. It is a profound political and philosophical statement.”