In line with a broader trend of ignoring students, administrators failed to meaningfully involve undergrads in the recently announced, major changes to the academic calendar. 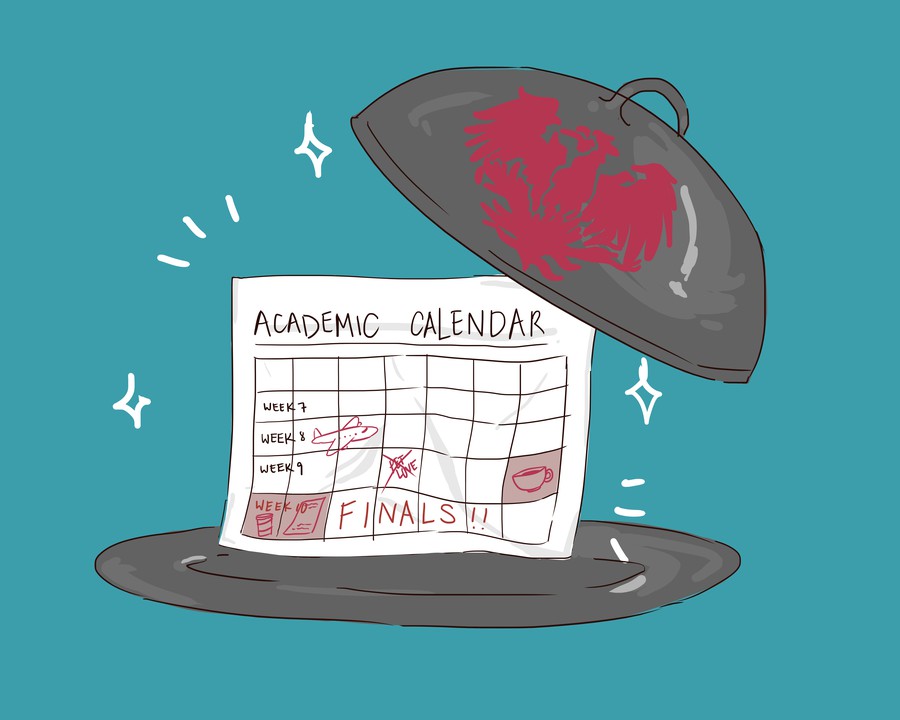 Recently, Provost Ka Yee Lee announced several changes to the University’s academic calendar. The adjustments include shorter quarters with instructional periods cut to nine weeks, a week-long Thanksgiving break, shortened reading periods, a three-week September term, and an earlier end to spring quarter. These are among other suggestions outlined in a report by the Committee to Review the Academic Calendar, which was composed of select faculty, academic staff, and students.

Students were consulted remarkably little leading up to Lee’s announcement.

For one, the report includes “a request for a defined period of public comments and conversations with deans, faculty members, lecturers, students, and academic staff during the Autumn quarter of 2019.”

This call was egregiously ignored: No public comment process ever occurred. Furthermore, as a University spokesperson confirmed to The Maroon, only various faculty groups—and not students—were formally consulted in meetings last quarter.

Additionally, the committee included only two undergraduate students and one graduate student, all of whom graduated in 2019. The committee’s report does not say why these individuals were selected as the only student voices on the topic.

Students must be given substantive say in decisions that so drastically impact student well-being. Had the administration consulted more than two undergraduates, the proposed changes—which drew a flurry of instant student critique—might have better addressed College students’ needs.

As campus activism has repeatedly shown, there is no shortage of student desire to be more involved in administrative decisions. There was also certainly enough time, in the drafting of this report, to consult students: The committee was formed in January 2019.

When the committee began meeting with University stakeholders, they held meetings with only one undergraduate group, the Maroon Key Society. The society, which consists of third- and fourth-years handpicked by faculty and administrators, does not by itself adequately represent the broader student body, however.

Notably, the committee did not meet with elected student representatives from the College during the report’s drafting. When asked by The Maroon, a University spokesperson said only that the Graduate Council, the elected group for graduate students, was consulted in spring 2019.

The lack of undergraduate input on these recommendations made itself clear within hours of Lee’s announcement.

The provost’s email did not offer any forum for University members to raise questions or concerns, leaving students to voice their feedback on informal, independent platforms. UChicago Memes for Theoretical Midwest Teens and UChicago Secrets, two Facebook groups commonly used by students, flooded with posts critiquing the new calendar. In a recent Maroon column, a student called for the Office of the Provost to devote time toward addressing student feedback before the new calendar is implemented in autumn 2021.

The University has established a pattern of ignoring student voices in matters that directly concern students. This trend is reflected in the 2018 announcement of Woodlawn Residential Commons, for instance, as well as the more recent addition of Latin honors—made with no public notice.

Several problems with the old calendar could have been addressed more effectively had students been better included in its revision.

Chief among the issues with the new calendar is the reduced instructional time. This shortening of the quarter will disproportionately affect STEM students, who will either be forced to cram content into a shorter time frame or leave foundational courses with gaping holes in their technical knowledge. The fact that the report does not mention a decrease in tuition, since the academic year will be substantially reduced, is puzzling—particularly given UChicago’s soaring tuition rate and cost of attendance, which is the highest in the country.

The report’s attempt to brand the new reading period as three days is also misleading: The University isn’t expanding the current Thursday and Friday reading period. Instead, it is including Saturday and Sunday in the new three-day count, Saturday to Monday, to disguise the fact that it is shaving off a crucial study day.

Meanwhile, the addition of a three-week September term comes with significant, and as yet unaddressed, financial considerations. Since the report doesn’t specify whether or not the September term will be included in autumn tuition or require an additional expense, it is unclear to what extent this additional term will be a viable option for all students.

Finally, the new calendar’s proposed week-long Thanksgiving break has its own sets of pros and cons. The longer break may give students more time to recharge and prepare for finals, but it poses a challenge to international students and others who may not be able to return home during the week. Especially given that the committee’s report does not specify whether all dorms, dining halls, and other facilities will be open for students during this time, it is unclear what portion of UChicago students will benefit from the lengthened holiday.

This is not to say that all of the changes to the academic calendar are bad. Some recommendations are admirable, like the intent to end the academic year by June 1 so that students can pursue more varied internships and other summer opportunities. The report’s mention of potentially reviving part-time status is also commendable, although it’s unclear whether this discussion will actually lead to a change in policy.

The University should, however, have displayed more transparency throughout the process. Several of the new calendar’s problems flow directly from a lack of meaningful student consultation. Moreover, student engagement is worth striving for in its own right. In the future, when making large-scale administrative changes, the University must include students—not just through one-off, semi-private meetings and symbolic collaborations, but through serious attempts to seek out and heed student feedback.

Senior News reporter Adyant Kanakamedala recused himself from this editorial due to his involvement in related reporting.