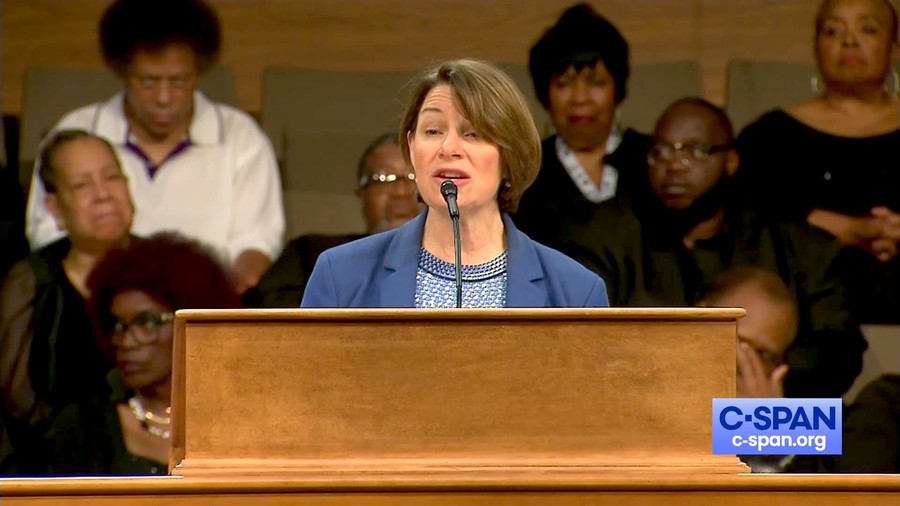 Minnesota Senator and Law School alumna Amy Klobuchar (J.D. ’85) dropped out of the race for the Democratic presidential nomination Monday afternoon. In her exit speech, she endorsed Joe Biden.

Klobuchar suspended her presidential campaign right on the heels of former South Bend, Indiana mayor Pete Buttigieg, who had dropped out just the night before, and businessman Tom Steyer, who had staked his candidacy on winning South Carolina’s 56-percent African-American Democratic electorate. Biden dominated South Carolina, earning 48 percent of votes in Saturday’s election.

Klobuchar struggled to gain momentum in the early states. She had a surprising third-place finish in the New Hampshire primary, in which she took 20 percent of the vote, but only took fifth place in Iowa and sixth place in Nevada and South Carolina.

The wave of dropouts represents a significant consolidation of the moderate wing of the Democratic party in an effort to slow Vermont Senator Bernie Sanders’s (A.B. ’64) momentum from early states into Super Tuesday. So far, Sanders has won or taken second place in every nominating contest.

Klobuchar, currently serving her third term in the Senate, staked her campaign on a pragmatic approach grounded in the Midwest in an attempt to appeal to disillusioned voters who had voted for President Donald Trump in 2016. She frequently contrasted herself with the more radical wing of the Democratic party, represented by Sanders and Massachusetts Senator Elizabeth Warren, saying that their ambitious plans like Medicare for All and free public college were “pipe dreams” and that she would prefer to propose plans she argued were more likely to come to fruition.

A common catchphrase for Klobuchar was “I’ve won every race, every place, every time,” referring to her string of successful down-ballot races for state prosecutor and Senator in both red and blue districts. This statement often factored into her “electability” pitch to a party whose priority this election cycle has centered as much on removing the president as on any specific policy idea.

Other policies Klobuchar often touted included her plan to expand rural broadband and invest in rural infrastructure and transport.

At UChicago, Klobuchar did not have a single supporter turn out for the UC Dems’ January “mock-us,” in which students simulated a caucus in the manner of the Iowa and Nevada caucuses. There was no organized campus candidate group supporting Klobuchar either, as there were for Sanders, Warren, and Buttigieg.