Some businesses on 53rd and 55th Streets had windows smashed and merchandise stolen on Saturday night and closed early on Sunday to prevent more thefts and damage. 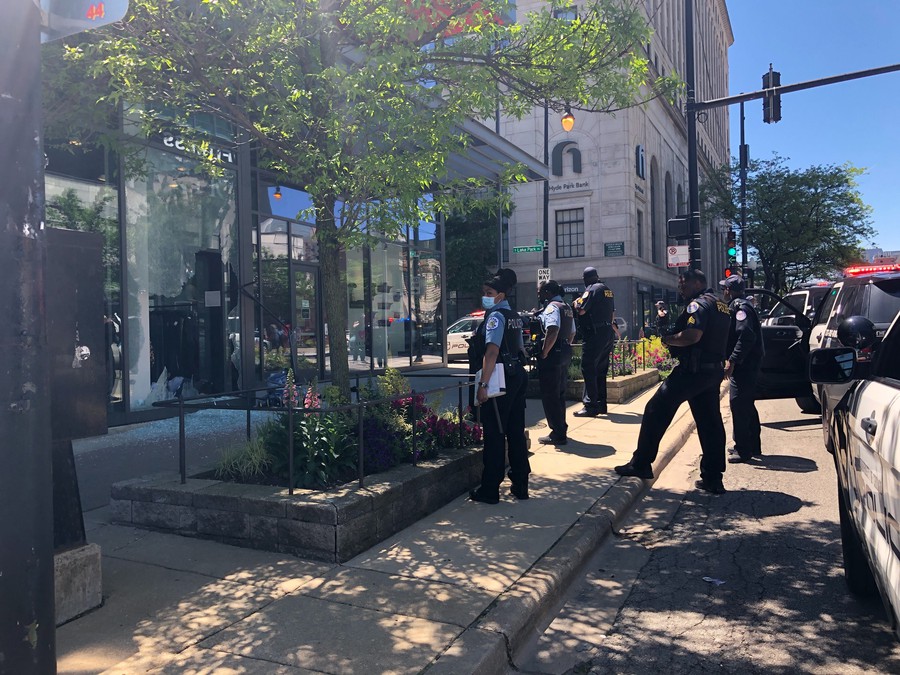 Police officers gather around a smashed window at Akira on 53rd street.

After a week of mounting protests across the country in response to the murder of George Floyd by a Minneapolis police officer, Hyde Park businesses evaluated damage and closed early, anticipating window-smashing Sunday night after several stores had their windows broken and items taken on Saturday.

Jonathan Swain, the proprietor of Kimbark, said that burglars had smashed windows, taken some high-end liquor, and destroyed cash registers and computers. He did not yet know the cost of the damage.

For Swain and other local business owners, the cost of potential damage will be much higher than it is for national brands like Xfinity. Kimbark Beverage had posted large signs on its windows reading, “BLACK OWNED; SERVING OUR COMMUNITY; PLEASE DON’T.”

“I’ve talked to other business owners in our plaza, and we are all concerned because we’re community folks, and we support the community with our businesses,” Swain said. “We hire from the community. And so when folks come and attempt to burglarize and vandalize us, it hurts a lot.”

However, Swain also noted that he thought his store was a victim of opportunistic thieving “under the guise of civil unrest.” He chalked the damage of the protests up to generations’ worth of financial disadvantages in the Black community.

“We are experiencing, even with people that burglarized us, a lot of that is the fruit of significant disinvestment for years,” Swain said.

He called Floyd and Taylor’s deaths “the powder keg that set it all off.”

“This has been around for a long time. While I don’t excuse it, in some ways, I understand it,” he said.

Mohammed Court, 18, was standing in front of his father’s general store on 53rd Street. They were preparing to close and board up the store, Court said, in response to a threat they had received earlier that day.

“Some guy came by. He wanted to return something, and we wouldn’t give it to him because the item was torn up and already open,” Court said. “And before he left, he said, ‘I’m going to make sure these motherfuckers break your windows tonight.’ We’re planning to barricade up the place.”

Jimmy Johnson, a manager at Nando’s, began to close down the restaurant in response to the broken window at Akira.

“We were right next to T-Mobile, which got hit last night. And now that I’m just seeing in broad daylight, Akira, about a block away, I fear for our customers and their safety, and for the safety of our employees as well. The safety of our guests and our employees comes first,” Johnson said.

“I don’t want to take any risks and have any of my crew get injured,” Bennouna said.

Police began advising businesses to close for the day at about 1:30 p.m. Fewer than 24 hours after an email from Provost Ka Yee Lee expressed “solidarity and for a strengthened commitment to care for each other and work to improve our community, our city and our nation,” University members received a security alert about increased UCPD and CPD presence in the area in the wake of damage to 53rd and 55th Street businesses.