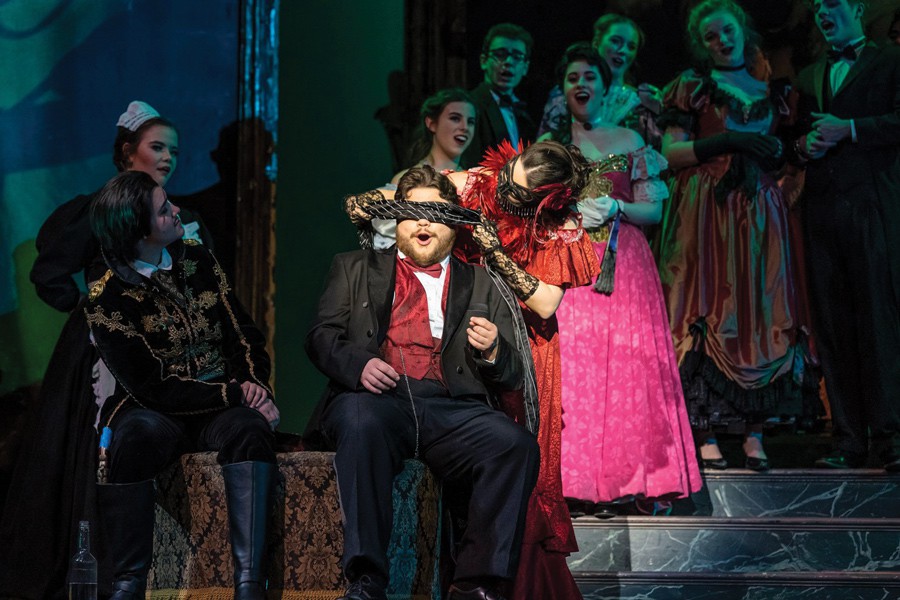 The revised libretto—along with the cast’s brilliant slapstick sense of humor—had the audience laughing hysterically.

While student opera productions often feel a little bit low-budget and amateurish, Northwestern Bienen’s March production of Strauss II’s Die Fledermaus was anything but. Conducted expertly by Nicholas Koo and directed with incredible vision from Joachim Schamberger, Fledermaus had the audience enraptured from the first note of the overture until the curtain call.

Die Fledermaus is a late 19th-century operetta, composed by Johann Strauss II, a renowned Viennese composer known as the King of the Waltz. As an operetta, Fledermaus is a combination of spoken dialog and singing with a more comedic plot and lighter music than usual opera.

Taking the levity of Fledermaus in stride, director Schamberger—also the director of the Northwestern Opera Theater—translated the spoken dialog of the opera from the original German (of which he is a native speaker) to English. Full of sly commentary, with such memorable lines as, “Looks like someone must have finally built the wall,” “Don’t worry, it’s alternative facts,” and “Batman!” the revised libretto—along with the cast’s brilliant slapstick sense of humor—had the audience laughing hysterically.

“The goal was just to make it relatable for the audience—especially because opera can be somewhat inaccessible to people,” Northwestern Bienen second-year and chorus member Grace Fisher said. “Not all of us necessarily agreed with that choice, but I think that that English dialogue and like some of the political jokes and stuff helped me, made it more fun for the audience.”

Further aiding the success of the performance was its backbone: conductor Nicholas Koo and the orchestra, both of whom were magnificent.

Fledermaus’s score—a textbook example of Viennese operetta—is beautifully lush and decadent, though it can also become unwieldy for young conductors. Richly orchestrated, oh-so-easily hummable, and with so many moving parts, the score can feel disjointed and unbalanced, with the runs of the overture breaking up the unity of the orchestra like a tempest breaking over a riverboat without a firm hand to guide it.

Fortunately, Koo had a firm grip on the rudder, and the result was splendid. His lithe interpretation was in no small part aided by the lively dexterity of his orchestra. The violins, running up and down a ladder of a score in the overture were exquisitely limber, though the horns left some precision to be desired.

On top of the music, Schamberger’s direction and a wonderful cast truly allowed for Fledermaus to shine. Though Northwestern does not often do period productions, the period set—owned by the Virginia Opera Theater—combined with fantastic costumes and hair and makeup done by stylists from the Lyric Opera made Fledermaus look and feel first-class.

Of course, an opera is nothing without its cast, and luckily, this cast (one of two for the production) was absolutely amazing. Of particular note were Adele and Fledermaus himself, played by Northwestern third-year Megan Fleischmann and masters student Walter Aldrich, alumni of the Aspen Music Festival and School, respectively. Aldrich, who practically waltzed onto the stage along with the overture, had a brilliant stage presence and comedic timing that was matched by his voice. With the color and clarity of a broadsword of crystal, Aldrich was the center of attention whenever he was on stage.

That is, unless he shared a scene with Fleischmann, who managed to steal the stage in the same way that her character, Adele, steals the spotlight of an opera singer whom she knocks out (in a rather hilarious manner, which Fleischmann absolutely nailed). Despite her relatively young age, Fleischmann's voice is rich and powerful, yet still enormously playful. Adele’s famous solo aria, “Mein Herr Marquis,” was splendid, and though the tempo was perhaps a bit slower than usual, Fleischmann’s singing and Koo’s fantastic conducting made it an absolute highlight of the evening.

Rounding out the performance was the stellar chorus. No operetta is complete without a lively, raucous chorus, and this one was no different. Their sound was as lush and rich as the score, and their playful acting (each member of the chorus had a little independent story in the large ensemble pieces) made them even more hilarious and a joy to watch.

Even though COVID-19 has the opera world on pause for the foreseeable future, I cannot wait to see what Bienen puts on next!

This review was for the Sunday matinee performance of Northwestern’s Die Fledermaus, performed on March 1, 2020. Its publication has been delayed due to the COVID-19 pandemic.