Yiran Fan, who was in the process of obtaining his phD, was warmly remembered by his friends and peers. 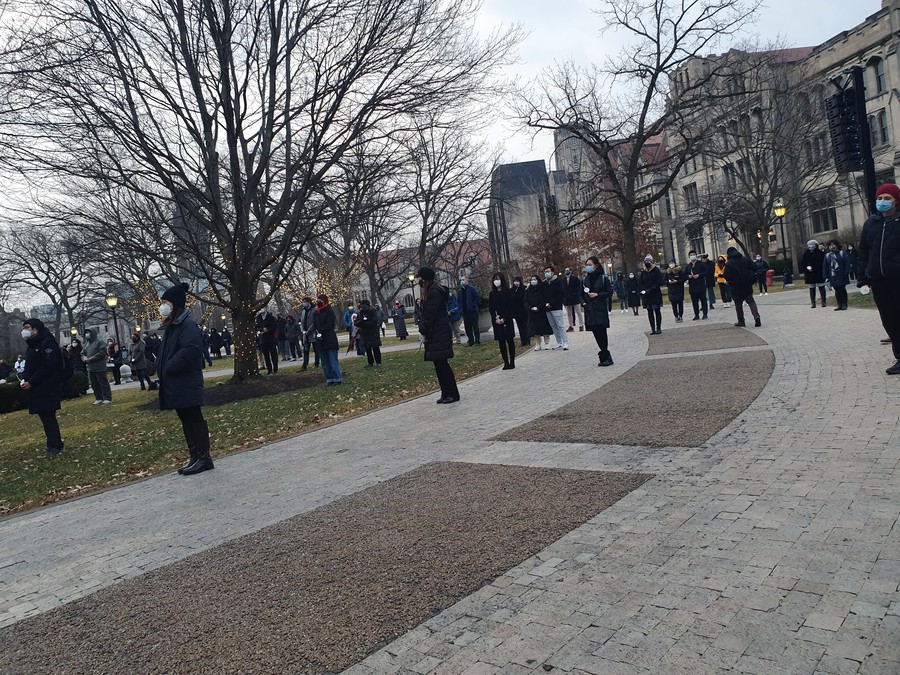 Mourners gather at the vigil of Yiran Fan.

Mourners, masked and socially distanced, filled the main quadrangle on the afternoon of January 14 as they listened to the personal accounts of those who had known Yiran Fan, a University student who was killed on Saturday, January 9.

Fan was a Ph.D. student in a joint program between the Booth School of Business and the Department of Economics. He joined the University in 2014 as a master's student after earning his bachelor's degree at Peking University and his first master's degree at the University of Cambridge. After Fan earned his A.M. at the University of Chicago in 2015, he worked at the Fama-Miller Center for Research in Finance. In 2017, he was admitted to the joint Ph.D. program in financial economics. He was in his fourth year at the time of his death and was preparing to propose his dissertation later this year.

Economics Ph.D. candidate Lun Li described meeting Fan. “In September of 2015, I walked into the Chinese Drama Club. I immediately noticed the new director [Fan]. He talked really fast and passionately, with a very recognizable voice and a great sense of humor.” Over the years, Li said, he often visited Fan at his office and their friendship grew.

“One day, Yiran texted me and said he got an offer from the joint Ph.D. program,” Li said. “I knew how hard he had worked for it and I was sincerely excited for my friend.”

Li recounted celebrating Chinese New Year in 2018 with Fan and a group of their friends in his apartment. “Last night, I was sitting alone in that apartment, thinking about the great time we had,” said Li. “I was hit by a sudden wave of sadness when I realized I could not talk to my friend anymore. But then I said to myself, ‘I was fortunate to have known Yiran for six years of my life, and I’ll remember him for the rest of my lifetime.’ I hope you will remember him as well.”

Zhiguo He, a finance professor at the Booth School of Business, was someone with whom Fan had worked closely. He spoke highly of Fan’s academic abilities. “There was no need to tell him how to do something. I just told him what I wanted to accomplish,” he said.

He also described the first time he had taken Fan to dinner and recalled his drive, encapsulated in a saying of Fan’s: 一分耕耘不一定有一分收获，但是十分耕耘就一定有一分收获. Translated, the saying means, “Some effort won’t necessarily yield some reward, but strong effort will definitely yield more than nothing.”

Fan “took my second-year Ph.D. class. He deserved an A-plus, but just because here we usually don’t give A-pluses, we decided to give him an A.” He paused. “Now I regret it.”

Katie Tian (M.B.A. ’20) met Fan while she was president of the Chinese Drama Club. “Yiran had a romantic heart as well as a logical brain,” Tian said. “He once told the three actors to stand in a 150-degree isosceles triangle to evoke the tension between the characters.”

After Fan was admitted as a Ph.D. student, his heightened workload meant that he was unable to devote as much time to the Chinese Drama Club. “I texted him every semester when we were considering a new show for him to direct,” Tian said. “He would politely reject me and chat about how he was stressed about this Ph.D. qualifying exam.”

Fan still returned to the club as often as he could to help out with auditions or rehearsals, but he never came back as a full director, Tian said. “The last time I met him, it was at Winter Garden. I told him, ‘We need a director again, we need you back!’ and he said, ‘Next time.’”

The University has established a fund in Fan’s memory to support students in the joint program in which he was enrolled. Donations may be given here. The UChicago Beijing Alumni Association has organized a fundraiser for Fan’s family, as has Professor He. Personal remembrances can be expressed here, and a compilation will be presented to Fan’s family.