I KNEW I Smelled a Rat!: A Review of "Ratatouille: The TikTok Musical" 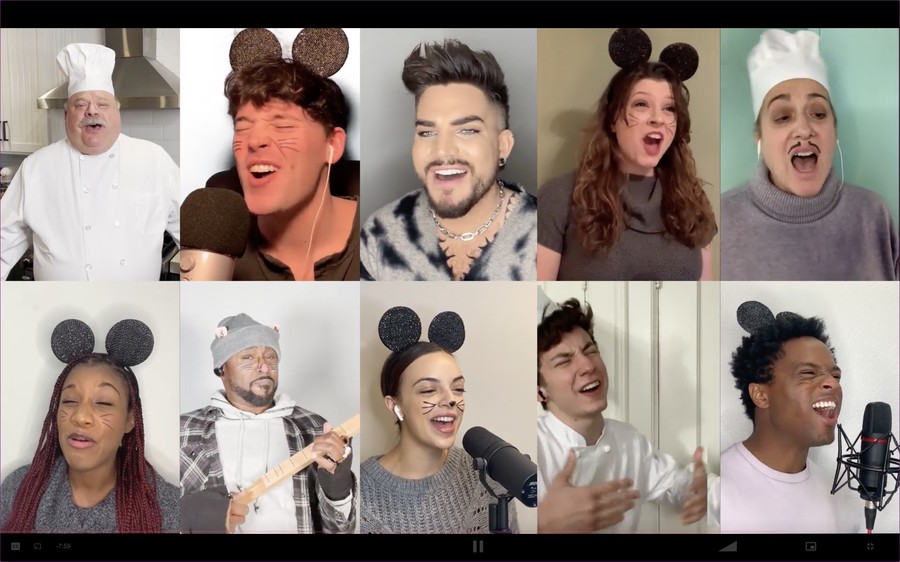 Cast members of "Ratatouille: The TikTok Musical" belt out the rousing finale.

By Gabi Garcia   and Alina Kim

As all good things do, it probably started as a meme.

On August 10, 2020, TikTok user Emily Jacobsen (@e_jaccs) posted a short musical snippet titled “Ode to Remy” on the social media platform, featuring her pitch-altered voice and a slideshow of Pixar’s Ratatouille’s star rat Remy. From there, other TikTok accounts expanded on her viral clip, creating theatrical personas for Remy’s brother Emile; no-nonsense chef Colette; and the bumbling son of Chef Gusteau, Linguini. Some fans added dance numbers, showed off their individual renditions of rat costumes, or even composed an orchestration of Jacobsen’s ode, in the case of Daniel Mertzlufft (@danieljmertzlufft). The rest is history: with Disney’s blessing (the musical was permitted to air online for 72 hours), director Lucy Moss (Broadway’s Six) and musical adapters Michael Breslin and Patrick Foley signing on, and 11 TikTok songwriters composing seven original songs, an official show was released starting at $5 a ticket. The musical would go on to raise over $2 million for The Actors Fund.

Ratatouille: The TikTok Musical is a testament to the power of social media’s virality, with a singular post’s proliferation ironically paralleling the worldwide spread of another contagious entity. In times of bleakness and separation, the Ratatouille musical is the very sort of lighthearted virtual entertainment we need, its utter ridiculousness and underlying message of hope and resilience in the most uncertain of situations a good enough reason to crack a smile.

One of the true joys of the show comes from its all-star cast: Broadway veterans like André De Shields (Anton Ego), and Mary Testa (Chef Skinner) joined younger Broadway actors like Ashley Park (Colette), and Andrew Barth Feldman (Alfredo Linguini), along with musical superstar Adam Lambert (Emile), and television and Broadway star Tituss Burgess (Remy). In addition, the musical was produced by Jeremy O. Harris, the Tony Award-nominated playwright of Slave Play, and accompanied by the 20-piece, all women-identifying and majority women-of-color orchestral collective The Broadway Sinfonietta. Throughout the performance, we were joyfully surprised by star appearance after star appearance: the entire Broadway cast of Six performed backup vocals and dancing for Lambert’s stellar performance of “Rat’s Way of Life,” and off-Broadway (and theatrical social media) favorites Natalie Walker and Larry Owens appeared briefly as reporters for various European newspapers. 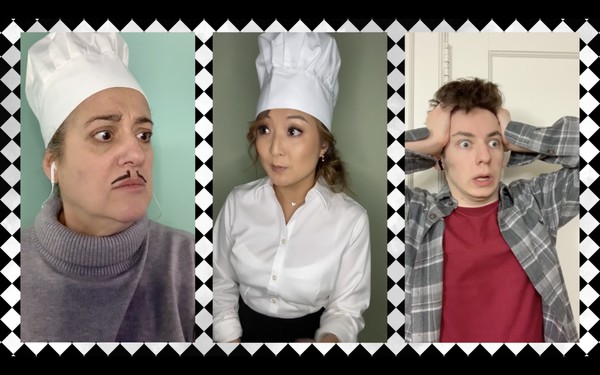 Ratatouille: The TikTok Musical featured smaller nods to musical theatre for more intrepid thespians in the audience. One memorable thirty-second sequence in “Anyone Can Cook” included references to Sweeney Todd, A Chorus Line, and Cats: “Rat-ical songs for rat-ical rats” was not something we expected to hear immediately after a massive, Chorus Line-style crescendo, but we were into it. The other major Easter egg was actually in the casting of the musical itself. Mabel, the old, Broadway-obsessed woman who chases Remy and Emile out of her kitchen (and into the sewer?) was played by Priscilla Lopez, who created the role of Diana in A Chorus Line. She begins the chase by singing a clever parody of “What I Did for Love,” Diana’s song in A Chorus Line. Additionally, in a nod to director Lucy Moss, at one point in the show, Remy sings, “Listen up, let me tell you a story,” an iconic line from Six.

We’d like to take a moment to applaud the casting director of this musical––we could not have imagined a better cast for Ratatouille: The TikTok Musical. Feldman, best known as one of the winners of the 2018 Jimmy Awards and Broadway’s youngest Evan Hansen to date, absolutely nailed his performance as Linguini, capturing the perfect blend of characteristics for our favorite awkward noodle man. His casting was no accident: he performed “Anyone Can Cook (Reprise)” in its original TikTok because he was friends with composer Nathan Fosbinder. Park, known recently for her performance as Gretchen Wieners in Mean Girls: The Musical, knocked it out of the park as Colette. Feldman noted on an Instagram Live that Park worked with a dialect coach to perfect her French accent specifically for this role, which paid off enormously, especially in the number “Kitchen Tango,” in which she raps cooking instructions in an impeccable accent without breaking a sweat. Testa’s Chef Skinner was a delight. Despite (obviously) not being a tiny Frenchman, she drew a fake mustache on her face and inhabited the character so well we forgot any evidence to the contrary. And Brady’s Django was, perhaps, the most anatomically correct rat—his detailed makeup and costume elevated his performance of “Trash is Our Treasure” even further, encouraging us to believe in his wisdom and expertise as an older rat. We can’t forget De Shields and his incredible Anton Ego: De Shields brings the precision for which he is known to his performance of our favorite grouchy food critic, making Ego’s revelation from the ratatouille he’s served that much more powerful. Finally, Joy Woods and JJ Niemann brought rat-ical energy to the show in their two-person dance ensemble. 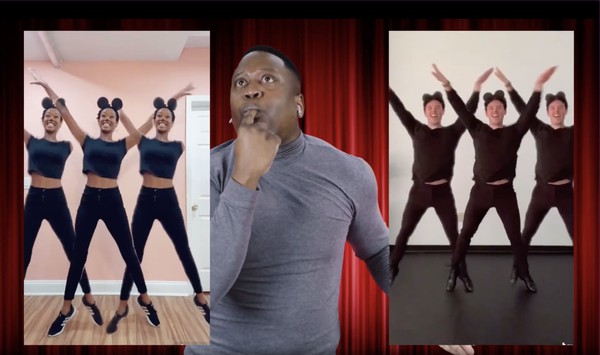 Remy (Tituss Burgess) tries his cooking as Joy Woods and JJ Niemann use TikTok filters to provide a full ensemble of background dancers.

While somewhat unfair to criticize a theatre production put together in a span of mere weeks, in the spirit of Anton Ego, we mustn’t pardon the flaws. Perhaps the standout pitfall comes from Burgess’s (Remy) fast-paced narration: it felt like audience members had to already possess knowledge of the plotline of the original Pixar film to fully grasp the musical’s storytelling. Burgess’s Remy was forced, more often than not, to quickly brush over major movie events, especially the Colette-Linguini romance (which was made more awkward by the massive age gap between the actors playing both roles) and Gusteau’s chefs resigning after Remy’s revelation. The rapid recap left us pausing to recall specific moments from the 2007 film before pinpointing where exactly in the storyline we were located. While we feel the character-driven focus was appropriate to the TikTok-esque production, the musical ultimately suffered by glossing over these important movie moments via dialogue in favor of a short production length.

The TikTok format of the musical certainly pays a cute tribute to the signature skit style of the social media platform’s users (the TikTok filters being quite a special treat), but by the fin, we were left with no nostalgic pining for the Parisian environment or Remy’s obsession with the artistry of food––two of the most crucial elements of the original Ratatouille. In the movie, Remy glorifies Paris’s beauty, absorbing its bustling culture and mouthwatering cuisine with wide-eyed wonder, literally showing us his visualization of food flavor through pulsing lights and French-style music. The musical, however, does not live up to its predecessor in this aspect: mostly recorded with gray backgrounds, save for Kevin Chamberlin singing in his own kitchen, it withdraws from both France and food alike. Did we even get to see ratatouille or Linguini’s botched (and later fixed) soup? The only reminder we have of Remy’s location is a reference to the Eiffel Tower in a digital background. Perhaps if the production utilized more of this feature—in fact, TikTok’s many filters include inserted digital backgrounds—we would have felt more situated within the three-star culinary destination at the heart of Paris.

Beyond all the glitter and glitz, Ratatouille: The TikTok Musical served a greater purpose to many members of the theatrical community. Thousands of theater workers have been unemployed since March due to the COVID-19 pandemic. But thanks to Seaview Productions, every contributor (including actors and designers) to Ratatouille: The TikTok Musical was paid for their participation and helped support other theater workers with their work through the musical’s enormous contribution to The Actors Fund.

Besides its drawbacks, the Ratatouille musical proved a wholesome delight to all who miss the theatre world. Is this digital innovation the future of the art? Probably not. Nevertheless, we adored Ratatouille: The TikTok Musical for what it was: an echoed message from the original film, one that reminds us that passion can arise from anyone and anywhere, TikTok meme or not. We weren’t expecting a whole gourmet meal from a limited-budget virtual production, especially when our favorite theaters still remain closed to visitors—but we’re glad we at least got an appetizer.