Disney Singers No One Talked About Until A Spicy Love Triangle

The releases of “driver’s license,” “Lie Lie Lie,” and “Skin” reveal a public fascination with the personal lives of celebrities and the lengths to which PR and marketing will go to push certain narratives. 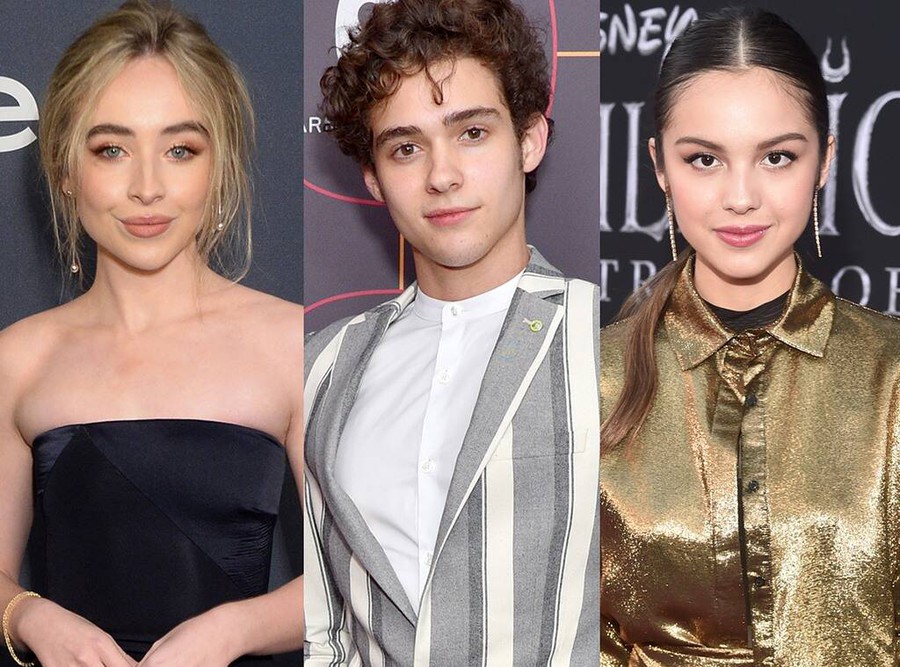 High School Musical may be 15 years old now, but high school drama never dies. Co-stars Olivia Rodrigo and Joshua Bassett, along with actress and singer Sabrina Carpenter, are embroiled in a new love triangle—what’s more, all three have released individual songs alluding to the situation.

For those not up to date, Rodrigo and Bassett play couple Nini Salazar-Roberts and Ricky Bowen in High School Musical: The Musical: The Series, the mockumentary musical drama series based on the original High School Musical film series. The two were rumored to be dating before Bassett was spotted with Carpenter, dashing fans’ hopes for a Gen Z Zac Efron and Vanessa Hudgens, who dated while starring as Troy and Gabriella in the original High School Musical. Some people thought Rodrigo and Bassett had been linked together for marketing purposes, others thought the two had quietly broken up, and everyone forgot about it.

That is, until Rodrigo released “driver’s license” earlier this year. Obliquely referring to both Bassett and Carpenter, Rodrigo sings about getting her heart broken, crying while she drives alone through the suburbs (as teenagers do). The song was a massive hit, debuting at #1 on the Billboard Hot 100, and drew everyone’s attention to the Rodrigo-Bassett-Carpenter drama. Bassett then released “Lie Lie Lie,” and Carpenter soon followed with “Skin.” Fans started connecting the dots between all three songs, pointing out lyrics and social media posts equally as “evidence.” So how do the three songs compare?

In terms of musical and lyrical quality, “driver’s license” is the clear winner by far. Rodrigo’s lyrics reveal a gift for storytelling not unlike early Taylor Swift releases such as “Fifteen” (incidentally, both Rodrigo and Carpenter have cited Swift as a musical influence), while musically, “driver’s license” plays to its strength of simplicity. Piano is the main instrumentation, with little background percussion to back it up, highlighting Rodrigo’s voice in all its teenage angst; a keyboard also appears in the music video, a nod to both Rodrigo’s relatability as just another heartbroken teenage girl (when she’s sad she writes songs about her feelings!) and her immense vocal and musical talent (unlike most of us, she actually sounds good when she sings about her feelings!). This retreads common ground from “All I Want,” which Rodrigo wrote for High School Musical: The Musical: The Series, but “driver’s license” surpasses its predecessor with its soaring bridge. Rodrigo lists completely mundane objects like “Red lights, stop signs” before desperately singing “’Cause I still fuckin’ love you,” juxtaposing the normalcy of heartbreak with its isolation. It’s classic Gen Z all the way up to the song’s popularity, initially exploding on TikTok before crossing over to radio airwaves.

“Skin” is, in some ways, the antithesis of “driver’s license.” Part of the mass appeal of “driver’s license” is its ability to tell a common story with just enough personal details to make it uniquely Rodrigo’s. Everyone can relate to “driver’s license” because everyone knows the feeling of being 17 and feeling like the world is falling down around you, but only Rodrigo sees Bassett “in the white cars, front yards” because everything that reminds her of him is ordinary and boring like he is. Conversely, “Skin” is a diss track thinly veiled as an empowering self-love song that literally no one can relate to. To give Carpenter some credit, a few Google searches reveal a budding acting resume (she’s recently starred in Netflix’s Work It, and like Rodrigo and Bassett, got her start on Disney with the series Girl Meets World) and significantly better songs than “Skin.” Perhaps the lazy songwriting in “Skin” can be excused by Carpenter’s need to capitalize on the Rodrigo-Bassett drama while it’s still relevant, or perhaps it was Carpenter’s PR team that forced this lackluster response.

This, however, brings up an interesting argument of whether PR and marketing influence a singer-songwriter’s narrative autonomy; people love “driver’s license” because they believe Rodrigo genuinely had her heart broken, but to what extent is the animosity in the lyrics of “Skin” and “Lie Lie Lie” an attack on Rodrigo, and to what extent are corporate machinations pushing the narrative of a heartbroken girl? Given the amount of control PR teams frequently have over celebrities’ lives, it’s likely everyone is reading too much into this drama—which has certainly benefited Rodrigo, regardless of her original intentions. As a result, “Skin” fails not only as a song but also at reversing the narrative surrounding Carpenter, who probably needs to hire a better PR team. Everyone wants to find out if Carpenter really is “that blonde girl” mentioned in “driver’s license,” but no one cares if “blonde was the only rhyme,” as Carpenter mockingly suggests in “Skin.”

I wish I had more to say about “Lie Lie Lie” than the fact that it… exists. It’s a song, although it might be better called a product. “Lie Lie Lie” may not even be about Rodrigo; Bassett first started writing the song two years ago, and given the release dates for “driver’s license” and “Lie Lie Lie,” the visual similarities in the two music videos could be a coincidence. But fans and gossip magazines alike have latched onto this narrative, making the entire song sound like one long PR sound bite. Rodrigo and Bassett purportedly writing songs about each other is nothing new, but writing conflicting stories? That’s found money. I still think “Lie Lie Lie” is a better song than “Skin,” mostly because I appreciate Bassett’s production and PR team’s efforts to salvage it, but as with Bassett himself, I struggle to see any appeal. “Lie Lie Lie” just sounds like a rejected B-side from the debut album of a former boy band member who failed to reach the same individual success as his groupmates; it’s the sort of song that even the most diehard stan will only stream once or twice before admitting that it’s really boring.

Of course, the drama surrounding these three songs is anything but. There’s the underlying theme of Rodrigo as the innocent victim and Bassett as the villain in this story, with Carpenter as Bassett’s somewhat sympathetic accomplice (depending on if you believe she wrote and chose to release “Skin”). Everything is “evidence,” up to and including Rodrigo and Bassett’s castmates leaving supportive comments on Rodrigo’s release announcement but not Bassett’s. It’s a brilliant example of how narratives can drive and determine popularity and how traditional media outlets have been usurped by social media, further breaking down the barrier between celebrities’ personal and public lives.

Marketing, narrative, and image have always been key to a celebrity’s staying power. It’s why the original High School Musical trilogy practically printed money: Efron and Hudgens’s onscreen chemistry translated into a real-life relationship built on the loving foundations of publicity, merchandise, and intense media scrutiny. It’s why K-pop idols, whose profitability frequently rests on wish fulfillment and public perfection, have notoriously strict no-dating clauses written into their contracts. It’s why, before Riverdale became a flaming garbage heap of lazy writing and a cast who frankly couldn’t care less, the media raved about Lili Reinhart (Betty Cooper) and Cole Sprouse’s (Jughead Jones) relationship (onscreen, they played high school students in love! Offscreen, they were young adults in love!) but tried not to talk about KJ Apa (Archie Andrews) actually dating a high schooler. For celebrities, everything can be a commodity.

Pitting Rodrigo and Bassett’s solo releases against each other as two sides of a breakup creates a narrative of tension between the two. It invites people to wonder if their off-screen drama will be translated to their on-screen roles (with High School Musical: The Musical: The Series airing a holiday special to tide fans over until its second season). Carpenter’s “Skin” only fuels this tension: Carpenter is the “other woman,” not part of High School Musical: The Musical: The Series— by choosing to respond to “driver’s license,” she forces herself into the Rodrigo-Bassett drama, renewing interest in all three singer-actors and their songs.

It’s especially interesting to note how social media scrutiny has both clarified and blurred the Rodrigo-Bassett-Carpenter story. Break-up and revenge songs are nothing new: just look at Taylor Swift’s “Better than Revenge” and the Jonas Brothers’ “Much Better” or Britney Spears’s “Everytime” and Justin Timberlake’s “Cry Me a River” (both Spears and Timberlake are also former Disney stars). With the advent of social media, though, the narratives of these songs can be enforced in real-time, with each new post or fan theory snowballing into the next. Rather than wait for awkward, vaguely invasive interviews, celebrities (or their PR teams) can choose to have their own say through subtweets, stories, comments, and likes. For Rodrigo, Bassett, and Carpenter, all young, tech-savvy, and with arguably greater social media freedom than more established names, this outlet is all the more important. With everything intensely scrutinized and memorialized on ~the internet~, actions like Bassett’s praise of “Skin” can be perceived as both supporting Carpenter and slighting Rodrigo. The narratives fuel themselves.

Overall, the Rodrigo-Bassett-Carpenter drama is publicity genius for Disney; it’s great for Rodrigo, as “driver’s license” becomes even more popular; less so for Bassett and Carpenter, who’ve been anointed as villains by social media and who released mediocre, if not bad, songs anyway. But at the heart of it? All news is good news, and there’s been plenty of that.