The Suicide Squad Reboots Franchise With Guts and Glory 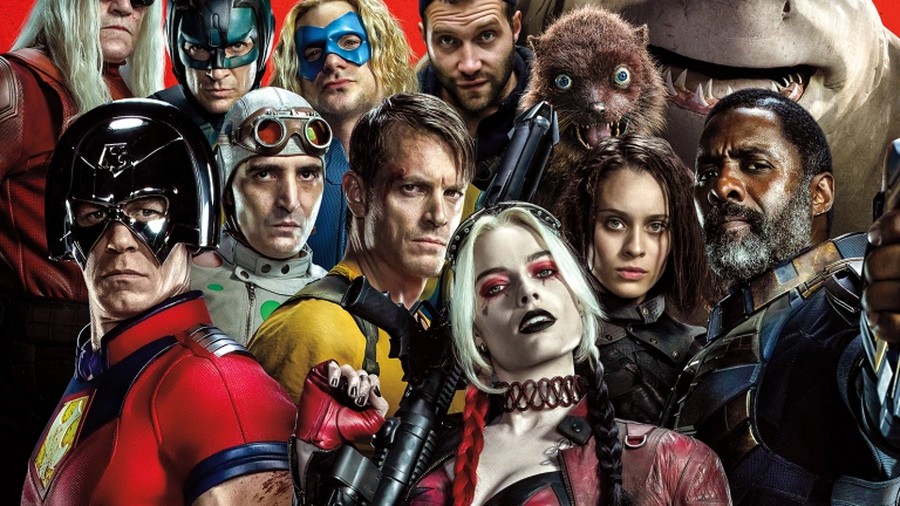 The cast of The Suicide Squad.

Writer-director James Gunn (Guardians of the Galaxy) ambitiously reintroduces DC Comics fans to the infamous ragtag team of antiheroes in The Suicide Squad (2021). Viciously violent and saturated with crude humor that fits its nihilistic bleakness, the semi-sequel, semi-reboot unapologetically sets aside any obligation to serve as an expository reference to the DC extended universe. Rather, neither confirming nor denying its relation to David Ayer’s Suicide Squad (2016), it carries its own and revels in the unpredictable, gory chaos of its titular villains.

As a comic-book adaptation, The Suicide Squad applies the tried-and-true superhero film formula. Like its predecessors in the superhero genre, it combines the Western film genre’s standoffs and general lawlessness and the heist subgenre’s use of a morally gray ensemble of skilled, but wearied, individualists to supplement its easy-to-follow storyline. Leading a mostly new cast of antiheroes, Viola Davis reprises her role as Amanda Waller, who assigns the black ops squad Task Force X, led by veteran Colonel Rick Flag (Joel Kinnaman), to a mission on the fictional island Corto Maltese. Joining Flag are familiar faces Harley Quinn (Margot Robbie) and Captain Boomerang (Jai Courtney) as well as a long list of new recruits from Belle Reve prison, including Bloodsport (Idris Elba), King Shark (Sylvester Stallone), Peacemaker (John Cena), Polka-Dot Man (David Dastmalchian), Ratcatcher 2 (Daniela Melchior), Savant (Michael Rooker), and Blackguard (Pete Davidson). The mission’s objective serves as the main plot: Waller orders that Task Force X infiltrate the island, which has suffered a violent coup by dictator Silvio Luna (Juan Diego Botto), and eliminates the danger posed by Nazi-era laboratory Jötunheim, which holds within its fortress an alien experiment called Project Starfish. A question, however, remains: Is there an underlying motive behind Waller’s determination to see Project Starfish erased from history?

The strength of Gunn’s vision comes less from the generic plot but rather from how his flawed characters depict the vileness of the carceral system and governmental dismissal of human life as expendable commodity. Serve or die. Waller exhibits a cold-hearted ruthlessness that far surpasses her more lenient 2016 counterpart, implanting bombs and trackers into her inmates’ necks to ensure their loyalty. Even before the mission, she threatens to incarcerate Bloodsport’s daughter into a prison with the highest mortality rate in the nation should Bloodsport refuse her offer to join Task Force X—Machiavellian to the point that her own personnel question her tactics. Ratcatcher 2, whose rodent friends kept her warm as she slept on the streets of Portugal, turned to crime in a desperate attempt to find her American dream after the death of her father (Taika Waititi), who passed away from a drug overdose. From a more meta perspective, Gunn whimsically murders his characters, including innocent residents of Corto Maltese, with abandon, and even a huge chunk of Task Force X meet their brutal deaths before the audience can digest their brief introductions. In other words, the premise that the characters find themselves in is one of coercion, puppeted by corrupt, violent institutions that deny their existence as human beings.

Yet that’s not to say that the film feels unbearably heavy. Gunn balances the harrowing theme with crude humor, a chaotic clash that only stories like those about a villainous suicide squad can successfully mold. Stallone’s King Shark is delightfully stupid, reading a book upside down, prancing around predatory sea creatures as he declares them his new friends, and attempting to eat his own teammates for the sake of “nom-nom.” An exceptional contrast from Ayer’s Suicide Squad is the complete rehash of Rick Flag’s character: Rather than the stoic, lovesick blandness from the original, Kinnaman brings to the screen a more naïve but good-at-heart leader who does not hesitate to save a captured teammate—although our favorite harlequin needs no assistance when it comes to prison breaks—and the two proceed to hug with weapons in hand. As a personal favorite, Melchior’s Ratcatcher 2 excellently parodies stereotypical millennial laziness yet kindly sympathizes with her teammates’ traumatic backstories.

A standout scene is the effortless hilarity of a murderous competition between Bloodsport and Peacemaker, who stare each other down as they take turns creatively eliminating perceived enemy targets, saturated with squelching sound effects and the dreadful crack of breaking bones. Ultimately, they are saved by Polka-Dot Man, who nonchalantly remarks that to make killing easy, he imagines that his enemies bear his mother’s face—a horrifyingly amusing delivery from Dastmalchian that effortlessly unravels his character’s trauma as a victim of human experimentation.

I must also applaud the creative cinematography, although Gunn does occasionally seem to overcompensate with bloodbaths for the coveted R rating. Stylistically, the chapter titles are composed of background material to guide the audience through the film’s nonlinear trajectory. The first chapter, “3 Days Earlier,” for instance, is written on bubbles forming on a toilet seat. In other notable features, we witness a fistfight from the reflection of a character’s shiny helmet, following the fighters staggering around the room. And in a gruesome close-up, the camera zooms in on the still-moving eyes of a decapitated head mid-battle. Gunn also refreshingly executes constant tonal shifts to establish one hell of an emotional roller coaster, switching from a romantic collage to sudden murder to a flashback from a few days prior without much warning.

Nevertheless, The Suicide Squad is not without its criticisms. Most notably, Gunn struggles with Robbie’s Harley Quinn, suspending her in a confusing position as both supporting character and main superstar. As aesthetically wonderful as her escape was, brimming with colorful floral explosions that parallel her insanity, it felt detached from both the other characters who weren’t given such elaborate solo moments and Harley’s subsequent scenes as a watchful observer to the rest of the team. Additionally, the last quarter of the film dragged, lacking in depth beyond a simple objective to defeat the cartoonishly designed alien starfish. For a premise that strives to subvert the expectations within the superhero genre, I was disappointed to see that The Suicide Squad fell right back into it for a tidy resolution.

That said, The Suicide Squad brings to DC an entertainingly fresh individuality that almost wipes away the foul aftertaste of the 2016 original. Almost. But, as Colonel Flag’s shirt cheekily reads “obstáculos son oportunidades” (“obstacles are opportunities”), Gunn’s reboot-sequel gorefest triumphantly made the best out of our hesitancy—my hopes have risen for this promisingly strong franchise.