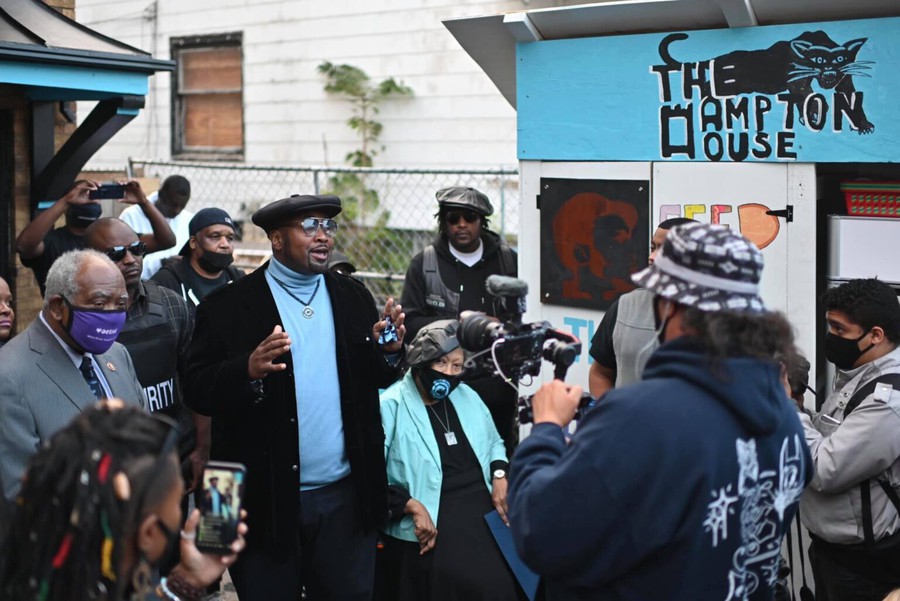 Fred Hampton Jr. and his mother Akua Njeri at the Black Panther 55th Anniversary Celebration outside of the Hampton House in Maywood, IL.

Friday, October 15, marked 55 years since the Black Panther Party (BPP) was founded in Oakland, California, and 53 years since the late civil rights activist Fred Hampton joined the BPP’s Illinois chapter, which he later chaired. Under Hampton’s leadership, the Illinois BPP chapter set up and oversaw “survival programs,” initiatives that offered free food, clothing, and busing primarily to impoverished Black communities. At its peak, it was one of the largest BPP chapters in the country.

As part of the celebrations for the chapter’s 55th anniversary, Fred Hampton Jr. announced the launch of an official application for city historic landmark status for the “Hampton House.” The Hampton House was Fred Hampton’s childhood home in Maywood, IL, 12 miles west of downtown Chicago, and the location of the 55-year celebration held earlier this month.

Hampton Jr. is Fred Hampton’s son and the current chairman of the Black Panther Party Cubs (BPPC). Along with his mother, Akua Njeri, and local organizations such as the Best of Proviso Township, Engaged Berwyn, and Suburban Unity Alliance, Hampton Jr. started the “Save the Hampton House” campaign, which aims to have the house recognized as a historic landmark.

The Save the Hampton House coalition filed the historic landmark application with the city of Maywood, IL, where the property is located. The application, which includes extensive information regarding the historical significance and architectural details of the house, is now pending approval from the Maywood Historic Preservation Commission.

Among supporters of the campaign are U.S. Representatives Bobby Rush (IL-1st) and Danny K. Davis (IL-7th), who wrote letters endorsing the efforts of the Save the Hampton House coalition. The campaign has also garnered support through an online petition that has received nearly 5,000 signatures to date.

According to a press release statement made by the coalition, new additions to the Hampton House are aimed at teaching both young people and adults about the legacy of Fred Hampton and his family as well as about the significance of the house in the context of the city of Maywood, Proviso Township, and American history as a whole. In addition to the launch, the 55th anniversary celebrations also featured the unveiling and dedication of a new People’s Bench, a new version of an old bench that dozens of famous icons and community leaders/members sat on outside the Hampton House; an official Little Free Library; an updated “Feed ‘Em All” Community Fridge; a Little Free Pantry; and a work of art that was created from the original Hampton family bench.

To Hampton Jr., support from the South Side community was integral to the success of the BPP in Chicago. “To this day, you can literally see the charge, the life, displayed [in people] with the mere mention of Chairman Fred and the Black Panther Party,” he told The Maroon in an interview. “If you go through the streets of the South Side of Chicago, people [remember] the organizing that Chairman Fred Hampton did with the help of the Rainbow Coalition.”

The formation of the so-called Rainbow Coalition—an interracial alliance with other Chicago activist groups such as the Young Lords (Puerto Ricans), the Young Patriots (White Southerners), and the Blackstone Rangers street gang—was one of the many initiatives Fred Hampton oversaw in the year he was chairman of the BPP. Though he grew up in Maywood, Hampton had an impact that extended far into the South Side and beyond. Two years after graduating from Proviso East High School, Hampton became president of the BPP’s Chicago chapter in December ​​1968 and chairman of the Illinois BPP chapter soon thereafter. During his tenure, Hampton oversaw a network of free medical clinics, the distribution of up to 4,000 free breakfast meals daily, and transportation programs to get people to and from prisons to visit incarcerated loved ones, all in addition to the Rainbow Coalition’s formation.

The growing power of the Illinois BPP chapter drew the attention of authorities and backlash from anti-civil rights groups. On December 4, 1969, Hampton and BPP Defense Captain Mark Clark were assassinated by the Chicago Police Department. They were just 21 and 22 years old, respectively. The raid-turned-assassination was part of COINTELPRO, an illegal FBI operation targeting leftist political groups. Hampton’s fiancée, Akua Njeri (then Deborah Johnson), was also present at the scene but was not shot at due to the fact that she was pregnant with Hampton Jr., the chairman’s only son.

“Chairman Fred Hampton of the Black Panther Party represents what we refer to as a ‘real model’ instead of ‘role model,’” Hampton Jr. said. “People in all walks of life throughout the world can relate to the legacy of Fred Hampton.”

The BPPC is comprised of the descendants of the original BPP members. Hampton Jr. recognizes that the BPPC is not exactly what the BPP used to be despite the fact that many of the same issues the BPP was dealing with fifty years ago are ongoing. He attributes much of the decline in party membership, organizing energy, and support to misinformation spread about the Black Panthers. Hampton Jr. also pointed to a fear of retaliation that many former and current supporters share.

“Law enforcement, still to this day, shoots up [Hampton’s] tombstone annually like clockwork,” Hampton Jr. told The Maroon. “Chairman Fred and Mark Clark were assassinated in a way that would terrify people for generations to come, so we have to work to keep their legacy in the minds and hearts of the people.”

In order to preserve the BPP’s legacy, Hampton Jr. called on young people, in particular college students, to join the cause of the BPPC and engage with the communities surrounding their universities. Too often, Hampton Jr. explained, students are trained in a “bubble” and learn a very subjective way of assessing the world around them.

“There’s a great divide between the students and the surrounding community,” Hampton Jr. said. “We need students. We need students to bring their skills. [To] take bourgeoisie skills and make them work in the interest of the masses,” he added, paraphrasing a quote from BPP founder Huey Newton.

As for how those interested can get involved, Hampton explained that despite all of the misinformation that circulates about the party, the Cubs “are not hard to find.”

“We’re right here at the Hampton House,” Hampton Jr. said. “Join the fight. Join the campaign. Make sure this legacy is intact in the minds and hearts of the people. Take advantage of the opportunities we have. We have people who are actually consistent throughout political seasons, even when [our ideology] isn’t popular. Come and see [the] coalition we’re building from the work Chairman Hampton did then to the work we’re doing now.”

To learn more about the Hampton House and how you can help, visit savethehamptonhouse.org.

To learn more about Chairman Fred Hampton and the Illinois chapter of the Black Panther Party, check out the feature film Judas and the Black Messiah, which was made with the support of the Hampton family.

To stay up to date on the current work of the Black Panther Party Cubs, tune in to Free ‘Em All Radio with Chairman Fred Hampton Jr.