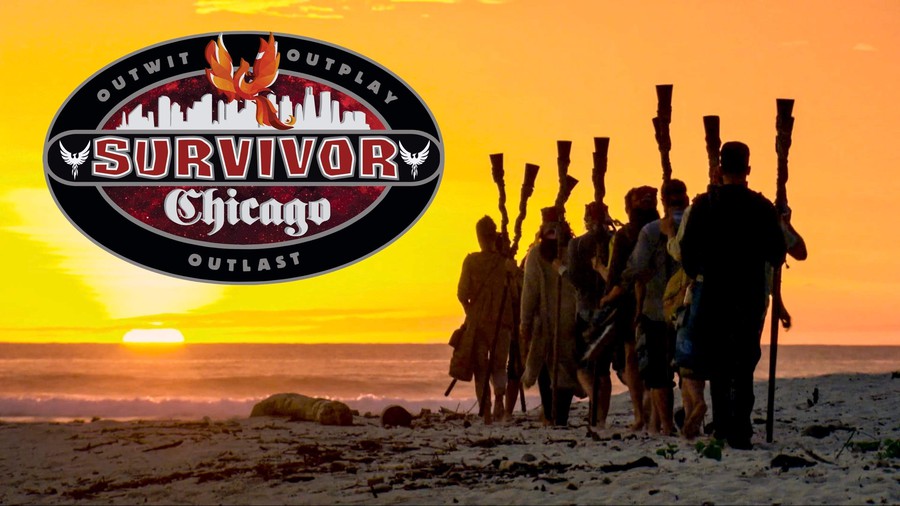 The logo for the "Survivor: Chicago" game.

I sat down with Callie Rosenzweig, a second-year in the College and the co-founder of Survivor: Chicago, on a Thursday afternoon. Compared to her COVID-tarnished first year, Callie’s autumn quarter began with a bang. Last spring, she sent out a Facebook poll asking for student submissions to participate in a UChicago game of Survivor. She received over 50 applicants for the cast, and ultimately accepted 17 players who she thought “wanted to win.” Over the summer, she and a small group of students planned the game’s logistics. What started as a click on Facebook became a fully-formed film production. Between cast and crew, the first season of Survivor: Chicago has 25 members.

Callie rediscovered her passion for Survivor over quarantine, when she interrupted the banality of life in isolation by binging old seasons. She knew that College Survivor existed and that if she wanted to play at UChicago, she would have to start it. Callie is one of the game’s hosts, a role she’s not naturally suited for (she’s a self-described introvert) but has grown into. Along with her co-host Rishabh Raniwala, she oversees the two tribes, Shinju and Medici.

The format of the game mirrors the official version: Players compete in challenges, film “confessionals”—segments in which they explain their gameplay strategy to the camera—and vote each other out at tribal council. Players strategize over text, between classes, at apartment parties, and anywhere else a UChicago student might find themselves. Maya Paloma, a fourth-year in the College and one of the producers of Survivor: Chicago, told me that the crew struggled to preserve Survivor’s competitive essence while translating the show to an “itty bitty budget.” The crew has adapted, though: At the time that I wrote this essay, the most involved challenge the players had completed was a 24-hour scavenger hunt in which they had to find and complete 51 tasks scattered around campus.

The film crew, too, has embraced the challenge of scaling down the scope of the show. Macallister “Mac” Rescorl, a third-year in the College and cinema and media studies major, is the leader of the film crew. She told me that piloting a mostly inexperienced crew has been hard but enjoyable. It’s made her proud to see members of her crew transition from never using a camera before to being able to capture live action. The film crew has been uniquely challenged while filming Survivor: Chicago. They’ve had to create cinematic shots while capturing the spontaneous, gut-wrenching moments that make Survivor special.

Much to the producers’ delight, the players have readily adopted the cut-throat nature of the game. Alex Torres, a third-year in the college and player for the Shinju tribe, says that he loves that Survivor: Chicago gives him a space to scheme. He also has been happy to meet new people, a sentiment echoed by every person I interviewed. In Alex’s own words, “Last year was garbage.” So starting this year playing an intensely social game has been “so worth it.”

Another player, Bella Howard, explained that playing Survivor: Chicago is like “good stress.” As opposed to worrying about future employment or how their P-set scores compare to those of their peers, students playing Survivor: Chicago can focus on what’s right in front of them. Maya explained to me that she’s been gratified by how involved each crew and cast member has become in the project. She credits some of the game’s success to the pandemic. She told me that she’s been “relieved” to work with other students again, and she thinks that losing almost every aspect of in-person social interaction for 18 months allowed participants to shed their trepidations and embrace an “all-in” attitude about the game. Why worry about what people will think about you when you’ve been alone for over a year?

For Maya, parts of this project still don’t feel real. She remembers the first challenge: The sun was setting on the Midway, members of the film crew were holding boom mics and monitoring cameras on tripods, Callie and Rishabh were standing in their host positions, and the players were waiting in nervous anticipation. To her, the moment felt like a dream. She had never known participating in a student project could feel so rewarding. Callie echoes Maya’s thoughts: “Sometimes I just start smiling uncontrollably,” she told me. “I’m just like so happy that we get to do this.” After living through a worldwide quarantine, the cast and crew of Survivor: Chicago have learned that happiness is not something to be shirked.

The cast and crew of Survivor: Chicago are excited to share the first season of the game with the greater UChicago community. Mac and her crew will be editing and uploading the footage to YouTube sometime in 2021. In the meantime, you can find Survivor: Chicago on Instagram and Facebook.