They’re Back, Blue, and Better Than Ever 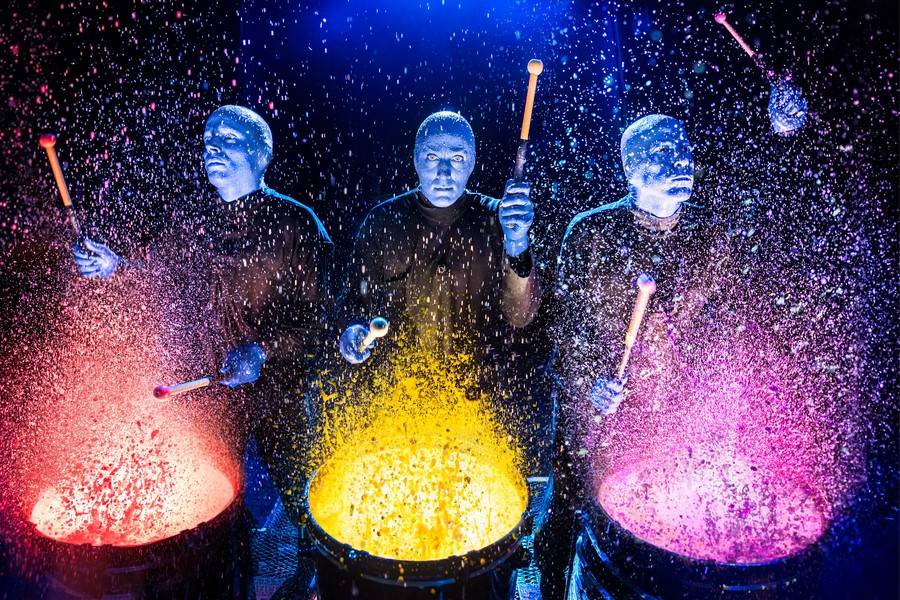 In the opening number, the Blue Men poured glow-in-the-dark paint on large bass drums so that vibrant yellow and pink rocketed upwards with each beat.

Courtesy of NYC GO and Off Broadway Week

“Will you let me know why they’re blue?” That was the most common question I got when I told people I was going to see the Blue Man Group perform at Briar Street Theatre and attend a post-show Q&A. Turns out, one of the creators of the Blue Man Group used to imagine he had a blue imaginary friend as a kid, which was one of his sources of inspiration for the Blue Man Group. The more you know. After the show, I had the opportunity to speak with Tom Galassi (Blue Man captain), Brett Presson (stage manager), and Jeff Quay (associate music director & band member). Most of my questions focused on COVID-19. To the question, “was it difficult coming back from such a long hiatus?”, the answer was an unequivocal yes. But Galassi, Presson, and Quay were quick to note that audiences need shows like the Blue Man Group as a source of positivity after quarantine. For them, this makes the COVID-19 safety adaptations to the show worth it. The band members all wore masks, which Quay noted made it more challenging for him to play the drums given how physically taxing performing already is. When they go into the audience, the Blue Men also don plastic face shields and hand out face shields to the participating audience members to wear over their masks. The three men said that when planning for their return, they went through their catalog of stunts and pieces to see which could be adapted to create a safe but still entertaining show. Even with such limited parameters, the show never felt repetitive.  The show struck a balance by assembling a medley of acts that showcased each of the members’ talents.  Every drum piece felt unique, and I was especially impressed by how they made the performances both visually and auditorily captivating. In the opening number, the Blue Men poured glow-in-the-dark paint on large bass drums so that vibrant yellow and pink rocketed upwards with each beat.

Communicating clearly when the cast is not allowed to speak is a challenge, which is why it’s understandable that the Blue Man Group’s message at points came across a bit muddled at some points in the show. In between the drum performances and the audience engagement, there were graphics on the screen warning against the allure of social media and smartphones. Even though I agreed with these messages, they felt jarring alongside the musical and comedy performances with no segue. The Blue Man Group fosters a sense of community within the audience, so I could infer that they were warning against superficial social media connections that have replaced real interpersonal communication. However, leaving this connecting entirely up to the audience made the message feel forced.

It is already impressive that the Blue Men are musicians as well as actors, but that they convey so much through facial expressions, body language, and instrumental music makes the show even more entertaining to watch. They played a variety of percussion instruments throughout the show, but one of my favorite parts was when they assembled their own instrument on stage. It was a collection of tubes that they shortened or elongated to change the pitch of the note as the tubes were struck. The beat was catchy, and it was engaging to see the instrument grow more complex as more and more tubes were tacked on. The Blue Men were also perfectly in sync with each other. They have to anticipate the actions of the others and react in real time without any verbal cues, but despite this their actions felt fluid and natural. As an audience member it never occurred to me that not being able to speak to one another was a hindrance, but I’m sure it is a huge obstacle to overcome for incoming Blue Men.

Sitting in front of me during the show was a mom and her young kid. It struck me about halfway through the performance that, due to COVID-19, this was probably the kid’s first ever concert. The Blue Man Group is an amazing first concert after over a year of quarantine; they are whimsical, engaging, and funny. Maybe I’m less critical because I was so happy to hear live music and comedy again, but the Blue Man Group perfectly matched the uplifting tone I was hoping for as life begins to return to “normal.”