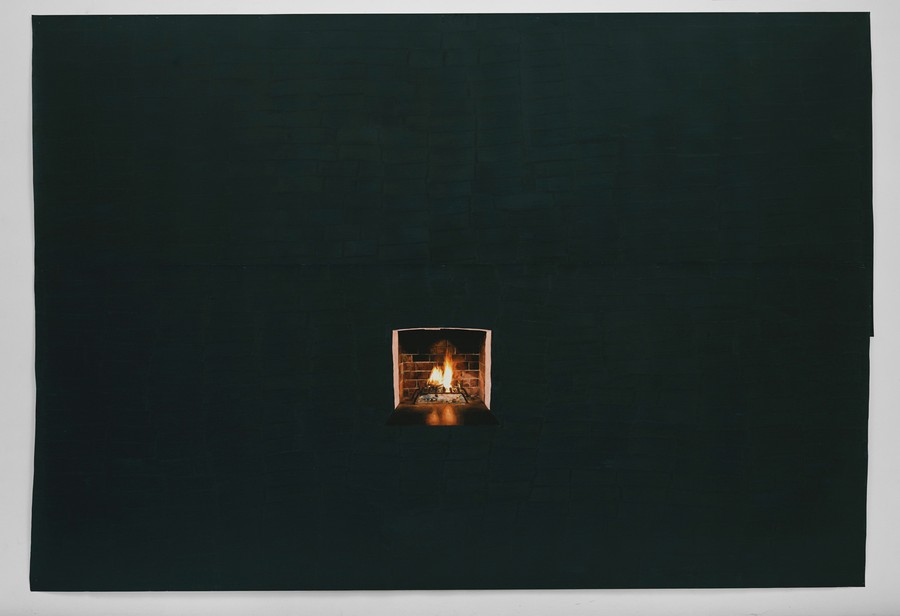 Toba Khedoori's "Untitled (Black Fireplace)" is currently on display through December 19th as a part of the Smart Museum's "Toward Common Cause" exhibition.

A great expanse of black–a void. In the lower center, an isolated fireplace. The orange flames emanate a warm glow that extends to the edge of the lacquered hearth and then...nothing. This is Toba Khedoori’s “Untitled (Black Fireplace)”, currently on display at the Smart Museum, and it moves me to a sensorial awareness of the detachment of one object from another; of myself from the world.

I walk closer. About a foot away, it occurs to me that the painting is probably larger than the average garage door and the fireplace is to scale, giving it a convincing mimetic quality. I struggle to imagine how the artwork appears at night, when the gallery lights are off. It seems to me that Khedoori’s flames would continue to glow, emitting light all on their own. The encaustic sheen of the fireplace further contributes to this luminance, reflecting the gallery light back at me.

At such a close distance, I see that the great area of black is built of thick, horizontal brushstrokes—brick-like. The paint is laid unevenly such that the trails of some bristles appear darker than others, providing a sense of enveloping depth to the void. I feel the piece absorbing me into the blackness. Several staples are visible, connecting the two sheets of paper which form this one piece; the sheets are not quite horizontally aligned, the top extending farther to the right than the bottom such that there are six sides to this artwork—not the typical rectangle. I eventually decide this material visibility undermines the arresting quality of the work, so I step away, taking a seat at the bench in the center of the space.

Even still, the fact that the piece is composed of two obviously separate sheets of paper preoccupies me. I do not want to divide the composition; certainly not in such an arbitrary way. But the work demands some sort of division, even when I ignore the two papers. There is another, more meaningful separation in this work: between fireplace and void. Those are the two important subparts of the piece, fireplace and not-fireplace. In fact, these two subparts follow a material divide in the work, for the fireplace is rendered in encaustic paint and the void in oil. I look over the border of the fireplace, noticing its sense of detachment. Where is the mantel? Chimney? A nearby basket of wood? It is terribly strange to see an object in such isolation, divorced from all context.

My eyes trace the unframed edge of the artwork, where black paint meets white wall. Though less off-putting, this too is a division as stark as fireplace and void. Never before has it dawned on me how unique the gallery is as a space, highlighting the isolation of one thing from another.

I imagine my body divorced from the context of the gallery, bench, clothes. I defy the laws of gravity, squatting precariously, back slightly hunched, arms folded awkwardly in my lap. I try to pinpoint the exact place in space and time where Julian meets other. I feel my clothes against my skin. The bench and floor beneath me. Perhaps even the light from above.

It makes me vaguely sad to feel so intensely the limit of my corporeal existence, for I know I will never cross this boundary. I am trapped inside the fireplace, alone. And what an apposite symbol the lonesome flame is for the isolation of the human mind, the human soul. Beyond the aforementioned illusion of depth to Khedoori’s uneven brushstrokes, this is why I am so easily absorbed into her void, at home with her detached fireplace. I am already immersed in a similar void of cerebrospinal fluid. I am a lonesome flame.

I sit for a while, burning and crackling, wondering if any previous Smart Museum-goers had this same experience before me, and hoping they do after. Then I would not be alone in my loneliness. I would not be the only flame. I close my eyes tight, hold for a moment, and then look over the painting once more. Then I leave.